Muslim families in the United Kingdom whose loved ones have been cremated in Sri Lanka have submitted a complaint to the United Nations, branding the South Asian country’s controversial policy “unjust and discriminatory” and calling for its immediate suspension.

Buddhist-majority Sri Lanka made cremation mandatory last March for people who die, or are suspected to have died, with coronavirus.

The move has deeply upset Muslims, because according to Islam, the dead should be buried.

Christians bury their dead, too, and some in Sri Lanka have also been hurt by the move, which came despite World Health Organization (WHO) guidelines which permit burials for people who die from COVID.

The UK complaint was lodged to the UN’s Human Rights Council (UNHRC) on Friday by the Muslim Council of Britain (MCB) in partnership with UK-based law firm Bindmans on behalf of the families.

Zara Mohammed, the secretary general of the MCB, described the country’s cremation policy as “unprecedented”.

“No other state has carried out such unjust and discriminatory measures,” she said in a statement issued on Monday. “We very much hope that the Sri Lankan government will change its policy in line with the World Health Organization advice.”

Tayab Ali, a partner at Bindmans who represents the MCB and the families, described the practice as “heartless”.

“Our clients were already suffering from the distress of losing a family member to COVID,” he said in a statement. “It is truly heartless for the Sri Lankan government to add to that distress by unnecessarily forcing the bodies of loved ones to be cremated.”

Ali also called for the UNHRC to “take immediate action on receipt of this complaint by granting interim measures to halt these cremations”.

The complaint said there was “no justification, on the facts, for the prohibition of burial maintained by the Sri Lankan government”.

“This has been recognised by multiple institutions of the UN,” it said. “There are, as scientific experts have already advised, multiple protection measures that can be put in place to protect public health without the blanket denial of the right of individuals to practise their religion and to be buried in accordance with their faith.”

Sri Lankan officials have claimed that bodies of COVID victims would contaminate the groundwater if buried.

But several experts have countered this claim, noting that if burial locations are well planned, the groundwater would not be affected.

In January, an expert panel appointed by Sri Lanka’s Ministry of Health said burying those who had died from COVID-19 was allowed, in line with precautions to curtail the pandemic.

UN special rapporteurs, for their part, have twice called on Sri Lanka’s government to reconsider its mandatory cremation policy in letters sent to authorities in January this year and last April.

In their latest note, UN experts said the practice ran contrary to the beliefs of Muslims and other minority communities in Sri Lanka, and could “foment existing prejudices, intolerance and violence”.

The WHO has said there is no evidence to suggest that cremation prevents the spread of coronavirus.

“While we must be alert to the serious public health challenges posed by the pandemic, COVID-19 measures must respect and protect the dignity of the dead, their cultural and religious traditions or beliefs, and their families throughout,” the UN experts said.

Critics of Sri Lankan Prime Minister Mahinda Rajapaksa have accused his government of using the pandemic to marginalise Muslims, who make up roughly 10 percent of Sri Lanka’s 21 million people.

More than 70,000 COVID-19 infections have been recorded in Sri Lanka since the pandemic erupted, and 365 people have died after contracting the virus, according to data collated by Johns Hopkins University School of Medicine. 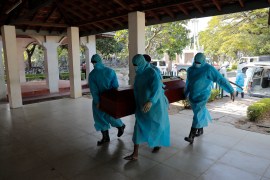 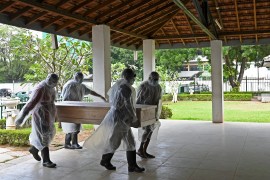 Outrage in Sri Lanka over cremation of Muslim COVID victims

Anger mounts after at least 15 Muslims, including 20-day-old baby, are cremated against family wishes. 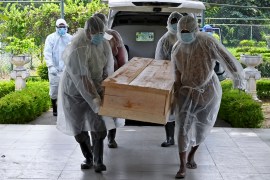 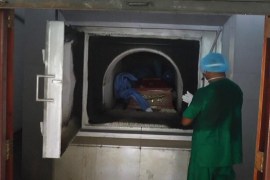 Families of Muslim coronavirus victims have refused to claim bodies in protest as cremation is forbidden in Islamic law.