The decision on Tuesday marked the first time Hong Kong’s Court of Final Appeal (CFA) ruled on a case relating to the security legislation, which Beijing imposed on the semi-autonomous city last year in a bid to quell dissent against its rule.

Lai, the owner of the pro-democracy tabloid Apple Daily, is one of more than 100 activists arrested under the law and the highest-profile figure to be remanded in custody while he awaits trial. The 73-year-old had been charged with “colluding with foreign forces” – one of the new security crimes – for allegedly calling for sanctions against Hong Kong and China.

On Tuesday, the CFA said a lower court that previously granted bail to Lai had applied an “erroneous line of reasoning” and “misconstrued” Article 42.

The decision was unanimous.

Lai was detained on December 3 and initially denied bail.

He was released for about a week after Hong Kong’s High Court reversed that decision and granted him bail of 10 million Hong Kong dollars ($1.3m) provided that he was confined to his home, gave no interviews and did not post on social media.

But he was put back behind bars after the prosecution sought to challenge the decision.

In Tuesday’s ruling, the five judge panel said the security law has created “such a specific exception to the general rule in favour of the grant of bail” and imported a “stringent threshold requirement for bail applications”.

They said the High Court did not undertake a “proper assessment” under the security law when it granted bail to Lai.

The media tycoon’s team could still make a “fresh application” for bail, the judges said, as Tuesday’s decision was of “a limited nature” – focusing on how the lower court arrived at its decision, rather than whether Lai should be bailed out or not.

Legal analysts were closely watching the case for an indication of whether Hong Kong’s judiciary will serve – or even can serve – as any kind of constitutional brake against the security law.

The judiciary can only interpret laws, which are usually passed by Hong Kong’s semi-elected legislature. During challenges to new legislation, judges balance the wording of a law against common law traditions and core liberties such as freedom of speech and presumption of bail that are enshrined in Hong Kong’s mini-constitution and its Bill of Rights.

But the national security legislation was drafted directly by Beijing and looks set to trump any other legislation in the event of a dispute.

Antony Dapiran, a Hong Kong based lawyer and author, said Tuesday’s ruling demonstrated that the national security law “itself is not open to challenge on constitutional grounds”.

But the ruling showed “bail is possible” in national security cases. While section 42 of the law “creates a presumption against bail”, it is not a no-bail provision, he tweeted.

“It is now open to Lai to apply for bail again in light of this ruling: He would need to convince the court that bail conditions would prevent him from committing acts endangering national security,” Dapiran wrote.

It is now open to Lai to apply for bail again in light of this ruling: he would need to convince the court that bail conditions would prevent him from committing acts endangering national security. See para 63 & 81. Lai stays in custody in the meantime. pic.twitter.com/jeA6O65ybu

In Hong Kong’s complex constitutional hierarchy, the ultimate arbiter of the laws is Beijing’s Standing Committee, which has shown an increased willingness in recent years to wade into legal arguments and make pronouncements.

China’s state-run media have already declared Lai guilty and made clear authorities expect Hong Kong’s judges to side with Beijing on national security.

Senior Chinese officials have recently backed calls to “reform” Hong Kong’s judiciary, something opponents fear signals support for a more mainland-style legal system that answers to the Communist Party and where convictions are all but guaranteed.

In a tweet, the state-run Global Times tabloid hailed Tuesday’s ruling against Lai, describing him as a “major secessionist”.

Lai was arrested in August when about 200 police officers raided the newsroom of his Apple Daily tabloid newspaper.

The tycoon has been a frequent visitor to Washington, DC, meeting officials, including former Secretary of State Mike Pompeo, to rally support for Hong Kong democracy, prompting Beijing to label him a “traitor”.

Lai stepped down last year as chairman of Next Digital, which publishes Apple Daily, a popular tabloid newspaper known for its feisty and critical coverage of China and Hong Kong. 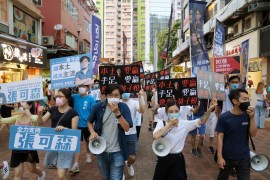 Politicians and activists arrested in early morning raids in crackdown linked to ‘primaries’ held by the opposition. 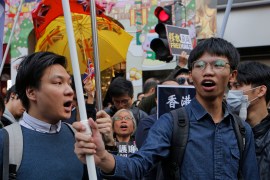 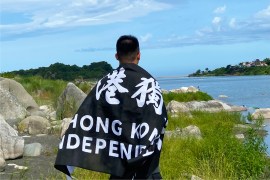 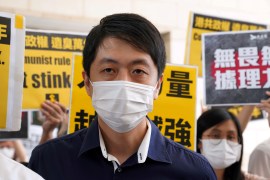 Former legislator Ted Hui is the latest to go into exile, as cases mount against those who took part in 2019 protests.