Left-wing economist Andres Arauz is heading to an election runoff in Ecuador after voters cast their ballots across the South American nation on Sunday, but his opponent in the next round of voting remains unclear.

Indigenous leader Yaku Perez, who had been a distant third in polls ahead of the vote, is neck-and-neck with Guillermo Lasso, a former banker and candidate of the right-wing Creating Opportunities (CREO) party.

With nearly 98 percent of the vote counted, Perez led Lasso by less than a quarter of a percentage point, making a recount likely. Either candidate could request hand recounts.

Arauz had secured 32.19 percent of the vote, ahead of Perez with 19.81 percent and Lasso with 19.6 percent, the Reuters news agency reported.

Whoever finishes in second place will go up against Arauz on April 11.

On Monday, Perez said his vote count in three provinces was well behind the vote count for his party in the legislature, which he said was evidence of vote tampering. He did not present any evidence of fraud.

“Let’s open the ballot boxes in Manabi, Guayas and Pichincha,” Perez said during a news conference, referring to the three provinces.

The elections council’s website said 13 percent of poll statements show some type of inconsistency, meaning they would have to be reviewed once all the votes are counted.

Perez and his supporters began a vigil on Sunday night outside a Quito hotel where election authorities were counting votes, vowing to prevent voter fraud.

Lasso, in a celebratory rally in his home city of Guayaquil, said that a full review of poll statements would show he would make the runoff.

The country’s 13.1 million voters are choosing a successor to unpopular President Lenin Moreno and 137 members of Congress.

A runoff was expected – and Arauz, Lasso and Perez had been the top three contenders in a busy field of 16 presidential candidates.

“We won!” Arauz wrote on Twitter on Sunday evening, as early poll results were released, urging his supporters to wait for the official results to celebrate.

Arauz, who has said he plans to return to the socialist policies of former President Rafael Correa, told the AFP news agency on Monday that he hoped victory in the runoff would “build a project of national unity”.

Arauz has promised to give $1,000 to one million Ecuadorian families and to stimulate the economy, hard-hit by the COVID-19 pandemic.

Lasso is seen as more business-friendly and has promised to cut taxes and create one million jobs by attracting international investment, while Perez ran on an environmental platform with the support of the country’s Indigenous communities.

The Organization of American States (OAS), which sent election observers to Ecuador to monitor the vote, said election night results “showed the need for a second electoral round” with a clear first-place finisher, and “a narrow margin” between the second and third-placed candidates.

In a statement on Monday, the OAS called on “the population to calmly await the results, the political actors to behave responsibly, and the National Electoral Council to provide guarantees of transparency, certainty and legal security to all those involved in the process”.

US State Department spokesman Ned Price also urged people to “exercise patience” until all the ballots are tallied, “and work to resolve conflicts in a peaceful and transparent manner, and in accordance with Ecuador’s constitution and established norms and processes”. 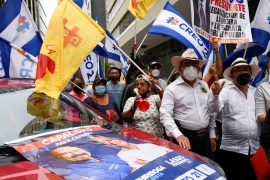 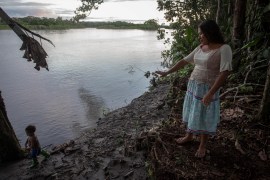 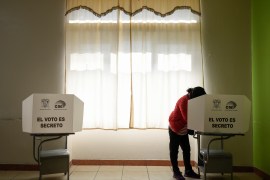