US Secretary of State Antony Blinken has discussed “key priorities” for President Joe Biden’s administration, including the war in Yemen, in his first phone call with Saudi Foreign Minister Faisal bin Farhan on Friday.

In a statement on Saturday afternoon, State Department spokesman Ned Price said Blinken and bin Farhan “discussed regional security, counterterrorism, and cooperation to deter and defend against attacks on the Kingdom”.

“The Secretary outlined several key priorities of the new administration including elevating human rights issues and ending the war in Yemen,” Price said.

The call comes after Biden announced on Thursday he was ending United States support for Saudi Arabia’s war in Yemen, where it has been involved since 2015 to shore up the government against the Iran-aligned Houthi rebels.

Biden also said his administration would end all support, including connected arms sales, for  Saudi Arabia in the war, which has led to what the United Nations describes as the world’s worst humanitarian crisis.

He also appointed veteran diplomat Timothy Lenderking, who has wide knowledge of the region, as US special envoy for Yemen.

The kingdom was eager to cooperate with United States President Joe Biden’s administration to uphold “security and stability” in the region, it said.

Blinken and bin Farhan also discussed the “historical and strategic relations” between the two countries, the agency added.

Blinken’s first call to a Gulf state since assuming his new role was to the United Arab Emirates’s minister of foreign affairs on Thursday.

Saudi Arabia reacted to Biden’s decisions related to the Yemen war by welcoming his “commitment to cooperate with the kingdom to defend its sovereignty and counter threats against it”, SPA said.

Price, the State Department spokesman, earlier this week noted that Biden made clear the US still supported Saudi Arabia outside the Yemen war.

He described the administration’s stance as a “return to standard procedures” in reviewing every arms deal.

In ending support for the Saudi war in Yemen, Biden was fulfilling a campaign promise to activists who have been horrified by the suffering.

The grinding six-year war in Yemen has killed tens of thousands and displaced millions.

Yemen’s internationally-recognised government, which is backed by Saudi Arabia, and the Houthis have welcomed Biden’s stance and the renewed push to end the conflict.

A US State Department official on Friday also said the Biden administration intends to revoke a “terrorist” designation for Yemen’s Houthi movement in response to the country’s humanitarian crisis.

The Norwegian Refugee Council (NRC) welcomed that decision, saying the designation “would have had catastrophic humanitarian consequences” on the war-torn country.

“This is a sigh of relief and a victory for the Yemeni people, and a strong message from the US that they are putting the interests of Yemenis first,” said NRC’s Yemen country director, Mohamed Abdi, in a statement.

“Along with President Biden’s announcement that he will be ending US support for the war in Yemen, this is a rare glimpse of hope for a country where six years of brutal war has killed and maimed tens of thousands of people, destroyed houses, farms, markets, schools and hospitals, and pushed civilians to the cliff edge of famine.”

The president is preparing for the US to take on a more active role in ending the protracted civil war in Yemen. 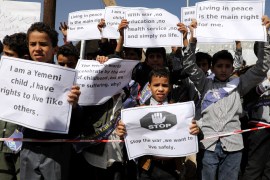 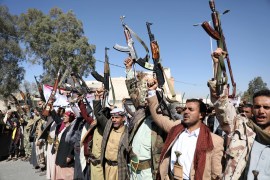 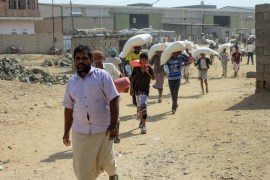