The lawyer for Myanmar’s elected leader Aung San Suu Kyi and overthrown President Win Myint said the pair was under house arrest and that he was unable to meet them while hundreds of students and teachers joined the anti-coup protests.

Lawyer Khin Maung Zaw said on Friday that he was seeking the duo’s unconditional release but had been told they were still under investigation.

“We expect justice from the judge, but it is not certain. We hope for the best but prepare for the worst. Of course, we want unconditional release as they have not broken the law,” her lawyer told reporters in the capital, Naypyidaw.

Later on Friday, mobile operators and internet service providers in Myanmar received a government directive to block access to Twitter and Instagram in the country until “further notice”, according to Norwegian telecom Telenor.

The announcement came a day after authorities ordered internet providers to block Facebook.

In a statement, Human Rights Watch (HRW) urged the military junta to immediately lift the internet restrictions, release all detained persons since the coup and end the harassment of journalists.

“A news and information blackout by the coup leaders can’t hide their politically motivated arrests and other abuses,” said Brad Adams, Asia director of HRW.

Meanwhile, nearly 300 members of Suu Kyi’s National League for Democracy (NLD) party declared themselves to be the sole legitimate representatives of the people and asked for international recognition as the country’s government while protests against the military takeover swelled.

They said they had named a committee to carry out the functions of the parliament, according to the NLD’s Facebook page.

In a letter to the United Nations and the international community posted on social media, the party also asked for targeted sanctions and for businesses to cut ties with the military, which has vast and lucrative holdings.

The politicians had been set to take their seats on Monday in a new session of parliament, when the military detained them and announced it was taking power for a year.

Most of them have since been released.

On the streets of Myanmar, hundreds of students and teachers joined the anti-coup protests on Friday to demand the military hand power back to elected politicians.

Demonstrations spread to several parts of the country, even in the tightly controlled Naypyidaw.

Opposition to the coup began initially in Yangon, the country’s largest city, with people banging pots and pans outside their windows each evening to avoid being targeted. But now people are being more vocal and visible, and students and medical workers have led the charge.

About 400 protesters in total rallied at two universities in Yangon, some flashing a three-fingered salute, a sign of resistance borrowed from The Hunger Games movies, that they adopted from anti-government protesters in neighbouring Thailand.

“We will never be together with them,” lecturer Nwe Thazin said of the military at a protest at the Yangon University of Education. “We want that kind of government to collapse as soon as possible.”

At the city’s Dagon University, meanwhile, many carried papers printed with images of red ribbons – the symbol of the civil disobedience campaign that activists and Suu Kyi’s party has called for.

“I believe we will have to lead this movement,” said student Min Han Htet. “All the people, including the students, will have to bring down the military junta. We will have to make sure that juntas never appear again in the next generation.”

There was also at least one demonstration on Friday in Naypyidaw – highly unusual for the city, purpose-built by the previous military government  – which has a heavy military presence and lacks the tradition of protest of the former capital, Yangon. 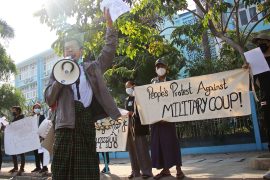 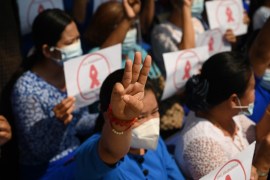 Hundreds of teachers and students protest across the country against Monday’s military take over of civilian gov’t. 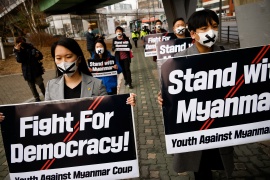