Myanmar police have filed charges against overthrown leader Aung San Suu Kyi for illegally importing communications equipment and sought her custody until February 15 for investigations, according to a police document.

The Nobel laureate was overthrown and detained by Myanmar’s army on Monday, in a coup that cut short a transition to democracy in a takeover that has drawn condemnation from the United States and other Western countries. Aung San Suu Kyi’s National League for Democracy (NLD) won the November 9 election in a landslide but the military claimed it was marred by fraud and justified its seizure of power on those grounds. The electoral commission has said the vote was fair.

The police on Wednesday filed a request with a court detailing the accusations against 75-year-old Aung San Suu Kyi, claiming that walkie-talkie radios had been found in a search of her home in the capital, Naypyidaw. It said the radios were imported illegally and used without permission.

A separate document showed that the police had filed charges against overthrown President Win Myint for offences under the Disaster Management Law.

“It could be anything from a fax machine to a walkie-talkie. It’s a notorious law because it was used under the former military regime all the time to imprison political prisoners,” said Fowle.

“There was a lot of criticism for the NLD for not changing that law when they came to power because many of their members have been imprisoned under it,” she added.

There was no immediate comment from the police, the government and the court.

Later on Wednesday, United Nations spokesman Stephane Dujarric said the charges against Aung San Suu Kyi “just compound the undermining of the rule of law in Myanmar and the democratic process”.

Thomas MacManus, director of the International State Crime Initiative at the Queen Mary University of London, told Al Jazeera Aung San Suu Kyi was charged under a law that has been used in the past to target activists.

“It’s a very spurious charge … that is not based on the rule of law,” MacManus said.

“We didn’t have a fairly good rule of law before Monday and we certainly don’t have any now. These are trumped-up charges on behalf of the military as a way of somehow justifying her detention – but there’s no justification.”

The NLD said earlier in a statement that its offices had been raided in several regions and urged authorities to stop what it called unlawful acts.

Meanwhile, the Group of Seven largest world economies condemned the coup and said the election result must be respected.

“We call upon the military to immediately end the state of emergency, restore power to the democratically-elected government, to release all those unjustly detained and to respect human rights and the rule of law,” the G7 said in a statement on Wednesday.

Aung San Suu Kyi endured about 15 years of house arrest between 1989 and 2010 as she led the country’s democracy movement. She remains hugely popular at home despite damage to her international reputation over the expulsion of Rohingya in 2017.

More than 700,000 Rohingya people were forced to flee to neighbouring Bangladesh in the wake of a brutal military crackdown in August 2017 that the UN said was executed with “genocidal intent”.

Staff at many government hospitals across the country of 54 million people stopped work or wore red ribbons as part of a civil disobedience campaign.

People in Yangon said they would show their opposition to the military coup by banging on pots and pans again on Wednesday night.

Tuesday’s sustained, nocturnal cacophony was the first public sign of protest against Monday’s power grab that reinstalled the generals in total control after a brief period of elective democracy.

People all over Yangon and other cities and towns across the country joined in, leaning out of doors, on balconies or just within their sitting rooms as part of a campaign of civil disobedience urged by Aung San Suu Kyi.

“It is likely to see more [civil disobedience] happening,” reported Fowle. “We’ve already seen government staff – including hospital staff in Myanmar – saying that they are not going to go to work, they refuse to work under the military.

“What they’re trying to show the military regime is that they are not willing to work for them,” she added.

Michael Vatikiotis, Asia director for the Centre for Humanitarian Dialogue, said, “It is clear that people are very angry.”

“The question is what is the strategy for any organised protest. and my guess would be that the NLD itself and potential protest leaders are probably hoping that they can lull the military into a fall sense of security after a matter of couple weeks or so and then begin the protests,” he told Al Jazeera.

“Coming out straight away would probably be a foolish act, but there is no doubt that this pot-banging … indicates the very high degree of public anger.” 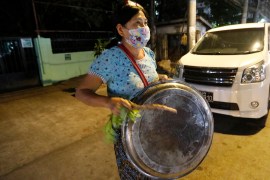 Medical staff walk away as clatter of pots and pans and the honking of car horns are heard in protest against the coup. 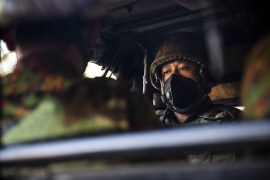 Analysis: Why is Myanmar’s military so powerful?

The military has been the most powerful institution in Myanmar since the country’s independence from Britain in 1948. 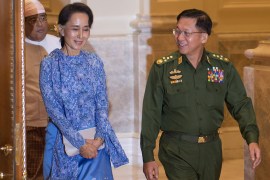 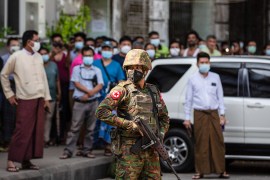 Diplomats say discussions will continue with China and Russia asking for ‘more time’.