World leaders have strongly condemned the bloodiest crackdown yet by Myanmar’s security forces against peaceful anti-coup demonstrators, in which at least 18 people were killed and dozens wounded in several cities across Myanmar, according to the United Nations’ human rights office.

UN chief Antonio Guterres on Sunday led the chorus of international condemnation against the actions of the military, which grabbed power on February 1 and declared a year-long “emergency” after alleging electoral fraud in a November election that was won by civilian leader Aung San Suu Kyi’s party in a landslide.

About 1,000 protesters demanding Aung San Suu Kyi’s government be restored to power are believed to have been detained on Sunday.

“The use of lethal force against peaceful protesters and arbitrary arrests are unacceptable,” Stephane Dujarric, UN spokesman, said in a statement.

“The Secretary-General urges the international community to come together and send a clear signal to the military that it must respect the will of the people of Myanmar as expressed through the election and stop the repression.”

Meanwhile, European Union diplomatic chief Josep Borrell confirmed in a statement the bloc would “take measures in response to these developments shortly”.

“The military authorities must immediately stop the use of force against civilians and allow the population to express their right to freedom of expression and assembly,” Borrell said in a statement.

European ministers have already agreed on sanctions against Myanmar’s military over the coup and have decided to withhold some development aid. The sanctions are expected to be finalised in the coming days and will take effect once an official notice has been published by the EU.

#Myanmar military must stop its brutal repression of peaceful protests, leaving many dead or wounded, blatantly disregarding international law. They must be held to account.
The European Union resolutely stands with the brave people of Myanmar & will take measures in response. https://t.co/owf1Yfca1s

US Secretary of State Antony Blinken condemned what he described as “the Burmese security forces’ abhorrent violence against the people of Burma”, using the country’s former name.

The United States announced new sanctions on Monday against two more generals involved in the February 1 military coup in Myanmar, after protesters were killed in a crackdown on demonstrations last weekend.

“We stand firmly with the courageous people of Burma & encourage all countries to speak with one voice in support of their will,” Blinken tweeted on Sunday afternoon.

A spokeswoman for the British Foreign Office said the “violence must stop and democracy must be restored”, while also noting the UK had already imposed sanction on the coup leaders.

“Working with the US and Canada, the UK has taken action by imposing human rights sanctions against nine Myanmar military officers, including the commander-in-chief, for their role in the coup,” the spokeswoman said.

Turkey also strongly condemned what it called disproportionate use of force by Myanmar’s army.

“We observe with deep concern that the stability in Myanmar is deteriorating after the coup,” the foreign ministry said in a statement. “We call for the necessary steps to be taken for the restoration of democracy without delay for the maintenance of peace and stability in the country and the immediate cessation of violence against the peaceful protesters,” it added.

‘We’re in this together’

Earlier on Sunday, the UN human rights office said in statement police and military forces had confronted peaceful demonstrations in several locations across Myanmar, using “lethal force and less-than-lethal force” that left at least 18 people dead and more than 30 wounded.

The crackdown came after state television announced that Myanmar’s envoy to the UN had been fired after he urged the global body to use “any means necessary” to reverse the coup.

Meanwhile, activists in a number of Asian countries and elsewhere held rallies on Sunday to support the anti-coup protesters in Myanmar.

Following a call for help from Myanmar pro-democracy campaigners, some 200 people in Taipei and dozens in Bangkok, Melbourne and Hong Kong took to the streets waving #MilkTeaAlliance signs and flags.

The hashtag, which originated as a protest against online attacks from nationalists in China, was used millions of times on Sunday. Its name originates from the shared passion for the milky drink in Thailand, Hong Kong and Taiwan.

Activists in Indonesia and Malaysia and other countries in Southeast Asia expressed their solidarity by posting messages and artwork online as part of a social media campaign.

“Myanmar activists have been very active in engaging with Milk Tea Alliance since the coup,” said Thai activist Rathasat Plenwong, who went to show his support for the Myanmar protests in Bangkok. 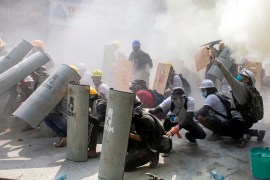 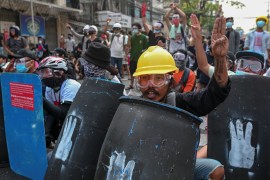 Security forces have stepped up violence against anti-coup demonstrators in Yangon and other cities in Myanmar. 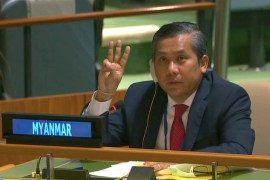 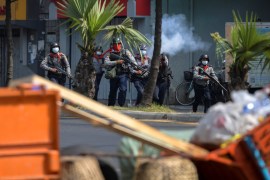