The United States military says it carried out attacks on facilities in eastern Syria used by Iran-backed militia on Thursday, following recent rocket attacks on US troop locations in Iraq.

“These strikes were authorised in response to recent attacks against American and Coalition personnel in Iraq, and to ongoing threats to those personnel,” he said.

According to the Pentagon, US fighter jets dropped seven 500-lb Joint Direct Attack Munition-guided precision bombs, hitting seven targets, which includes a crossing used by the armed groups to move weapons across the border.

An Iraqi militia official, speaking on condition of anonymity, said at least one fighter had been killed and four others were wounded.

A medical source at a hospital in the area and several local sources told Reuters 17 people had been killed. That toll could not be independently confirmed.

The Syrian Observatory for Human Rights told AFP at least 22 fighters were killed when the strike hit three trucks loaded with munitions coming from Iraq near the Syrian border. Militia border posts were also destroyed, the war monitor said.

The group said all the dead were from the Hashed al-Shaabi, an umbrella organisation that includes KH and KSS.

However, an KH official told The Associated Press only one person was killed, while several others were wounded. He spoke on condition of anonymity because he was not authorised to speak of the attack.

The United States move came after an attack nearly two weeks ago on the main military base inside the airport in Erbil, which killed one foreign civilian contractor and wounded at least nine others, including an American soldier. 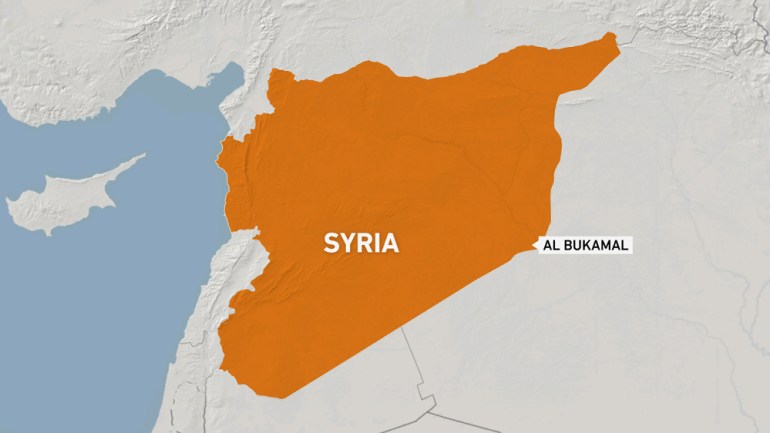 Foreign troops deployed as part of the US-led coalition that has helped Iraq fight the armed group ISIL (also known as ISIS) since 2014, are stationed at the site.

A shadowy group calling itself Awliya al-Dam – or the Guardians of the Blood – claimed responsibility for the attack and said it would continue to attack “occupation” American forces in Iraq.

The Pentagon statement described the US military response as “proportionate”, co-ordinated with diplomatic measures and carried out in consultation with coalition partners.

“We have acted in a deliberate manner that aims to de-escalate the overall situation in both eastern Syria and Iraq,” it said.

“We are confident with the target we went for. We know what we did,” said US Secretary of Defense Lloyd Austin. “We are confident that target was being used by the same Shia militia that conducted the strikes.”

Al Jazeera’s Shihab Rattansi, who is in Washington DC, said there was a clear effort to draw a distinction with Biden’s predecessor, Donald Trump.

“Clearly they are trying to draw a comparison with the previous administration of Donald Trump who in response to attacks on coalition forces in Iraq used the most disproportionate force by killing the Iranian general (Qassem) Soleimani,” Rattansi said.

Speaking from Baghdad, Al Jazeera’s Simona Foltyn said that although the US airstrikes did not target Iraq, they put “less strain on US-Iraq relations.”

“It was a significant departure from the Trump administration which regularly targeted armed groups in Iraq,” she said, highlighting a December 2019 attack which put US-Iraqi relations on a collision course and drew strong condemnation from Baghdad that Washington was not respecting its sovereignty.

Hillary Mann Leverett, CEO of political risk consultancy Stratega, said the airstrikes sent a message about the Biden administration’s loyalties in the region.

“The administration is trying to portray this first military attack as measured. Biden spoke to the Iraqi prime minister earlier this week. Importantly he spoke to the King of Saudi Arabia today.

“The rocket attacks that US administration is saying were perpetrated, were not only in Iraq. There are reports that they were in Saudi Arabia as well. The call included a determination to protect Saudi Arabia from external threats,” she added.

The Iraqi government is carrying out its own investigation into the February 15 attack in Erbil.

That attack was followed by another days later, on a base hosting US forces north of Baghdad. At least one contractor was hurt in that attack.

Rockets also hit Baghdad’s Green Zone on Monday which houses the US embassy and other diplomatic missions.

Some Western and Iraqi officials say the attacks, often claimed by little-known groups, are being carried out by militants with links to Kata’ib Hezbollah as a way for Iranian allies to harass US forces without being held accountable.