President Joe Biden’s administration is considering the cancellation of arms deals with Saudi Arabia that pose human rights concerns while limiting future military sales to “defensive” weapons, as it reassesses it relationship with the kingdom.

Four sources familiar with the administration’s thinking said that after pausing half a billion dollars in arms deals with Saudi Arabia out of concern over casualties in Yemen earlier this year, officials are assessing the equipment and training included in recent sales to determine what can be considered defensive. Those deals would be allowed.

A State Department spokesperson said, “Our focus is on ending the conflict in Yemen even as we ensure Saudi Arabia has everything it needs to defend its territory and its people,” adding Biden has pledged to end US military support for the military campaign against the Houthis.

The Biden administration is recalibrating its relationship with Saudi Arabia, a country with which it has severe human rights concerns but which is also one of Washington’s closest US allies in countering the threat posed by Iran.

“They’re trying to figure out where do you draw the lines between offensive weapons and defensive stuff,” said one congressional aide familiar with the issue, describing the process.

The Biden administration on Friday released a sensitive US intelligence report on the 2018 murder of Saudi journalist Jamal Khashoggi, a US resident who wrote for The Washington Post.

But it would end big-ticket deals – for products such as precision-guided munitions (PGM) and small-diameter bombs – like those brokered under former President Donald Trump in the face of strong objections from members of Congress.

After he lost the November 3 presidential election, Trump’s State Department kept approving weapons sales that could be considered offensive.

It cleared the sale of Boeing Co GBU-39 small diameter bombs worth some $290m to Saudi Arabia. The Trump administration also gave its blessing to the sale to Riyadh of 7500 Raytheon PGMs for nearly $480m.

The weapons review also affects $23bn of deals with the United Arab Emirates, another country that has been an important US partner.

On January 20, the day that Trump left office and Biden became president, the UAE signed agreements with the outgoing administration to buy up to 50 F-35 jets, 18 armed drones and other defence equipment in a deal worth $23bn. 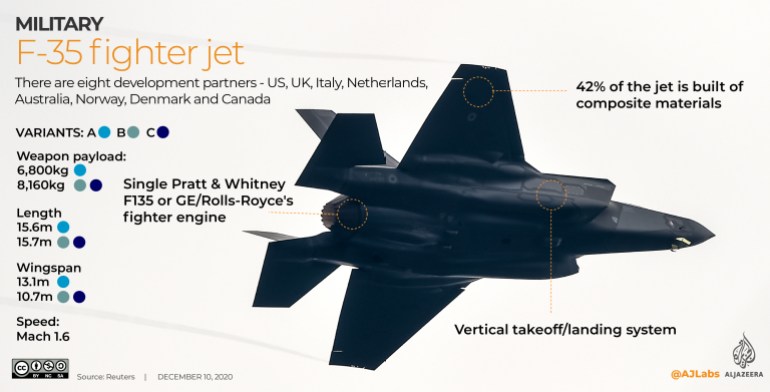 That sale, which the Trump administration justified as allowing the UAE to deter Iranian “threats,” is also being reviewed by the Biden administration.

Congress had voted to block the UAE deal out of concern that it was being rushed through without sufficient assurances that the equipment would not fall into the wrong hands, but the Republican-controlled Senate did not override his veto.

US lawmakers said they would be more comfortable with limits on offensive weapons, with many vehemently opposed to the continued massive sales of munitions that they said have contributed to the humanitarian disaster in Yemen.

“We should continue to sell military equipment to our partners in the Gulf, but we should make sure that these really are truly defensive arms,” Democratic Senator Chris Murphy said in a speech at the Council on Foreign Relations this week.

Murphy, who is chairman of the Senate Foreign Relations Committee’s Middle East subcommittee, said sales of items like armed Reaper drones to the UAE could fuel a regional arms race.

While Trump saw weapons sales as a way to create American jobs, Biden appears to revert to a stance that weighs human rights abuses more seriously than under the Trump presidency, a defence industry executive said.