Two Philippine police officers were killed and one injured in an attack with a narcotics enforcement squad, following a bungled entrapment operation outside a busy shopping mall in Metro Manila, raising more questions over the continuing deadly drug war of President Rodrigo Duterte.

The attack on Wednesday evening also injured three agents of the Philippine Drug Enforcement Agency (PDEA), although the extent of their injuries was not immediately known.

No civilians were hurt during the incident, police said, but pedestrians and mall shoppers ran for cover as the two sides exchanged fire.

A spokesman from the drug enforcement agency told reporters in Manila that several of their personnel were doing a “legitimate operation” when the gunfight erupted.

Derrick Carreon, the spokesman, was also quoted as saying that the agency’s Special Enforcement Service (SES) was involved in the operation near the mall.

It remains unclear why police officers from the nearby district station were also at the scene of the operation and ended up exchanging fire with the narcotics enforcers.

According to anti-drug operations protocol, narcotics agents are required to coordinate with the police about any impending raid.

Conflicting reports quoted the police as saying that the PDEA agents fired first, contradicting claims by drug enforcers, who blamed the police for the exchange of gunfire.

“During the buy-bust operation, the [police] personnel involved [engaged] without their knowledge [that] the people they were transacting [with] are PDEA agents,” the police report stated.

In a separate interview with Rappler news website, Carreon, the drug enforcement spokesman declined to comment on the police allegation, adding that a joint investigation would determine what transpired.

The bungled “buy-bust operation” between the PNP and the PDEA left 2 policemen dead.

He also confirmed that the police confiscated the phones and weapons of the narcotics agents for further investigation.

The police promised to investigate the case.

“The PNP and PDEA both agree and assure the public that the incident, while serious, will in no way affect the continuing operational relationship and coordination they have long firmed up in the fight against illegal drugs,” the police statement added.

A parallel investigation by the National Bureau of Investigation will also be conducted, according to Justice Secretary Menardo Guevarra.

Watch: Members of PDEA were arrested following an encounter between PDEA and QCPD members at Commonwealth Ave., Quezon City. /via @tribunephl_ana pic.twitter.com/K4cnkk5E9z

Duterte has previously claimed to have a list of rogue police officers, who are involved in the illegal drugs trade. Although the list has never been made public, several serving and former police officers have been found dead or been killed in drug enforcement operations.

Last year, the Philippine Star newspaper reported that police internal records showed that at least 50 officers were found to have used illegal drugs in 2020 compared with 35 in 2019.

The attack was the first-ever incident between police and drug enforcers during the Duterte administration which was followed by Guevarra admitting to serious shortcomings in anti-drug operations.

“In more than half of the records reviewed, the law enforcement agents involved failed to follow standard protocols pertaining to the coordination with other agencies and the processing of the crime scene,” he said in a video message to United Nations Human Rights Council’s (UNHRC) 46th regular session.

He also said that there was “no full examination” conducted on the weapon recovered from the scene of the operations.

According to the latest government report, at least 6,011 suspects have been killed across the Philippines since Duterte launched the drug war in 2016.

A June 2020 UN Human Rights Council report, however, said the “most conservative figure” at that time already put the death toll at 8,663. Human rights groups have said at least 27,000 people have died. 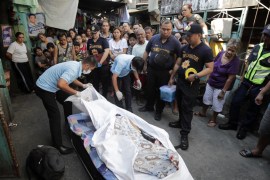 Philippine authorities ‘getting away with murder’ in drug war 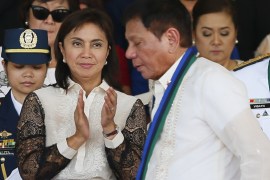 Leni Robredo said only 1 percent of the estimated supply of methamphetamine has been seized in the last three years. 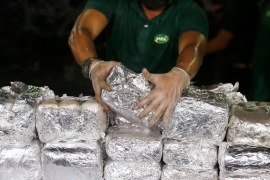