The White House coronavirus task force announced on Wednesday that it would increase the rate of vaccination across the United States, amid a decrease in COVID cases, hospitalisations and deaths.

Jeffrey Zients, the White House’s COVID-19 response coordinator, said the weekly supply of vaccines to states is now 14.5 million, up from 8.6 million five weeks ago – a 70 percent increase.

Zients said the effort will include increasing the number of people administering vaccines, including 800 federal personnel to serve as vaccinators.

“We’re mobilising teams to get shots in arms,” he said.

US President Joe Biden took office on January 20 with a pledge to vaccinate 100 million people in his first 100 days in office. Zients said that the administration is well ahead of reaching that goal.

Biden had also asked Americans to wear masks for the first 100 days of office, to help curb the spread of the virus. Many low-income Americans, Zients said, still do not have sufficient access to masks.

On Wednesday, the White House announced plans to distribute 25 million masks in community health centres, food banks and food pantries from March until May.

Zients said the plan was part of a push for “equity,” in a pandemic that has disproportionately affected people of colour and poorer Americans.

“Not all Americans are wearing masks regularly, not all have access and not all masks are equal,” he said.

He said the masks are made of cloth and reusable, in both adult and children’s sizes. The White House said an estimated 12 to 15 million Americans will receive masks.

On the heels of Zients’ mask announcement, Vice President Kamala Harris addressed the inequity of vaccinations, as Black and Latino Americans are receiving shots at lower rates than white Americans.

“Let’s not let COVID get us. Let’s get the vaccine instead, right?” Harris said in an interview with MSNBC. “Let’s not let this thing get us.”

“We know black people are disproportionately likely to contract the virus and die from it,” Harris continued. “We know when you look at who the frontline workers are, who is the most at risk disproportionately, we are talking about people of color.”

Zients also announced that they are ready to roll out the Johnson & Johnson vaccine next week if it receives a pending emergency authorisation from the Food and Drug Administration (FDA).

“We want the American people to know that we’re doing the work,” Zients said, “so that if the EUA [Emergency Use Authorisation] is granted, we will waste no time getting this life-saving vaccine into the arms of Americans.”

Rochelle Walensky, director of the Centers for Disease Control and Prevention (CDC), said the ramped-up vaccination campaign is taking place amid a continued decline nationwide in new infections, hospital admissions and deaths.

She said new COVID-19 cases had declined by 25 percent from last week, and deaths – at a rate of fewer than 2,000 per day – had decline by 35 percent from the previous week. Hospital admissions were also down by 16 percent from a week prior, she said.

“We continue to see trends heading in the right direction,” Walensky said during the news conference on Wednesday. “While this is good news,” she added, “cases still remain high.”

Deaths due to the coronavirus surged past 500,000 on Monday, more than any other country in the world. That evening, the White House held a candlelight vigil in Washington, DC, to honour the lives lost.

On Wednesday the FDA announced that the J&J coronavirus vaccine is safe and effective in preventing severe cases and deaths. Unlike the Pfizer and Moderna vaccines currently being administered in the US, the J&J vaccine only requires a single dose. It also does not require storage in freezing conditions.

The FDA announcement paves the way for the vaccine to be authorised later this week. 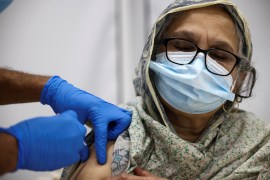 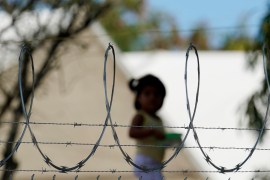 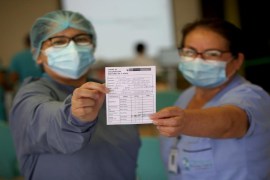