Ghana security forces raided and shut down the office of an LGBTQ rights group in the capital, Accra, the organisation has said, after politicians and religious leaders called for its closure.

Gay sex is a criminal offence in the West African country and members of the LGBTQ community face widespread discrimination.

“This morning, our office was raided by National Security,” the LGBT+ Rights Ghana group said on Twitter on Wednesday.

“At this moment, we no longer have access to our safe space and our safety is being threatened,” it said, adding that “a few days ago, traditional leaders threatened to burn down our office but the police did not help”.

Foreign diplomats in the country came under fire after some attended the opening of the centre on January 31.

The European Union’s delegation in Ghana tweeted at the time that representatives had “participated in the opening of the new community space”.

This morning, our office was raided by National Security. A few days ago, traditional leaders threatened to burn down our office but the police did not help. pic.twitter.com/FM2XVXDnJL

The LGBTQ group’s director, Alex Donkor, told the AFP news agency that closing the centre was against human rights.

“Ghana is a free country and we expect the president and the security agencies to rather protect us instead of threatening us,” Donkor said.

There was no immediate statement by the police.

But the owner of the property, Asenso Gyambi, said he had reported the group to security agencies.

Gyambi told AFP he was not aware his house was being rented by LGBT+ Rights Ghana.

“I wasn’t happy about it … I had to report it to the security agencies to take action. I won’t tolerate such activities in my property.”

Ghana’s minister-designate for gender, children and social protection, Sarah Adwoa Safo, said last week that “the issue of the criminality of LGBT is non-negotiable and our cultural practices also frown on it”.

There is no legislation in Ghana explicitly prohibiting homosexuality, but gay sex is criminalised, with offenders potentially facing up to 25 years in prison. 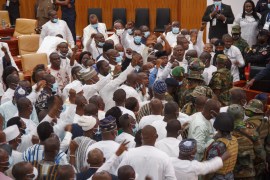 Chaotic scenes erupted after the ruling party deputy tried to seize the ballot box during vote for parliament speaker. 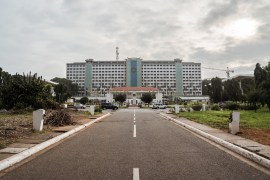 Ghana Parliament shuts down over COVID outbreak among MPs, staff

At least 17 members of parliament and 151 support staff infected with the coronavirus. 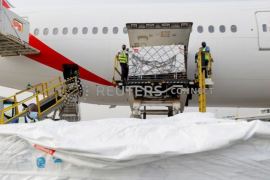 At least 600,000 doses of AstraZeneca vaccine arrive in Accra as part of efforts for equitable global access to jabs.