British Prime Minister Boris Johnson has set out a four-step plan to ease coronavirus restrictions in England, expressing a hope that life could get back to normal by the end of June.

Johnson outlined a “gradual and cautious” approach to lifting curbs in England, starting with the return of pupils to schools from March 8.

Non-essential retail and hairdressers will reopen April 12. So will pubs and restaurants, though only outdoors. Indoor venues such as theatres and cinemas, and indoor seating in bars and restaurants, are scheduled to open May 17, when limited crowds will be able to return to sports stadiums. It is also the earliest date Britons may be allowed foreign holidays.

The government is aiming for the lifting of all limits on social contact from June 21. The government says the dates could all be postponed if infections rise.

The measures announced apply to England. Scotland, Wales and Northern Ireland all have slightly different lockdowns in place, with some children returning to class in Scotland and Wales on Monday.

Johnson said there was no credible route to eliminating COVID-19 from the world and so lockdown restrictions would be cautiously lifted in England as they cannot be maintained indefinitely.

“There is therefore no credible route to a zero COVID Britain or indeed a zero COVID world,” he told Parliament as he outlined the plan to exit restrictions.

“And we cannot persist indefinitely with restrictions that debilitate our economy, our physical and mental wellbeing, and the life chances of our children.”

“And that is why it is so crucial that this road map is cautious but also irreversible,” he added. “We’re setting out on what I hope and believe is a one-way road to freedom.”

Gov’t will ‘protect jobs and livelihoods’

Britain has had Europe’s deadliest coronavirus outbreak, with more than 120,000 deaths. Faced with a dominant virus variant that scientists say is more transmissible and deadlier than the original virus, the country has spent much of the winter under a tight lockdown.

Hopes for a return to normality rest largely on Britain’s fast-moving inoculation programme that has given more than 17.5 million people, a third of the country’s adult population, the first of two doses of vaccine. The aim is to give every adult a shot of vaccine by July 31, and to protect the above 50s and the medically vulnerable by getting them a first vaccine jab by April 15.

Two studies released on Monday showed that vaccination programmes are contributing to a sharp drop in hospitalisations, boosting hopes that the shots will work as well in the real world as they have in carefully controlled studies.

In England, preliminary data from a study of health care workers showed that the Pfizer vaccine reduced the risk of catching COVID-19 by 70 percent after one dose, a figure that rose to 85 percent after the second.

“This new evidence shows that the jab protects you, and protects those around you,’’ Health Secretary Matt Hancock said. “It is important that we see as much evidence as possible on the vaccine’s impact on protection and on transmission and we will continue to publish evidence as we gather it.’’

Johnson’s Conservative government was accused of reopening the country too quickly after the first lockdown last year and of rejecting scientific advice before a short “circuit-breaker” lockdown in the autumn season.

Johnson said his government would not abandon those who need support from the state during the COVID-19 pandemic.

“I want to reassure the house [Parliament], we will not pull the rug out. For the duration of the pandemic the government will continue to do whatever it takes to protect jobs and livelihoods across the UK,” Johnson told Parliament.

The Conservative government – in normal times an opponent of lavish public spending – spent 280 billion pounds ($393bn) in 2020 to deal with the pandemic, including billions paying the salaries of almost 10 million furloughed workers. 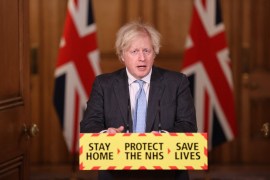 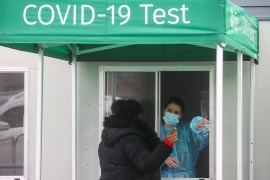 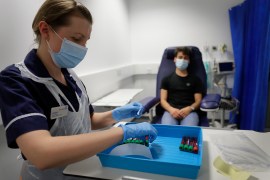 As part of a government-backed ‘human challenge’ study, up to 90 young people will be exposed to the coronavirus.