A British World War II veteran who raised millions of pounds for health service workers on the front line of the battle against COVID-19 has died aged 100, his family has said.

Captain Sir Tom Moore – popularly known as Captain Tom – passed away on Tuesday morning at Bedford Hospital. He had tested positive for COVID-19 on January 22 and was fighting pneumonia.

Over the last five years, Moore had been receiving treatment for prostate and skin cancer, his family said. He had not been vaccinated against COVID-19 due to the other medication he was taking.

“It is with great sadness that we announce the death of our dear father, Captain Sir Tom Moore,” his daughters said in a statement.

Moore struck a chord with locked-down Britain by walking around his garden with the help of a walking frame to raise 38.9 million pounds ($53 million) for the National Health Service.

His endeavour spread joy amid the grim news of the coronavirus outbreak.

“The last year of our father’s life was nothing short of remarkable. He was rejuvenated and experienced things he’d only ever dreamed of,” his daughters said.

“Whilst he’d been in so many hearts for just a short time, he was an incredible father and grandfather, and he will stay alive in our hearts forever.”

Moore, who rose to the rank of captain while serving in India and Myanmar during World War II, was knighted by Queen Elizabeth II in July for his fundraising efforts.

His hospitalisation late last month prompted an outpouring of support.

Tributes poured in upon hearing of Moore’s death, including from UK Prime Minister Boris Johnson, who said the former military veteran was a “hero in the truest sense of the word”.

“He became not just a national inspiration but a beacon of hope for the world,” Johnson said in a tweet.

Buckingham Palace said in a tweet the queen would be sending a private message to his family.

“Her Majesty very much enjoyed meeting Captain Sir Tom and his family at Windsor last year. Her thoughts and those of the Royal Family are with them.”

The Queen is sending a private message of condolence to the family of Captain Sir Tom Moore.

Her Majesty very much enjoyed meeting Captain Sir Tom and his family at Windsor last year. Her thoughts and those of the Royal Family are with them. pic.twitter.com/nl1krvoUlW 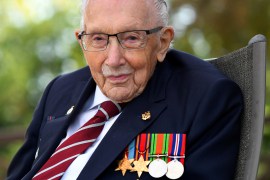 Tom Moore raised more than $41m for the health service by walking laps of his garden during last year’s lockdown. 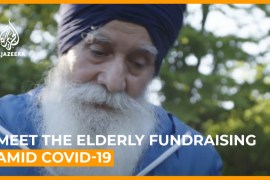 Meet the elderly fundraising amid coronavirus

Meet the elderly people in UK and Russia fundraising to help those affected by the coronavirus pandemic. 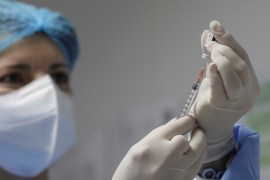 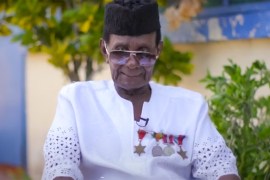 WWII veteran Joseph Hammond logs 14 miles in a week as part of a fundraiser to support Africa’s front-line workers.