A Chinese survey ship, which entered Philippine waters for the second time over the past year without authorisation, has left the country, but observers are increasingly alarmed over the intrusions, amid confusing statements on why it was in the country’s seas.

He said that his department only approved a “request for shelter” from the Chinese embassy due to “bad weather”.

Officials from different Philippine agencies, however, gave conflicting accounts of when the ship entered the country’s territory.

According to Philippine Coast Guard spokesperson Commodore Armand Balilo, the Chinese ship left the Philippines before noon on Monday, after entering the country on Friday, January 29. He added that the ship’s captain “refused to allow” Filipino coast guard personnel to board the ship, citing COVID health restrictions.

In response to a follow-up question by Al Jazeera, Locsin said that the emergency request by the Chinese embassy was sent on Saturday, January 30, “before any report of intrusion”.

A subsequent statement by the Philippine department of foreign affairs’ maritime division, however, said the ship entered the country’s Exclusive Economic Zone (EEZ) as early as Wednesday, January 27.

The following day, Thursday, the Chinese embassy “phoned in request” to allow the ship “to take wind shelter” within Philippine territory, followed by a “note verbale” reiterating the request on Friday, the statement added.

According to the Manila-based newspaper, Philippine Daily Inquirer, the ship had already been spotted within the Philippine EEZ on January 25.

There were no typhoons reported in the Philippines in recent weeks, but January brings rough seas in the eastern front facing the Pacific.

The intrusions also come as China began what it said was a research expedition to the resource-rich Benham Rise, northeast of the Philippines and within its EEZ. Beijing had previously aroused anger by saying that Manila cannot claim sovereignty over the area, despite a United Nations declaration that it is part of the Philippines.

Those who have criticised the Chinese expeditions into Pacific waters warn that the Philippines may be giving away too much to Beijing by allowing such activities, as ties between the two countries grow closer under the administration of President Rodrigo Duterte.

In September 2020, the Jia Geng was also spotted entering Philippine territory without permission, prompting Manila to file a diplomatic protest with Beijing.

After Philippine authorities confronted the ship about their presence in the northern Calayan island, the Jia Geng, which is operated by the state-owned Xiamen University, said it had encountered inclement weather.

In a statement to Al Jazeera, opposition Senator Risa Hontiveros criticised the refusal of the Jia Geng’s crew to submit to a search by Philippine authorities saying it is “a violation of our rights” under international law.

“Inside our territorial sea, we have an unambiguous right to board and inspect. If we are talking about COVID-19 protocols, our law applies, not China’s.”

Former Senator Antonio Trillanes, who had served as a lieutenant in the Philippine Navy and also acted as a special intermediary with China, said the Philippine Coast Guard “should have immediately apprehended” the Chinese ship.

“The fact that it didn’t apprehend the Chinese vessel shows the deferential treatment of our own Philippine Coast Guard towards China. This is yet another manifestation of Duterte’s policy of subservience to Beijing.”

In a social media post, Jay Batongbacal, a University of the Philippines maritime expert, also pointed out that since the ship was anchored within Philippine waters, it should have been subjected to the jurisdiction of the country’s coastguard.

But he also pointed out that since the ship is owned by a state university, it might have also claimed sovereign immunity.

“So the question arises, what is the status of the vessel? If it is indeed entitled to sovereign immunity as a Chinese government vessel, why was diplomatic clearance not sought earlier,” he asked.

The Chinese research vessel "Jiageng" is back operating in the Philippines exclusive economic zone. Current location about 130 nautical miles east of Samar. pic.twitter.com/lhvC0RlyrI

“Why did they do so only when the vessel was noticed to be already inside and anchored” in Philippine territorial waters,” he added.

“Seeking refuge is fine, but if the vessel is a foreign government ship, then there should be no obstacle to simple diplomatic courtesy.”

In a statement, the Chinese embassy in Manila denied the reports of the intrusion, saying the news was being sensationalised.

“The fact is that the Chinese scientific survey ship is seeking humanitarian shelter in Philippine waters due to unfavourable weather and sea conditions in the Pacific, where they are scheduled to conduct a research mission,” it said.

“Malicious hype-up and irresponsible and baseless accusations that run counter to common sense, are not acceptable and should not be appeased in a society that believes in rule of law and international norms as well as mutual respect.”

Oceanographic surveys are legal under international law. But there is scepticism about the activities being carried out by China’s research ships amid concern the data gathered could be provided to China’s navy – one of the most powerful in the world.

Recently, China also angered its neighbours by passing a law that for the first time explicitly allows its coastguard to fire on foreign vessels.

The Coast Guard Law passed in late January empowers it to “take all necessary measures, including the use of weapons when national sovereignty, sovereign rights, and jurisdiction are being illegally infringed upon by foreign organisations or individuals at sea”. 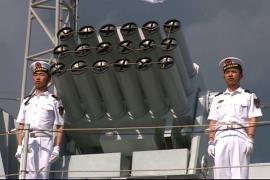 The Philippine military said that China had sent a ship to an area known as Benham Rise, off the eastern coast of the Philippines. The underwater region has untapped resources and officials want to ensure it stays under their control. 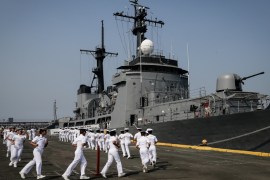 Chinese ‘survey ships’ were recently sighted in the 13-million hectare area the UN says belongs to the Philippines. 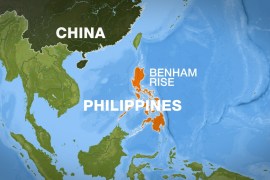