US President Joe Biden on Monday threatened to reimpose sanctions on Myanmar following a coup by the country’s military leaders and called for a concerted international response to push them into relinquishing power.

Biden condemned the military’s takeover from the civilian-led government on Monday and its detention of the country’s elected leader Aung San Suu Kyi as “a direct assault on the country’s transition to democracy and the rule of law”.

The coup also brought rare policy alignment between Biden’s Democrats and top Republicans as they denounced the military takeover and called for consequences.

“The international community should come together in one voice to press the Burmese military to immediately relinquish the power they have seized, release the activists and officials they have detained,” Biden said in a statement.

“The United States removed sanctions on Burma over the past decade based on progress toward democracy. The reversal of that progress will necessitate an immediate review of our sanction laws and authorities, followed by appropriate action,” he said.

Biden warned the US was “taking note of those who stand with the people of Burma in this difficult hour.”

“We will work with our partners throughout the region and the world to support the restoration of democracy and the rule of law, as well as to hold accountable those responsible for overturning Burma’s democratic transition,” he said.

A US official later told the Reuters news agency the administration had launched high-level internal discussions aimed at crafting a “whole of government” response and planned to consult closely with Congress.

Greg Poling and Simon Hudes at Washington’s Center for Strategic and International Studies said there would almost certainly be new sanctions against those involved in the coup.

“But that is unlikely to have much immediate impact on the generals,” they said, given that few of them had any intention of travelling to or doing business in the US.

Also, unlike its reaction to a 2014 coup in Thailand, the US cannot pull back on military exercises, training, and sales, because military-to-military relations with Myanmar are almost non-existent, they said.

Former President Barack Obama started easing sanctions on Myanmar in 2011 after the military began loosening its grip, and in 2016 lifted many remaining restrictions. In 2019, the Trump administration imposed targeted sanctions on four military commanders, including coup leader General Min Aung Hlaing, over allegations of abuses against Rohingya Muslims and other minorities.

Human rights groups said the international community needed to recognise the shortcomings of their engagement during Myanmar’s democratic transition and take tougher steps to rein in the military.

“The Tatmadaw has exposed the vast vulnerabilities of Myanmar’s democratic institutions by staging this brazen coup,” Akila Radhakrishnan, the president of the Global Justice Center.

“Given the history of military rule, the risk of ensuing violence and atrocities is greater than any moment in recent memory. We can’t ignore the repeated failure of the international community to take concerted action to curb military power and hold it accountable for its constant human rights abuses, including its genocidal campaign against the Rohingya.”

As the country’s leader, Aung San Suu Kyi defended her nation at the International Court of Justice in The Hague on 2019 against charges of genocide in the treatment of the mostly Muslim Rohingya after at least 740,000 fled the western state of Rakhine in the wake of a brutal military crackdown in 2017.

Monitors say the armed forces continue to commit abuses in Rakhine and in other ethnic minority areas of the country.

The Network for Human Rights Documentation – Burma (ND-Burma) said an emergency meeting at the United Nations Security Council had to be convened, with a delegation to be sent to Myanmar.

“Members must address the current situation in Myanmar with greater force and effectiveness than they have in the past,” ND-Burma said in a statement.

The 15-member Security Council plans to discuss Myanmar in a closed meeting on Tuesday, according to diplomats.

“We want to address the long-term threats to peace and security, of course working closely with Myanmar’s Asia and ASEAN neighbours,” Britain’s UN Ambassador Barbara Woodward, president of the council for February, told reporters.

Wai Wai Nu, Founder and Director of the Women’s Peace Network and a Rohingya activist, said on Tuesday civil society wanted a “bolder” international response to the coup including the referral to the ICC, immediate sanctions on the military and its businesses, and a global arms embargo on the country.

Key to any action will be the response of China and Russia, which as permanent members have a veto in the council. In 2017, their support protected Myanmar from any significant move in response to the Rohingya crackdown.

“It’s our hope that any move of the Council would be conducive to the stability of Myanmar rather than making the situation more complicated,” a spokesperson for China’s UN mission said.

Aung San Suu Kyi’s National League for Democracy party won a landslide victory in the country’s November 8 election but the army, which is guaranteed a quarter of the seats in parliament and also has a proxy party cried foul.

It claimed on Monday that its takeover was a response to election fraud, although there has been no evidence of wrong-doing, and that its actions were justified under the 2008 constitution that was written by the armed forces.

“For years, world leaders praised a ‘democratic’ transition and constitution that gave the military the very power they used to stage today’s coup,” Global Justice Center’s Radhakrishnan added. “Now, we’re seeing the consequences of an international order that blinds itself to reality in the interest of ‘progress’ and economic investment instead of protecting human rights.”

White House spokeswoman Jen Psaki told a regular news briefing Washington had had “intensive” conversations with allies. She declined to say what other actions were under consideration aside from sanctions.

Psaki said Biden’s remark that the US was “taking note” of how other countries respond was “a message to all countries in the region.”

The top Democrat on the Senate Foreign Relations Committee, Robert Menendez, said Washington and other countries “should impose strict economic sanctions, as well as other measures” against Myanmar’s army and the military leadership if they did not free the country’s elected leaders and remove themselves from government.

He also charged that the Myanmar army was guilty of “genocide” against minority Rohingya Muslims – a determination yet to be stated by the US government – and of a sustained campaign of violence against other minorities.

US Senate Republican leader Mitch McConnell, who like members of the Biden administration has had close past ties with Suu Kyi, called the arrests “horrifying” and said Washington needed to “impose costs” on those behind the coup.

“The Biden Administration must take a strong stand and our partners and all democracies around the world should follow suit in condemning this authoritarian assault on democracy,” he said.

The events in Myanmar are a significant challenge for the Biden administration and its effort to forge a robust Asia Pacific policy to stand up to China.

Many of Biden’s Asia policy team, including its head, Kurt Campbell, are veterans of the Obama administration, which on leaving office in 2016 hailed its work to end decades of military rule in Myanmar as a major foreign policy achievement. Biden was then Obama’s vice president. 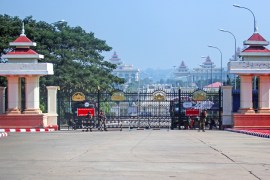 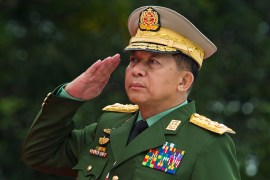 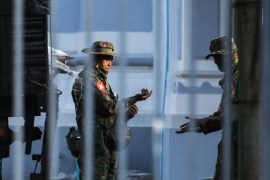 Panic, anger and uncertainty in Yangon after Myanmar coup

Military takeover comes hours before parliament was due to convene for its first session since the NLD swept elections. 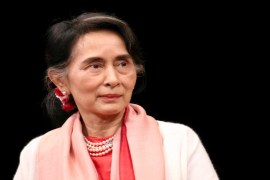 Can Myanmar return to democracy?