On February 18, NASA’s Mars 2020 Perseverance Rover touched down on the Red Planet. The mission, which was launched seven months ago, had been travelling for nearly half a billion kilometres at more than fifteen times the speed of a bullet.

Equipped with 19 cameras and two microphones, the mission was streamed on NASA’s YouTube page and was watched by millions of people from all over the world.

Perseverance is one of three separate missions arriving at Mars this month. On February 9, the United Arab Emirates became the first Arab country to send a probe around Mars to study its atmosphere. The next day, China’s Tianwen-1 mission completed its first successful journey to another planet in our solar system. The orbiter will spend a few months analysing the surface of the planet before deploying the first non-American rover on Mars, which is scheduled for May or June 2021.

The reason why these missions are back-to-back has to do with orbit trajectories. Every two years, the orbits of Mars and Earth come closer together, giving scientists a launch window that minimises cost, time and energy.

Humans have attempted to reach Mars since the 1960s. Since then, at least nine nations have attempted 49 missions to Mars which include orbiters (fly around the planet), landers (remain stationary on the Martian surface) and rovers (move around the surface). 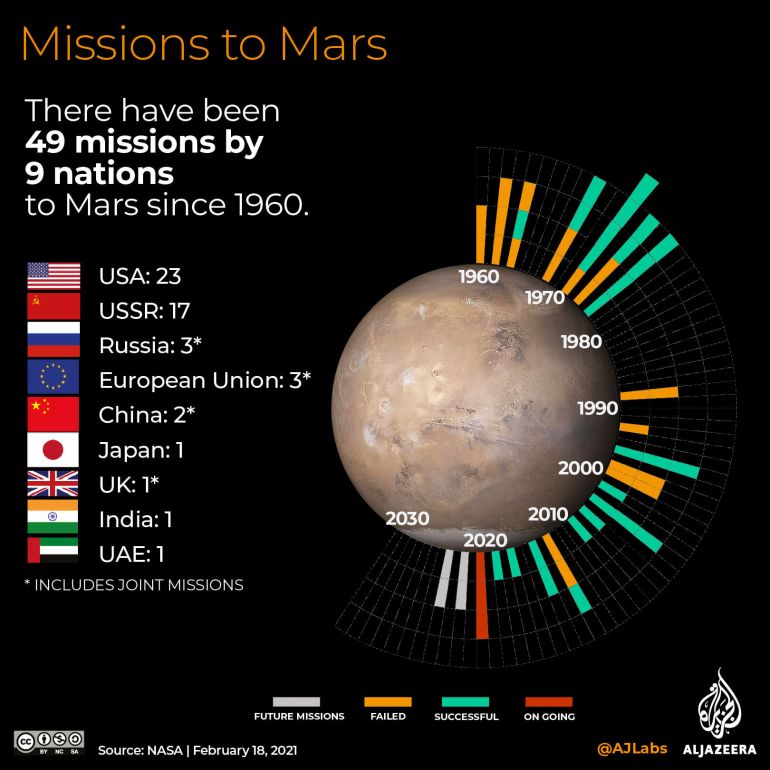 How far away is Mars?

Space is filled with a lot of emptiness. Just how much? In 2014, an image posted online showed that all the planets in the solar system can fit in the distance between the Earth and the Moon. To put that in perspective, right now, Mars is more than 500 times farther than that. 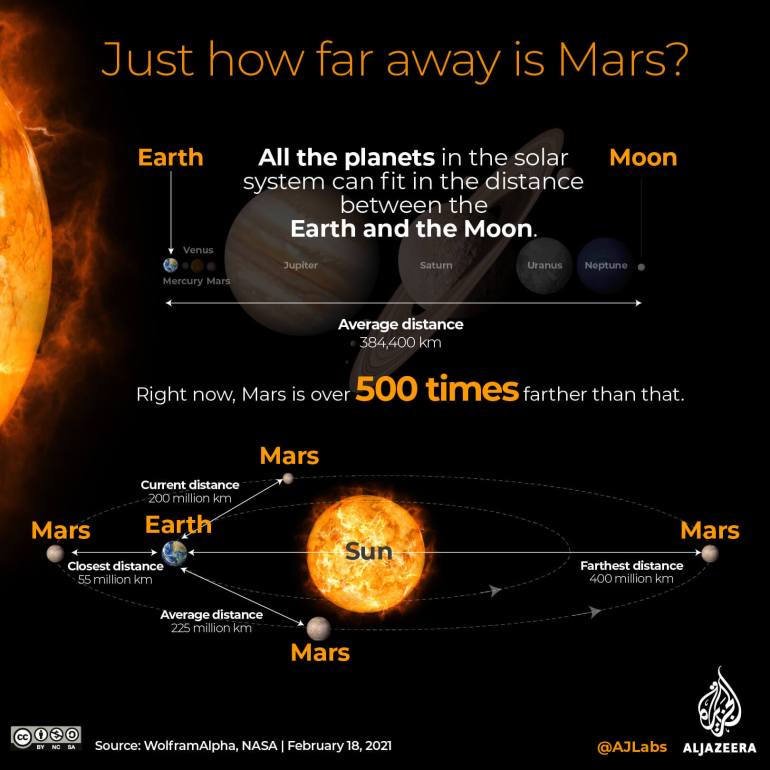 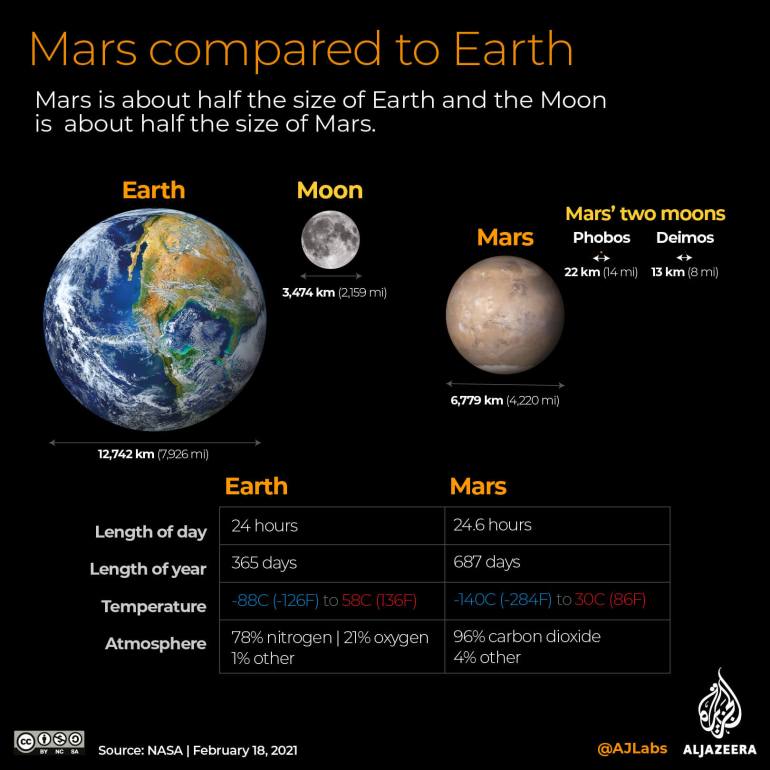 Your body on Mars

To have humans living on Mars has been the dream of many space explorers for years. The reality is that unless Mars’ atmosphere and radiation levels are drastically transformed, surviving on Mars is beyond the capacity of the human body. On the bright side, you would be nearly half your age and less than half your weight if you managed to get there. Your mass and Earth age would remain the same, however. 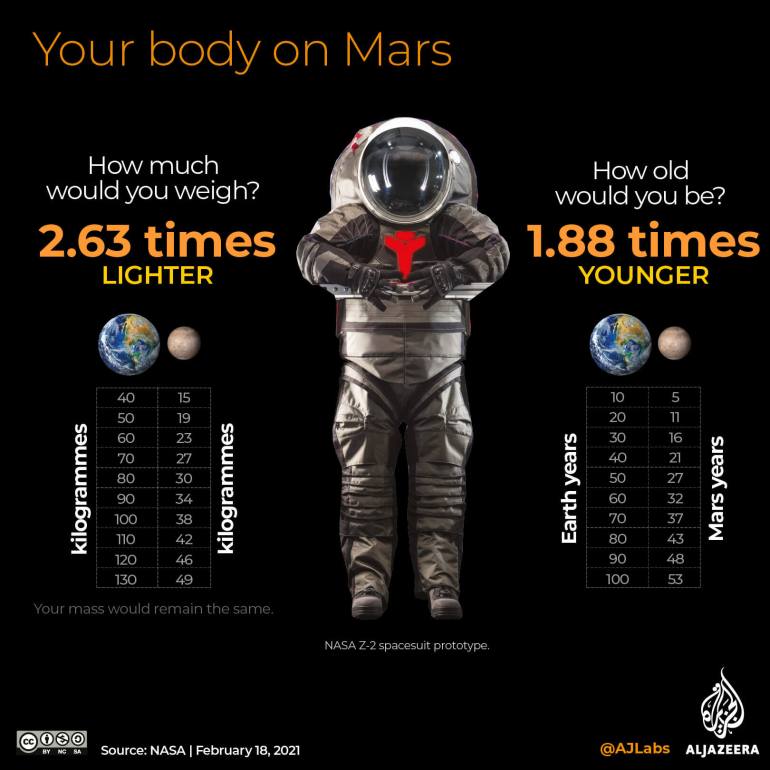 Where are the Mars rovers

NASA currently has five rovers on the surface of Mars. Each was specifically placed to study certain characteristics of the planet. The only active rover right now besides Perseverance is Curiosity, which was deployed in 2012. It is roughly 3,700 km (2,300 miles) away from Perseverance’s landing site in Jezero Crater. To put the landing sites in perspective, here is where the five rovers would be if you could magically shrink down the Earth to fit on Mars.

If you ever wondered how big your continent would be compared with Mars, take a look at the map below. Almost 70 percent of the Earth is covered with water. If you removed that area, Earth and Mars would have roughly equal surface areas. 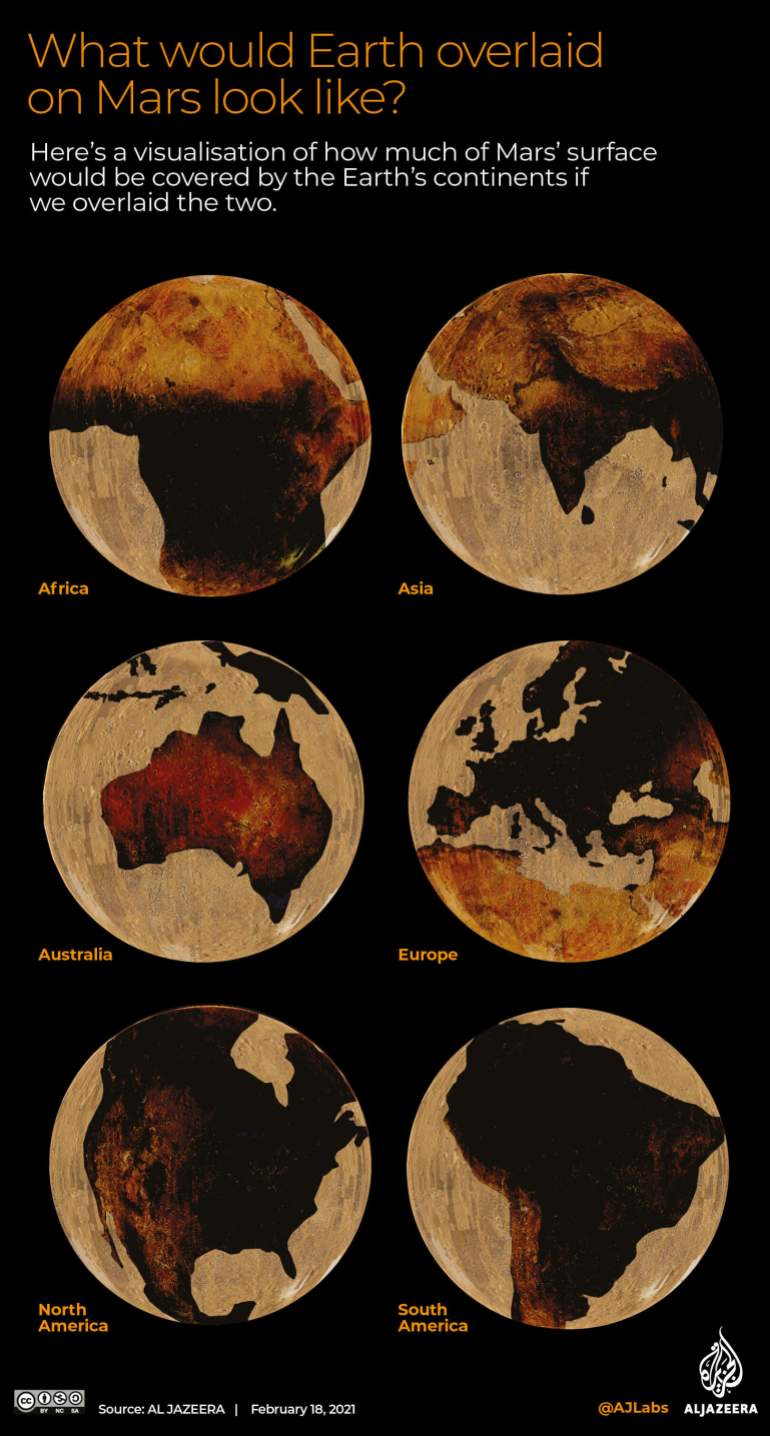