By
Ney Alvarez and
Jihan Abdalla

Human rights defenders in Puerto Rico have welcomed a recent declaration of a state of emergency over gender violence on the island as a step in the right direction, but cautioned that real change can only come after a meaningful shift on the societal level.

Gender activists have for years been calling for the designation, but the year 2020 brought on an increased sense of urgency: the US territory had 60 femicides – a 62 percent increase over the year before, according to the Observatory for Gender Equity, a local watchdog.

On January 24, the island’s governor Pedro Pierluisi issued an executive order declaring a state of emergency for 18 months, in a move that directs resources to government agencies to combat violence directed at women and girls and members of the LGBTQ community.

The order also includes the appointment of a new government representative to oversee the implementation of the measure, and the launching of a phone app to report emergency situations and report aggressive people. It also includes a public awareness campaign about gender violence.

“It’s been too long, this pattern of male chauvinism-related violence, femicides, homophobic and transphobic violence,” Pierluisi said during an interview with ABC News on February 5. “We want to promote diversity, respect each other,” he said.

David Cordero, an investigative journalist for Puerto Rico’s el Nuevo Dia newspaper said much of the problem has to do with insufficient police training and institutionalised misogyny in policing.

Puerto Rico has had a hate crime law in place since 2002, which includes both sexual orientation and gender identity, but Cordero says police have not been applying it correctly.

“Most of these cases are connected to the fact that the police department, from the very beginning, didn’t investigate these cases as hate crimes,” Cordero told Al Jazeera’s The Take podcast, citing examples of police frequently misidentifying trans victims’ genders.

“They [the police] are not applying the right protocols from the very beginning that they arrive at the scene, they are not identifying the person as transgender,” he said.

On February 23, 2020, a shocking murder further highlighted the dangers that transgender people face, and the sense of impunity that attackers have when committing such crimes. It also sparked widespread outrage.

Alexa Negron Luciano, who was transgender and homeless, went to use a women’s toilet in a fast food restaurant in Toa Baja, Puerto Rico. A customer called the police, saying that Negron Luciano was peeping in the stalls.

After the police arrived, someone at the restaurant snapped photos of Negron Luciano being questioned by a police officer, and posted them on social media. The post went viral with what activists said had highly offensive homophobic and transphobic comments. That night, she was shot to death reportedly by a group of men who filmed her death as laughter could be heard.  Police believe the video was also posted on social media.

Negron Luciano’s case gained public attention after Puerto Rican rapper Bad Bunny appeared on the US TV talk programme, The Tonight Show Starring Jimmy Fallon a few days later, dressed in a long skirt and a pink jacket, which he took off to reveal a white shirt that read in Spanish, “They killed Alexa, not a man in a skirt.”

“She did nothing, she just went to the bathroom, she was hunted and then killed,” Pedro Luis Serrano, the founder of Puerto Rico Para Tod@s (Puerto Rico for Everyone), told The Take.

“This [killing] was a trophy to these transphobic horrible people, and then nothing was done in her case.”

Serrano says Negron Luciano’s killing highlighted the deeply seeded misogyny in society, one that could take years to rectify.

“I think it’s horrible, it tells a lot about our society and where we’re at,” Serrano said, adding that much more will need to be done in school curriculums to alter the mindset that permits acts of violence against women and transgender people.

“It takes all of us to change attitudes, perspectives and the education system to be inclusive of sexual orientation and gender identity,” he said. “It starts with schools and the upbringing.”

Offering some hope that policing efforts may be shifting, in May police charged two men under the federal hate crimes law for allegedly killing two trans women, Serena Angelique Velazquez and Layla Pelaez in April before setting their car on fire.

In January, Samuel Edmund Damian Valentin, a transgender man whose body was found on a highway outside of the capital San Juan, after being hit by a car, became at least the seventh trans person killed in Puerto Rico in a year. He had been shot several times. Police initially misidentified Damian as a woman.

Ivana Fred Millan, a Puerto Rican transgender activist, said she welcomes the governor’s initiative, which marked a meaningful change in the legal realm. But the challenge now remains to make a significant difference on the ground.

“I hope that this executive order, which is a new initiative by the governor, doesn’t remain on paper,” Millan told The Take, “that what is written can be implemented into work – that would be the most important.” 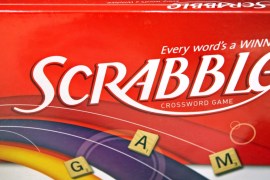 US Scrabble bans racist and LGBTQ slurs from tournaments 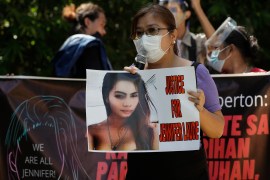 Allowing the use of the ‘panic defence’ in court enables impunity for murderers of LGBTQ people. 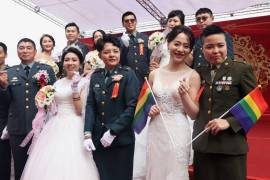