US President Joe Biden’s administration will begin the work of renewing the United States’s relationships with its European allies when NATO defence ministers participate in meetings this week.

The two-day meeting, to be held via teleconference on Wednesday and Thursday, is expected to set a more cooperative tone in transatlantic relations as Biden’s Defense Secretary Lloyd Austin makes his debut.

Biden also will deliver remarks to the annual Munich Security Conference at the end of the week.

“You have such a huge difference between Donald Trump and Joe Biden in their attitudes towards Europe,” said James Goldgeier, a professor of international relations at American University in Washington, DC.

“It makes a big difference that we now have a president who is committed to transatlantic relations,” Goldgeier told Al Jazeera, adding that Biden has been “steeped in these issues for decades so that’s a relief for the Europeans”.

A greater emphasis on working with allies will be a shift from the more confrontational approach of the previous Trump administration.

Trump had repeatedly confronted NATO nations with demands they spend more on defence and further irritated European leaders by repeatedly making unilateral decisions and expecting US allies to agree to them.

“Trump was the most anti-European president of the post-World War II era. He viewed allies as harmful,” Goldgeier said.

Discussions during the NATO defence ministerial meeting are expected to revolve around a set of proposals put forward by a NATO 2030 study group calling for the alliance to adapt to changing security conditions.

Countering Russia remains NATO’s primary challenge but the rising influence of China, including its purchase of the Greek port of Piraeus, is a new concern. The global coronavirus pandemic and climate change are also on the agenda.

The meeting this week “will build to some sort of leaders’ meeting, which hopefully Biden can attend in person, sometime in the summer”, said Rachel Ellehuus, the deputy director of the Europe, Russia and Eurasia Program at the Center for Strategic and International Studies, a US-based think-tank.

A key early test of US relations within the alliance will come in defence ministers’ deliberations on Afghanistan on Thursday, Ellehuus said.

The Biden administration is reviewing a peace agreement between the Afghan government and the Taliban – in negotiations encouraged by the Trump administration – that calls for a withdrawal of all foreign troops in Afghanistan by May 1.

Lately, the Taliban has been ramping up attacks on civilian targets, leading Biden officials and NATO Secretary-General Jens Stoltenberg to condemn the level of violence in Afghanistan as “unacceptable”.

In a press conference on Monday, Stoltenberg suggested the timeline for a withdrawal of NATO’s 10,000 troops in Afghanistan would shift.

The alliance will not withdraw “before the time is right”, Stoltenberg said. He also emphasised NATO has committed to providing funding and training support for Afghan government security forces through to 2024.

Pentagon spokesman John Kirby said at a press conference on February 12 that Biden had made no decisions on troop levels in Afghanistan. Austin would use the consultations with his NATO counterparts to help formulate any recommendations to Biden, Kirby said.

“Nothing has changed about the fact that we continue to review the status of the agreement and the degree of compliance by parties and no decisions have been made on force structure,” Kirby told reporters at the Pentagon.

NATO’s training mission in Iraq will also be discussed during the meetings this week, Stoltenberg said on Monday.

“I expect ministers will agree to launch an expanded mission, with more allied personnel training and advising in more security institutions across the country. The mission will expand gradually, in response to the situation,” he said. 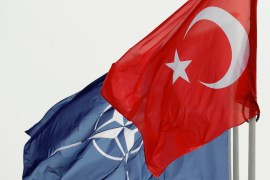 What do US sanctions on Turkey mean for NATO?

US sanctions on Turkey for its purchase of Russia’s S-400 missile defence system could threaten the alliance. 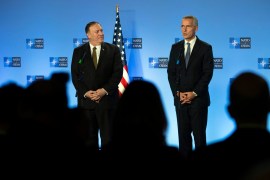 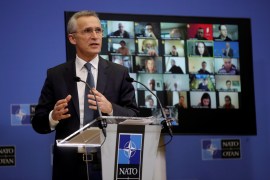