Rights groups, activists and academic institutions have condemned Philippine authorities following a raid targeting Indigenous Lumad students who sought shelter at a Catholic university after being forced from their homes because of fighting between the military and communist rebels.

Monday’s roundup, which the government insisted was a “rescue operation”, is seen as part of President Rodrigo Duterte’s new war against the communists, who have been waging an armed rebellion for half a century.

The Duterte administration recently declared the communists a “terrorist” organisation, after talks with the group collapsed. Since then, it has also accused mainstream left-leaning political parties, workers groups and even academics of acting as “fronts” for the communist rebels – a government campaign that has become known as “red-tagging”. Critics accuse the president of using “communism” as an excuse to crack down on any groups who oppose his administration’s policies.

During the raid on Monday, at least 21 Lumad students, 19 of them minors, were taken by police from the University of San Carlos in Cebu City, while seven others, including teachers and Lumad elders, were arrested without warrant and accused of kidnapping.

Among those who were detained was Chad Booc, a University of the Philippines graduate and volunteer teacher. Booc, who Al Jazeera previously interviewed for his advocacy for Indigenous students, also campaigned against the anti-terror law, which was passed in 2020 and allowed for longer detention without charge as well as extended surveillance.

This is what the PNP's 'rescue operation' looks like. Manhandling, handcuffing and mauling those they claim they are rescuing, the Lumad.#StandWithBakwitSchool#FreeLumad25 pic.twitter.com/dmbT5R8kje

Images posted on social media showed the students and teachers screaming as police and social workers dragged them from the university grounds.

The Catholic university has provided shelter and makeshift education facilities to the Lumad students since March last year after they fled their homes in the southern island of Mindanao due to armed conflict.

According to the Save Our Schools Network, which advocates for the education of the Lumad children, at least 176 of their schools in Mindanao have been shut down by the government, depriving at least 5,500 Indigenous children of education.

The government has long claimed that the educational facilities for Indigenous students are being used as recruitment grounds for the rebels.

In a press conference on Monday, Police Brigadier General Ronnie Montejo said that the children were reportedly being trained for “militant” and “leftist” activities.

He said the police carried out the operation after at least six Lumad parents made a complaint, saying that their children had been taken by their teachers without their consent.

Montejo added that the seven individuals who were arrested face charges ranging from kidnapping and illegal detention to human trafficking and child abuse.

The Society of the Divine Word (SVD), which runs the 238-year-old Catholic university, said it considered the incident with “serious concern”.

The organisation also denied the police allegations of kidnapping and human trafficking, saying that “no rescue” was needed, as it only provided temporary shelter and education to the displaced students, whose stay in Cebu had been prolonged as a result of the coronavirus lockdown.

“All throughout, they were nurtured, cared for, and treated with their best interest in mind,” it said.

Carlos Conde of Human Rights Watch in the Philippines said that the incident was the latest in the “targeting of Indigenous peoples”.

“For as long as anyone can remember, these Indigenous communities suffer from so-called ‘development aggression,’ where companies, often foreign-owned, build mining or plantation operations, displacing the Lumads. This has created intense anti-govt animosities among tribes,” he wrote on social media.

The Lumads, who have defended their lands from incursions, have long accused the government of neglecting their rights in favour of big business.

A 2020 Global Witness report said that at least 43 Philippine land-rights advocates, many of them from Lumad communities, were killed in 2019.

The Save Our Schools Network condemned the incident as “pure harassment”.

“It has been through the Save Our Schools Network that the Lumad continue their education and the protection of their ancestral lands,” the group said.

Congressman Carlos Zarate, who was also recently accused by the Duterte administration of being a communist sympathiser, has called for an inquiry into the incident.

“This is truly outrageous and condemnable,” Zarate said in a statement. “The Lumad students are there because the military destroyed their schools in Mindanao and now even in their evacuation school, they are being harassed and abducted.” 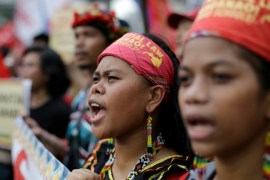 Colombia and the Philippines account for more than half those killed in 2019, with Indigenous people at greatest risk. 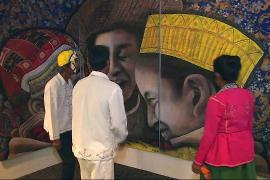 For decades, the Philippine island of Mindanao has been plagued by violence, as ethnic groups fight for more autonomy from the government. 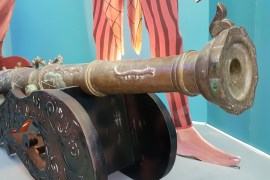