The United States has attempted to de-escalate a diplomatic dispute with NATO ally Turkey, which had earlier summoned the US ambassador about a statement on the killing of 13 kidnapped Turks in Iraq.

Turkish President Recep Tayyip Erdogan had lashed out at the State Department’s initial hesitance to blame the Kurdistan Workers’ Party (PKK) for the deaths, calling the initial US statement “a farce”.

Turkey said on Sunday fighters from the outlawed PKK executed the 13 captives, including Turkish military and police personnel. The PKK blamed Turkish air raids for the 13 deaths.

The US initially said it condemned the killings if it was confirmed that responsibility lay with the PKK.

Ankara, already angered by Washington’s partnership with Kurdish fighters in neighbouring Syria, was infuriated by the conditionality of the US statement and summoned the US ambassador to Ankara to convey “in the strongest terms” its reaction.

Later on Monday, US Secretary of State Antony Blinken in a phone call with his Turkish counterpart Mevlut Cavusoglu expressed condolences and said Washington believed the PKK was responsible for the deaths.

“The Secretary expressed condolences for the deaths of Turkish hostages in northern Iraq and affirmed our view that PKK terrorists bear responsibility,” State Department spokesman Ned Price said in a statement.

Turkey this month launched a military operation against PKK bases in northern Iraq that Erdogan said on Monday was designed in part to free the 13 hostages.

At least 48 members of the Kurdish armed group were also killed during the operation, according to Turkey’s defence minister.

The PKK, dubbed a “terrorist” group by the US and Turkey’s other Western allies, has been waging an armed rebellion against the Turkish state since 1984 that is believed to have left tens of thousands dead.

Ankara angered by US support to YPG

Turkey has been angered by the US support to Kurdish rebels in Syria known as People’s Protection Units or YPG, which Ankara has said is an offshoot of the PKK.

Following the US’s initial statement on Sunday, Erdogan earlier on Monday demanded that his NATO allies need to pick sides.

“After this, there are two options. Either act with Turkey with no ifs or buts, without questioning, or they will be a partner to every murder and bloodshed,” he said.

“The terrorist organisation on our doorstep, on our borders, is killing innocents.”

Al Jazeera’s Sinem Koseoglu, reporting from Istanbul, said the reason Erdogan is calling the West to pick a side is because Turkey believes the PKK is using weapons, provided by the international coalition, on Turkey’s citizens.

“Turkey has been criticising the US for providing weapons and arms for the YPG, which is the same as the PKK for Turkey, because Turkey believes those weapons provided by the international coalition [to the PKK] in the fight against ISIL in Syria will one day be diverted to Turkey,” Koseoglu said.

Robert Pearson former US ambassador to Turkey told Al Jazeera that it is an issue that Turkey and the US could address together to make sure their interests do not collide.

“Unfortunately, that terrorism group, which has also committed terrorist acts in Turkey, is still alive and still capable of being financed and operated.” 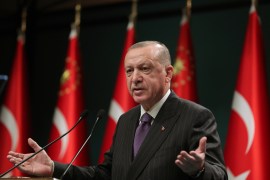 Turkey summons US ambassador over statement on killings

Turkish President Tayyip Erdogan accuses the US of backing terrorists after conditional statement on deaths of 13 Turks. 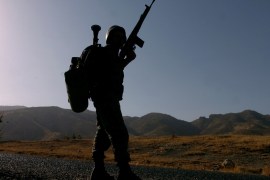 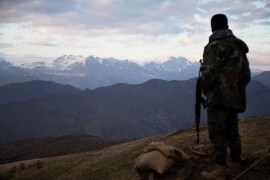 Fighting intensifies between Peshmerga and PKK in northern Iraq