A volley of rockets targeting a US airbase in Iraq’s Kurdish region killed a foreign civilian contractor and wounded nine others including Americans in the worst attack in a year on the US-led military coalition.

The rockets were launched late on Monday from an area south of the main city Erbil near the border with Kirkuk province and also fell on some residential areas close to the airport, officials said on condition of anonymity.

The barrage was the first time in nearly two months that Western military or diplomatic installations were targeted in Iraq after a string of similar incidents last year.

The rare attack on Erbil was claimed by a little known Shia group calling itself Awliyaa al-Dam, or Guardians of Blood.

About a dozen such groups have cropped up in the past year claiming rocket attacks, but US and Iraqi security officials say they are front groups for prominent pro-Iran factions including Kataib Hezbollah and Asaib Ahl al-Haq.

“The American occupation will not be safe from our strikes in any inch of the homeland, even in Kurdistan, where we promise we will carry out other qualitative operations,” the Awliyaa al-Dam said, according to the SITE Intelligence Group, an NGO that tracks online activity of armed organisations.

The US reacted angrily to the base assault outside the international airport in Erbil, capital of Iraq’s semi-autonomous Kurdish region.

“As always, the President of the United States and the administration reserves the right to respond and the time in the manner of our choosing. But we’ll wait for the attribution to be concluded,” Psaki added.

The US State Department said Secretary of State Antony Blinken spoke to Iraqi Prime Minister Mustafa al-Kadhimi about the attack on Tuesday.

Blinken “conveyed his outrage” and sent his condolences to the victims, spokesman Ned Price said in a statement.

Blinken and al-Kadhimi also “discussed efforts under way to identify and hold accountable the groups responsible for yesterday’s attacks”, Price said, “as well as the Iraqi government’s responsibility and commitment to protect US and Coalition personnel in Iraq at the government’s invitation to fight ISIS”.

Masrour Barzani, prime minister of the autonomous Kurdish region, condemned the assault “in the strongest terms”.

Coalition spokesman Wayne Marotto said 14 “107mm rockets” were launched near Erbil Airport in northern Iraq and three directly hit the base. He said the contractor who was killed was not Iraqi, but could not give immediate details on the victim’s nationality.

The airport is where foreign troops are based as part of an international alliance fighting the armed group ISIL (ISIS). It was reportedly shut down and flights were halted for safety issues.

Since Iraq declared victory against ISIL in late 2017, the coalition has been reduced to less than 3,500 troops in total, 2,500 of them Americans. Most are concentrated at the military complex at the Erbil airport.

Iran said on Tuesday it opposed any acts that harmed Iraq’s security and denied suggestions by some Iraqi officials that it had any link to the little-known group that claimed responsibility.

“Iran considers Iraq’s stability and security as a key issue for the region… and rejects any action that disturbs the peace and order in that country,” Iranian foreign ministry spokesman Saeed Khatibzadeh told state media. He condemned “suspicious attempts to attribute [the attack] to Iran”.

In December 2019, a US contractor was killed in a rocket attack on a base in Kirkuk province, prompting the US to respond with air raids against Kataib Hezbollah. In March 2020, another rocket attack killed two Americans – a soldier and a contractor – and a British soldier.

Delovan Jalal, the head of the local health directorate, said at least five civilians were wounded and one was in critical condition, AFP news agency reported.

Barzani said he had spoken to Iraqi Prime Minister Mustafa al-Kadhimi “on ways to cooperate and identify the outlaws behind this terror attack”.

“I condemn in the strongest terms tonight’s rocket attacks on Erbil. I urge all Kurdistanis to remain calm,” he tweeted.

I condemn in the strongest terms tonight’s rocket attacks on Erbil. I urge all Kurdistanis to remain calm.

I’ve instructed security services to start a full investigation and spoke with PM @MAKadhimi on ways to cooperate and identify the outlaws behind this terror attack -mb.

Western military and diplomatic sites have been targeted by dozens of rockets and roadside bomb attacks since 2019, but most of the violence has taken place in Iraq’s capital, Baghdad.

Iran-backed militia groups have been blamed for orchestrating the attacks, including the Kataib Hezbollah group.

In October, these groups agreed to an indefinite truce, but there have been several apparent violations since then, the most recent of which prior to Monday night was a volley of rockets targeting the US embassy on December 20.

Trump had said the death of a US contractor would be a red line and provoke US escalation in Iraq. 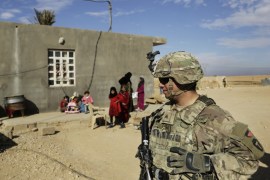 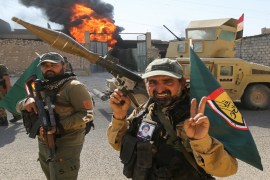 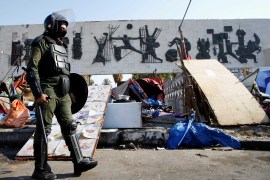