Tens of thousands of people have taken to the streets in Myanmar’s big cities for a ninth day of anti-coup demonstrations, as the country’s new military rulers rolled back laws protecting freedom and stepped up the arrests of politicians and activists.

Engineering students marched through downtown Yangon, Myanmar’s biggest city, on Sunday, wearing white and carrying placards demanding the release of former leader Aung San Suu Kyi, who has been in detention since the military overthrew her elected government on February 1.

Part of the biggest street protests in more than 10 years, a fleet of highway buses rolled slowly through the city, honking their horns in protest.

A convoy of motorbikes and cars drove through the capital, Naypyidaw.

In the southeastern coastal town of Dawei, a band played the drums in shadows cast by awnings as crowds marched under the hot sun. At least six policemen joined that protest, according to the Myanmar Now website.

And in the central town of Myingyan, huge crowds rallied on the streets, carrying placards that called for Aung San Suu Kyi’s release and denouncing “propaganda” by the state-run MRTV and MWD television stations.

In Waimaw, in the far northern Kachin state on the banks of the Irrawaddy River, crowds carried flags and sang revolutionary songs.

Many of the protesters nationwide held up images of Aung San Suu Kyi’s face. Her detention, on charges of importing walkie-talkies, is due to expire on Monday.

More than 384 people have been arrested since the coup, the monitoring group Assistance Association for Political Prisoners said, in a wave of mostly nightly arrests.

Verified detentions in relation to coup as expected rise…

384 individuals have been detained since 1 Feb

“While the international community is condemning the coup, Min Aung Hlaing is using every tool he has to instigate fears and instabilities,” activist Wai Hnin Pwint Thon from the UK-based rights group Burma Campaign UK said on Twitter, referring to the army chief.

Many protesters in Yangon carried signs calling on authorities to “stop kidnapping people at night”.

Residents banded together late on Saturday to patrol streets in Yangon and the country’s second-largest city Mandalay, fearing arrest raids as well as common crimes after the military ordered the release of thousands of prisoners. In different neighbourhoods, groups of mostly young men banged on pots and pans to sound the alarm as they chased down who they believed to be suspicious characters.

Worries about criminal activity have soared since Friday, when the military government announced it would free 23,000 prisoners, saying the move was consistent with “establishing a new democratic state with peace, development and discipline” and would “please the public”.

Unverified pictures on social media have fuelled rumours that criminals are trying to stir unrest by setting fires or poisoning water supplies.

Over a hundred people, mostly young men, armed with sticks and pipes gathered downtown shortly after a neighborhood woman began to bang pots and pans. She reported seeing two men dropped of by a police car. People are assuming they are part of the 23k recently released prisoners. pic.twitter.com/4CDIbh5wRt

Tin Myint, a resident of Sanchaung township in Yangon, was among the crowds who detained a group of four people suspected of carrying out an attack in the neighbourhood.

“We think the military intends to cause violence with these criminals by infiltrating them into peaceful protests,” he said.

He cited pro-democracy demonstrations in 1988, when the military was widely accused of releasing criminals into the population to stage attacks, later citing the unrest as a justification for extending their own power.

The government and army could not be reached for comment.

Arrests, roll back of freedoms

It also issued arrest warrants for seven high profile critics of military rule over their comments on social media and threatened action against members of the public who shelter the fugitives.

On the wanted list was Min Ko Naing, who spent more than 10 years in prison for helping lead protests against an earlier dictatorship in 1988 while still a university student.

“They are arresting the people at night and we have to be careful,” he said in a video posted on Facebook on Saturday, skirting a ban on the platform, hours before his arrest warrant was issued. “They could crack down forcefully and we will have to be prepared.”

Others with warrants against them included “Jimmy” Kyaw Min Yu, also a veteran of the 1988 student uprising, and singer “Lin Lin” Htwe Lin Ko.

The coup has been denounced by Western countries, with the United States announcing some sanctions on the ruling generals and other countries also considering measures. But Myanmar’s new military leadership has so far been unmoved.

An emergency session of the UN Human Rights Council on Friday called for the military to release all “arbitrarily detained” people and to hand power back to Aung San Suu Kyi’s administration.

Solidarity protests have been staged in neighbouring Thailand, home to a large community of Myanmar migrant workers, as well as the US, Japan and Australia.

But traditional allies of the country’s armed forces, including Russia and China, have dissociated themselves from what they have described as interference in Myanmar’s “internal affairs”.

The military insists it took power lawfully and has instructed journalists in the country not to refer to it as a government that took power in a coup.

“We inform … journalists and news media organizations not to write to cause public unrest,” said a notice sent by the information ministry to the country’s foreign correspondents’ club late on Saturday.

It also instructed reporters to follow “news media ethics” while reporting on events in the country. 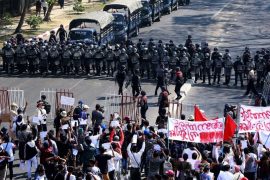 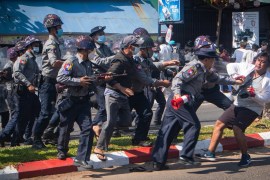 Myanmar under pressure at UN as rage against coup simmers 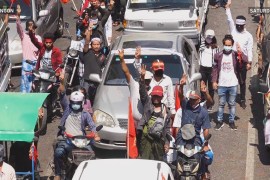 How will Myanmar’s military respond to anti-coup protests?

Tens of thousands of people have been protesting against this month’s military coup.