The Nigerian government has warned against planned protests to demand justice for victims of a shooting during peaceful demonstrations in Lagos last year demanding the dissolution of a notorious police unit long accused of abuses.

The youth-led rallies against police brutality brought Nigeria’s largest city to a standstill in October, in a campaign that swiftly widened to include demands about better governance. The #EndSARS protests, named after the police force, spread even after it disbanded and the government promised reforms.

Activists have called on social media for new protests on Saturday after a judicial panel authorised the reopening of the city’s Lekki toll gate, where security forces shot at peaceful protesters on October 20.

Rights group Amnesty International said soldiers and police killed at least 12 protesters in Lekki and another district. The military and police have denied involvement.

Nigeria’s Information Minister Lai Mohammed said on Thursday peaceful protests were a constitutional right but warned of the risk that the upcoming rallies could descend into violence in the name of justice. He warned the protest risked being “hijacked by hoodlums”.

“Any further resort to violence in the name of #EndSARS will not be tolerated this time. The security agents are ready for any eventuality,” he said.

“We therefore strongly warn those who are planning to reoccupy Lekki toll gate on Saturday to desist.”

The unrest in October led to the deaths of six soldiers, 37 policemen and 57 civilians, as well as the destruction of 269 private and public properties, Mohammed said.

Nigerians, angry at the decision to restart activities at a symbolic site where unarmed civilians died, have called for fresh protests. Using the #OccupyLekkiTollGate hashtag on Twitter, activists are calling others to take part in the protest set to start on Saturday at 7am local time.

“No Justice, No Re-Opening. You can’t open a tollgate where victims of state-sanctioned murder are yet to get justice,” was a slogan widely shared on social media this week.

I can't keep calm for all my brother's and sisters who's blood was shed due to the #endsars protest and died at the lekki toll gate
We move again to #OccupyLekkiTollGate Feb 13th, 7am ✊

Some advised protesters to wear protective gear as “possible brutality may occur”.

The State Vs The People
13th February, 2021.
Protesters should go with protective gears, this battle will be tough as possible brutality may occur. May God be with us all! 🙏🏾#OccupyLekkiTollGate

Others are worried that the protest could be used as an excuse to loot properties and have called for a counterprotest to take place on Saturday at Lekki, with the hashtag “#DefendLagos” also trending on social platforms.

Lagos State Commissioner of Police Hakeem Odumosu said on Thursday that no protest will be allowed to take place on Saturday.

“Allowing both groups to carry out their planned protests will be counterproductive,” Odumosu was quoted as saying by local media. “No protest in any guise will be allowed to take place on Saturday.”

Nationwide protests against police brutality were largely peaceful until the October 20 shooting, which sparked international condemnation and calls for the authorities to refrain from using excessive force.

The demonstrations ended abruptly after the shooting and a wave of looting and unrest followed.

An investigation into last year’s violence at Lekki has stalled with representatives of the armed forces failing to appear before the panel.

Security forces say they only used blank rounds to break up protesters who had defied a curfew.

The company in charge of the tollgate had stopped working, but the judicial panel launched by the state of Lagos said it could resume its work. 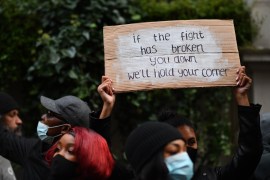 Months after the 2020 protests, people are struggling with mental health issues in a country with few resources to help. 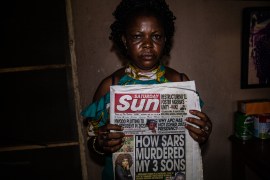 Families seek justice for loved ones lost at the hands of Awkuzu SARS, a notorious station in southeastern Nigeria. 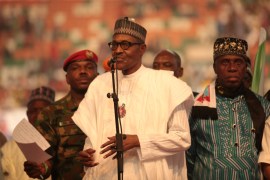 Buhari has been under pressure due to the deteriorating security situation in the country. 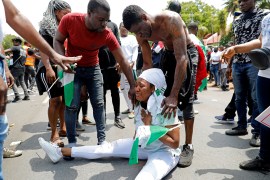