Two refugee camps caught up in a brutal conflict in Ethiopia’s northern Tigray region have been closed and their Eritrean residents relocated, authorities have confirmed, as the country’s state-appointed human rights commission reported that both sites had been “destroyed”.

The United Nations’ refugee agency (UNHCR) has called for protection for the residents of the Shimelba and Hitsats camps, which it says were attacked by armed men who killed and abducted refugees. Last week, it said occupants – who often leave to escape mandatory, indefinite military service and repression or search for better opportunities out of one of the world’s most isolated states – had reported that Eritrean soldiers had forced some refugees back into Eritrea.

The alleged Eritrean military presence is one of the most contentious issues in the border region of Tigray, where Prime Minister Abiy Ahmed’s government has claimed victory over rebellious regional authorities in a conflict that began in early November.

Eritrea and Ethiopia have both denied that Eritrean troops operated on Ethiopian territory. The removed Tigrayan regional authorities and many residents accuse neighbouring Eritrea of intervening on the behalf of the central government in Addis Ababa. Reports from all sides are difficult to verify because communications to the region of some six million people remain patchy and the government tightly controls access.

On Thursday, the Ethiopian Human Rights Commission (EHRC) said it has learned that Shimelba and Hitsats “had been destroyed and the refugees inside the camps dispersed”. Earlier this week, the Norwegian Refugee Council also said the destruction of its facilities at the camps was confirmed using satellite imagery.

“We condemn the criminal destruction of our buildings and facilities that we set up to serve refugees in great need,” Jan Egeland, NRC’s secretary-general, said in a statement. “This rampage of burning and looting by armed men deepens an already dire crisis for millions of people.”

We condemn the criminal destruction of our buildings and facilities that we set up to serve refugees in Tigray, Ethiopia.

This burning and looting rampage by armed men deepens an already dire crisis for millions of people. #NotATarget https://t.co/SIR2mSu7N8

But Tesfahun told Reuters news agency the description of destruction was an “overstatement”.

“There was a lot of fighting in those areas, not in the camps but in those areas where the camps are located,” he said. “Refugees didn’t get the necessary services quickly and also they panicked due to the firing happening around the camps. So they left the camps, and Ethiopian defence forces sheltered them and escorted them to the nearest towns of Tigray,” he said.

He said 5,300 refugees had gone to two other refugee camps in Tigray. Others were now in Tigray towns or the capital, Addis Ababa.

Chris Melzer, a UNHCR spokesman, said the agency concurred with the conclusion that the camps were now unsafe, “considering the reports of attacks on Hitsats and Shimelba, the reports of abductions, destruction, looting, and killing of humanitarian staff”. Decisions to relocate must be voluntary and movements must be organised in safety and dignity, he said.

The UN said on February 1 that refugees who had fled from Shimelba and Hitsats spoke of “infiltration of armed actors in the camps, of killings, abductions and also some forced returns to Eritrea at the hands of Eritrean forces”.

In December, a UN team was shot at when it tried to reach the Shimelba camp. Two diplomatic sources told Reuters news agency the UN team had encountered uniformed troops from Eritrea.

Protests broke out in Mekelle on Tuesday and continued on Wednesday, with residents blocking roads, protesting against reported killings by Eritrean troops and the failure of elders to stop the war, according to Reuters. One person was shot dead after soldiers opened fire on protesters, the news agency cited residents and an aid worker as saying.

Eteneshe Nigusse, spokeswoman for a government-appointed interim administration in Tigray, said she needed to check casualty reports with security. She told Reuters “the presence of the Eritrean army in Tigray” was a major issue raised at a meeting of religious leaders, elders and the public on Tuesday.

Last week, the UN warned life for civilians in Tigray has become “extremely alarming and continues to deteriorate rapidly” as hunger grows and fighting remains an obstacle to aid reaching millions of people.

This week, the global body’s food agency said it had reached a deal with the Ethiopian government to expand access for aid workers and “scale up” operations in Tigray.

On Wednesday, the Ethiopian Red Cross said 80 percent of the region has been cut off from humanitarian assistance and tens of thousands of people could starve to death.

Francesco Rocca, president of the International Federation of Red Cross and Red Crescent Societies (IFRC) who visited Tigray this week, told Al Jazeera he was “shocked” by what he encountered, describing accounts by people displaced by the fighting as “unbearable”.

“The situation there is one of the most difficult I’ve ever seen. The people there are missing almost everything,” he said, sounding the alarm over the lack of food, life-saving medicines and essential services.

Rocca said only four hospitals out of 40 are operational in the region and are all facing major shortages in medical supplies that have crippled doctors’ ability to perform any surgeries. He also decried the “unacceptable” looting that has ravaged most of the health facilities in the region. 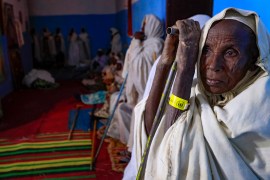 World Food Programme says it will ‘scale up’ operations in embattled region after reaching deal with Addis Ababa. 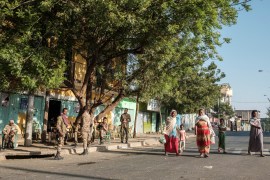 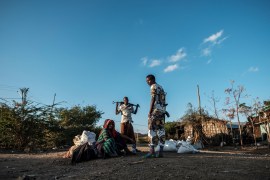