Wearing masks, gloves and face shields, voters across Myanmar on November 8 braved surging coronavirus infections as they turned out en masse to cast their ballots in the country’s second democratic vote since the end of military rule in 2011.

At polling stations in Myanmar’s largest city, Yangon, the enthusiasm was palpable.

“People are excited to vote, as they would like to escape from the political struggles,” one poll worker said at the time. “They want real democracy.”

Trouble, however, was already brewing.

Just days before the polls, Myanmar’s powerful military chief Min Aung Hlaing had raised the possibility the army may not accept the outcome of the election. Accusing Nobel laureate Aung San Suu Kyi’s government of “unacceptable mistakes”, he told a local news outlet that “we are in a situation where we need to be cautious” about the results of the poll.

Aung San Suu Kyi’s National League for Democracy (NLD) went on to secure a landslide victory, taking more than 80 percent of the vote and increasing its support from the 2015 vote. But the result drew immediate allegations of fraud and calls for a rerun from the military-backed Union Solidarity and Development Party (USDP). The Tatmadaw, as the military is known, supported the USDP’s assertions, claiming without proof that its own investigation had found 10.5 million suspect votes.

Then, on Wednesday, Min Aung Hlaing threatened to repeal the constitution.

The apparent coup threat prompted widespread international condemnation and the military walked back its warning, saying the media had misinterpreted the general’s comments.

But by Monday morning, the threat had become a reality.

Just 10 years after initiating a transition to civilian rule, the Tatmadaw was back in control in Myanmar, with top civilian leaders including Aung San Suu Kyi and President Win Myint detained, soldiers out in the streets and phone and internet services cut in large parts of the country.

Hours after the coup, the military declared a one-year state of emergency, using as a pretext the NLD government’s alleged failure to act on its claims of “terrible fraud”. It also pledged new elections, but did not provide a time frame, and announced that power had been handed over to Ming Aung Hlaing.

The general, who is required by law to retire from his military post when he turns 65 in July, has long harboured presidential ambitions, according to Melissa Crouch, professor at the Faculty of Law, University of New South Wales in Sydney, Australia. It was the USDP’s humiliating showing in the November election that thwarted his goal, she said.

The Tatmadaw – under a constitution it drafted in 2008 – already appoints 166 or 25 percent of seats in the parliament, and the USDP would have needed to secure another 167 seats to appoint Min Aung Hlaing as the country’s president.

Crouch said Monday’s coup – coming just hours before the new parliament was set to meet for the first time – was fuelled by the military’s realisation it had no other option to regain the presidency.

“To get the office of the president back in their hands, they had to act outside of the law … And in a year’s time, they’ll allow a fresh election to take place. If the USDP was successful in getting a third of the seats, then it’s possible that Min Aung Hlaing could become president.”

Min Aung Hlaing, previously a little known figure outside the army, was appointed as commander-in-chief in 2011, just as Myanmar began transitioning to civilian rule following 49 years of military governments.

When the NLD won 2015’s multi-party elections, the general began positioning himself as a candidate for the presidency. He did not retire as expected in 2016, transforming himself – with the aid of social media – from aloof soldier into a public figure. Facebook pages dedicated to the general publicised his activities, including visits to monasteries in the Buddhist-majority country, and meetings with dignitaries.

One of the pages had 1.3 million followers and acted as the military’s main outlet for information, particularly during the Tatmadaw’s brutal crackdown on the Rohingya minority in 2017. The operation – which included mass killings, gang rape and widespread arson – drove some 730,000 Rohingya into neighbouring Bangladesh. The following year, Facebook took down the two pages.

Both the United States and the United Kingdom have since imposed sanctions on Min Aung Hlaing over the campaign, which United Nations investigators said were executed with “genocidal intent”.

Frontier Myanmar, a current affairs magazine based in Yangon, said the fact that Min Aung Hlaing is “one of most wanted men on the planet” due to his role in the atrocities committed against the Rohingya also contributed to the general’s anxiety about his future. “Appointing a loyalist to replace him as commander-in-chief would have helped, but that seemingly was not enough to assuage his concerns,” it said in a commentary.

On Monday, the US threatened new sanctions on Myanmar over the military’s “direct assault on the country’s transition to democracy and rule of law”, while the UK said it would work diplomatically with its allies to “ensure a peaceful return to democracy”. Leaders from around the world also condemned the coup, but neighbouring China – one of Myanmar’s most influential economic partners – said it “noted” what happened and urged all sides to “resolve differences” to maintain stability.

Meanwhile, Justice for Myanmar, a campaign group, said Monday’s coup was not just about preserving Min Aung Hlaing’s political influence, but also his wealth. The general “has exploited his position as commander-in-chief for his personal gain, and today’s coup extends that power and privilege,” the group said in a statement.

The campaigners said businesses owned by Min Aung Hlaing’s children have profited from their access to state resources during his tenure and noted that as commander-in-chief, Ming Aung Hlaing has ultimate authority over the military’s two major conglomerates – Myanmar Economic Corporation (MEC) and Myanmar Economic Holdings Limited (MEHL) – which hold investments in various sectors, including gems, copper, telecoms and clothing.

UN investigators have previously called on world leaders to impose targeted financial sanctions on the two firms, saying the revenue generated from such businesses strengthened the military’s autonomy from civilian oversight and provided financial support for their operations.

“If democratization progresses and there is accountability for his criminal conduct, he and his family stand to lose their revenue streams,” Justice for Myanmar said.

“This is a Min Aung Hlaing coup, not just a military coup,” said Mark Farmaner, director of the UK-based Burma Campaign. “It is about his position and his wealth.”

This is a Min Aung Hlaing coup, not just a military coup. It is about his position and his wealth. https://t.co/FsjOGPKyVc

Key to the Myanmar coup is army leader Gen Min Aung Hlaing, who was near forced retirement, had "no clear way to maintain his current level of" power and profit, and is "one of the most wanted men on the planet" for leading atrocities against the Rohingya. https://t.co/esVgraaTtI pic.twitter.com/ffgDYlIjFI

‘Decisions of life and death’

Other analysts said the military’s institutional interests were also at play.

The NLD’s election win put the military in a “weaker bargaining position”, said Bridget Welsh, an honorary research associate at the University of Nottingham’s Asia Research Institute in Malaysia.

The military’s unelected parliamentary quota gives it veto power over constitutional amendments, but “their position would have been weakened when there was a much larger majority on issues of laws”, she said. “And that poses a great challenge to the military’s position and authority in Myanmar.”

While Min Aung Hlaing has successfully executed a coup, observers say questions remain about his and the military’s ability to retain power.

The NLD, in a statement attributed to Aung San Suu Kyi, urged the people of Myanmar to “wholeheartedly protest” against Monday’s coup, and analysts say the younger generation, who have lived in a more open system, are likely to react.

“Most people in Myanmar are probably not supportive of the coup,” said Jay Harriman, an analyst at BowerGroupAsia.

“They are likely wrestling with what to do, as we speak. These are decisions of life and death. When they did resist the military takeover in 1988, thousands were reportedly killed. And these events are likely going through a lot of people’s minds as they think about what an appropriate response is.” 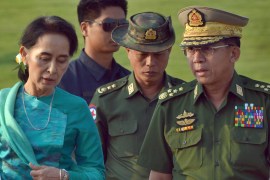 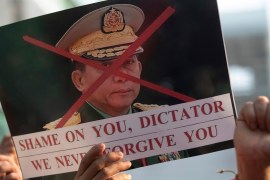 US threatens action over Myanmar coup as Australia calls for release of detained leaders, including Aung San Suu Kyi. 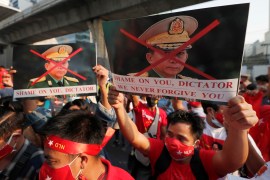