A criminal gang is colluding with Bangladesh’s security forces to extract bribes for state contracts and job positions, all the while maintaining powerful links with the country’s Prime Minister Sheikh Hasina, an Al Jazeera investigation has found.

All the Prime Minister’s Men reveals how Haris and Anis Ahmed, both convicted of murder, are being protected by their brother, a high-ranking military officer, after they fled abroad to escape law enforcement.

Their brother is General Aziz Ahmed, head of the Bangladesh Army and close confidant of Prime Minister Sheikh Hasina, leader of the ruling Awami League.

During the two-year investigation, Al Jazeera’s Investigative Unit managed to track down Haris and Anis Ahmed, who were found guilty for their involvement in the 1996 murder of Mustafizur Rahman Mustafa, said to be a member of a rival political party, in Dhaka.

Following that murder, both Haris and Anis fled from the authorities and went into hiding abroad.

Haris, who is still on the country’s list of most wanted criminals, fled to Budapest, Hungary, and has been living there using the assumed identity of Mohammad Hasan.

The second brother, Anis Ahmed, is living in Kuala Lumpur, where he escaped to after his murder conviction was upheld in 2007.

Despite the fact that they are wanted by Bangladesh law enforcement, General Aziz stays in contact with both his brothers.

In March 2019, Haris and Anis even visited Dhaka for the wedding of Aziz’s son, where the two fugitives partied alongside Bangladesh’s President Abdul Hamid and foreign dignitaries during an opulent ceremony.

Since his escape from Bangladesh, Haris has been using the fake identity, Mohammad Hasan.

Leaked documents obtained by Al Jazeera reveal how General Aziz used military officers to help Haris create that false identity, which was then used to set up businesses in Europe and buy properties around the world.

Al Jazeera also obtained the fake documentation used to create “Mohammad Hasan’s” passport, which was signed by a person later revealed to be part of a network involved in passport fraud.

Meanwhile, in a series of covert recordings, Haris revealed that the Ahmed clan continues to make money in Bangladesh by selling positions in the national and Dhaka police forces in collusion with senior officers.

He claimed the scheme also involves kickbacks to at least one senior government minister.

“The transfer bribe is taken by the home minister, the inspector general and the police commissioner,” he continued.

EXCLUSIVE: How a criminal gang claims to have captured the Bangladesh state.
Getting rich from their links to Prime Minister Sheikh Hasina and using state security forces as their personal thugs.
Follow the story with #DhakaMafia

In other recordings, Haris boasts of profits he made from military contracts using his brother’s power as army chief to extract bribes.

He also claims he has the support of the politician he used to protect, saying: “Even the prime minister (Sheikh Hasina) has said: ‘If Haris wants to do something, let him do it. We will help’.”

A surveillance team followed General Aziz to Kuala Lumpur, where he and Anis were given a diplomatic escort to the Bangladesh High Commission.

The Ahmed clan’s fortunes have been long intertwined with that of Prime Minister Sheikh Hasina.

Haris and Anis were Hasina’s bodyguards when her life was threatened during the time she was an opposition politician, and leader of the Awami League, in the 1980s and 1990s.

In a phone recording obtained by Al Jazeera, General Ahmed recounts how Hasina defended the brothers to critical party officials.

“Look, you don’t know better than me who his brothers are. Where were you all… when grenades were thrown in my house?” the general recalled Hasina saying to the critics.

“These things were happening to my house. Where were you? This chief’s brothers (General Aziz Ahmed) were all around me. They were my mainstay.”

In total, the Ahmed clan consisted of five brothers, four of whom ended up in the criminal underworld.

Josef Ahmed, deemed one of the most dangerous criminals in Bangladesh, was sentenced to death for his involvement in the 1996 murder.

However, he was released in May 2018 after a presidential pardon, with the backing of Prime Minister Sheikh Hasina.

The fifth Ahmed brother, Tipu, was killed in a gangland shooting in 1999.

The Investigative Unit contacted all those involved in this investigation, including Bangladesh’s prime minister, home minister, inspector general, police commissioner and all four Ahmed brothers.

They were all invited to respond to the investigation’s findings before release. None did so.

It dismissed statements made by the brother of Bangladesh’s Chief of Army Staff as baseless and said Haris Ahmed had no links to Prime Minister Sheikh Hasina or any other state institution. 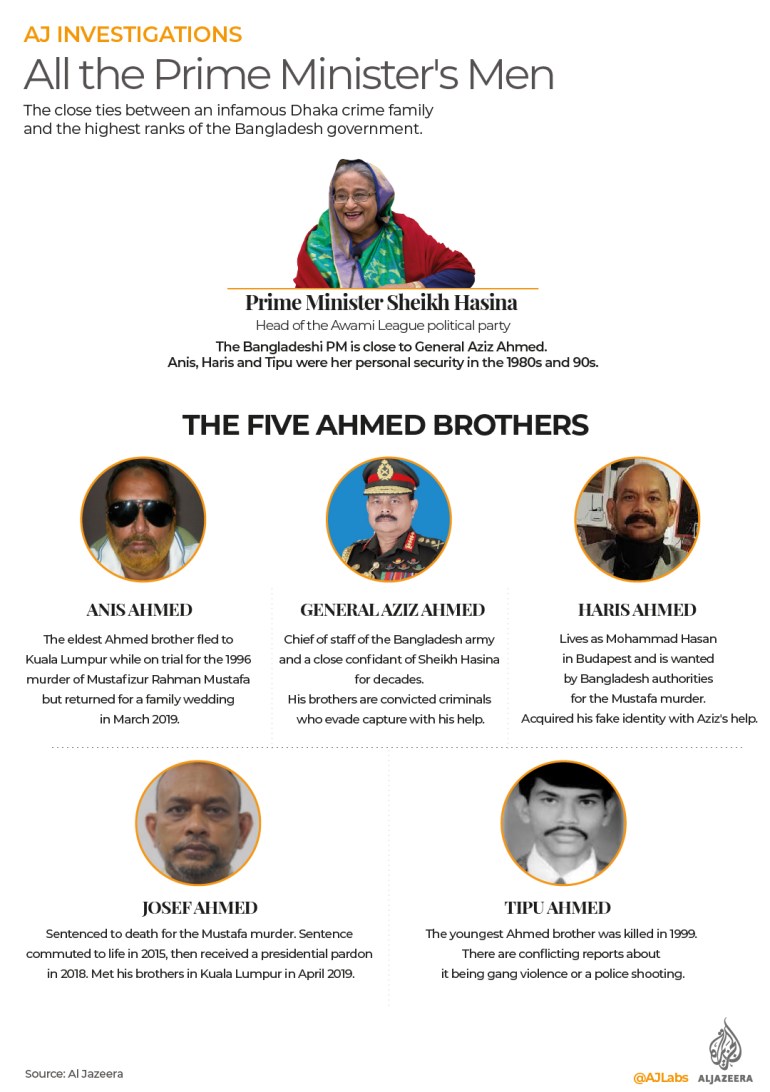 In the coming days, Al Jazeera’s Investigative Unit will release several other news stories related to All The Prime Minister’s Men.

The film will be shown on Al Jazeera English on the following times: