A powerful magnitude 7.3 earthquake has struck eastern Indonesia, triggering a tsunami warning and sending residents fleeing from their homes in panic.

But Tuesday’s quake, which struck at 03:20 GMT, caused only minor damage and injured one person, authorities later said.

The tsunami warning was lifted after about two hours.

According to the US Geological Survey, the quake hit at a depth of 18.5 kilometres (11.5 miles) under the sea. Its epicentre was located 112km (74 miles) north of the town of Maumere, the second-largest on the island in East Nusa Tenggara province.

“I was in the field. People ran in panic. I am still … scared,” Nuraini, a resident of Adonara island, told the AFP news agency.

“It felt like a wave, up and down,” Zacharias Gentana Keranz, a resident of Larantuka town told the Reuters news agency.

Videos provided by the governor’s office in East Nusa Tenggara showed people screaming as they gathered on the street while the earth shook.

Another video provided by the same source showed a slight increase in the level of water in one coastal area in the province but no major tsunami was reported. 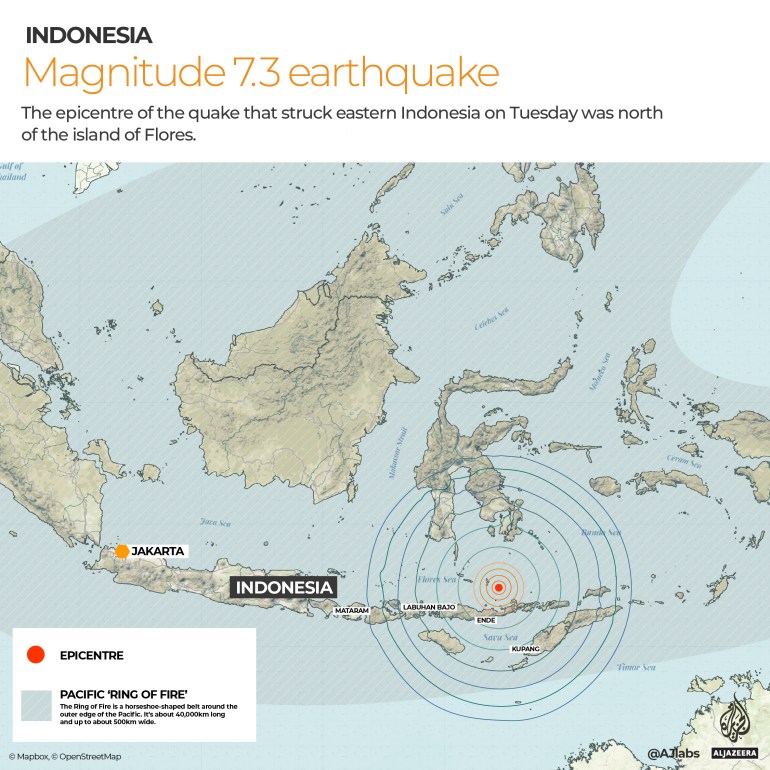 The Indonesian disaster mitigation agency said one person was injured in Manggarai, on Flores island, and a school building and several homes were damaged on Selayar island, in South Sulawesi.

The agency said it was still assessing the effect of the quake.

The tremor, from an active fault in the Flores Sea, was followed by at least 15 aftershocks with the biggest registering magnitude 5.6, the meteorological agency said.

Indonesia experiences frequent quakes and volcanic eruptions due to its position on the Pacific “Ring of Fire”, an arc of intense seismic activity where tectonic plates collide that stretches from Japan through Southeast Asia and across the Pacific basin.

Among Indonesia’s string of deadly quakes was a devastating 2004 magnitude 9.1 tremor that struck off the coast of Sumatra and triggered a tsunami that killed 220,000 throughout the region, including about 170,000 in Indonesia.

The Boxing Day disaster was one of the deadliest natural disasters in recorded history.

In 2018, a powerful quake shook the island of Lombok and several more tremors followed over the next couple of weeks, killing more than 550 people on the holiday island and neighbouring Sumbawa.

Later that year, a magnitude 7.5 quake and a subsequent tsunami in Palu on Sulawesi island left more than 4,300 people dead or missing.

On December 4, at least 48 people were killed and hundreds injured when the Mount Semeru volcano erupted on Java island on December 4.

With additional reporting by Aisyah Llewellyn