At least 60 people have been killed and dozens more injured after a truck carrying fuel exploded in the northern Haitian city of Cap-Haitien, a local official said, as authorities are calling for additional supplies and staff to help treat the victims.

The explosion occurred just after midnight on Tuesday in Haiti’s second-largest city, on the country’s northern coast, where survivors rushed outside and yelled as they observed how the fire consumed part of their neighbourhood.

Hours later, a local hospital was overwhelmed with injured people as it pleaded for basic supplies and more medical staff.

“We have now counted 60 deaths,” said Deputy Mayor Patrick Almonor, adding that authorities were still searching for victims amid the charred debris.

According to Almonor, it appeared the truck driver lost control as it swerved to avoid a motorcycle taxi and the tanker flipped over. He said fuel spilled onto the road and pedestrians rushed to collect it.

“It was after midnight and I heard a loud noise so I asked one of my boys to go and look. He told me a gasoline truck exploded,” said Abraham Joanis, 61, as he carried around a guitar rescued unscathed from the charred remains of his home.

“Right away, I left with my family, and I headed the other way to the bridge,” he added.

More than 100 people were reported injured in the explosion that also burned about 20 homes near the site, Almonor said, adding that the number of deaths is expected to keep rising because people who died in their homes have not yet been counted.

“It’s horrible what happened,” the deputy mayor said. “We lost so many lives.”

The incident occurred as Haiti is struggling with widespread fuel shortages and spiralling gas prices, caused in part by armed gangs that have set up blockades at fuel terminals in the capital, Port-au-Prince, and surrounding areas.

Gang violence and political instability have skyrocketed in Haiti following the July assassination of President Jovenel Moise. The country also has struggled to rebuild in the aftermath of a devastating, 7.2-magnitude earthquake in August.

Translation: Three days of national mourning will be decreed throughout the territory, in memory of the victims of this tragedy that has devastated the entire Haitian nation.

As rescue workers cleaned up in the aftermath of the explosion in Cap-Haitien, bodies covered in white sheets lay on the ground before they were loaded on to trucks to be taken away.

Haitian Prime Minister Ariel Henry, who travelled to the city on Tuesday, said the explosion had left dozens injured.

“Three days of national mourning will be decreed throughout the territory, in memory of the victims of this tragedy that has devastated the entire Haitian nation,” Henry wrote on Twitter earlier in the day, adding that field hospitals would be set up in Cap-Haitien to care for the victims.

Former Prime Minister Claude Joseph also mourned the victims, tweeting: “I share the pain and sorrow of all the people.”

Meanwhile, the nearby Justinien University Hospital was overwhelmed with patients as those injured were transported to the facility.

“We don’t have the ability to treat the number of seriously burned people,” a nurse told the AFP news agency. “I’m afraid we won’t be able to save them all.” 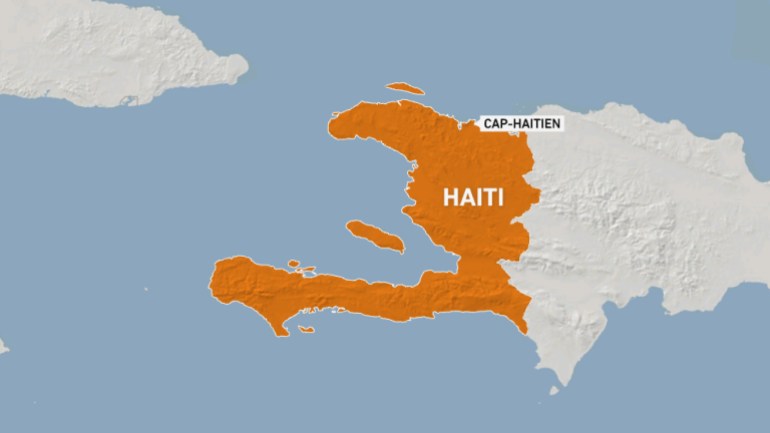 Mayor Pierre Yvrose described the situation as “critical” and called for additional resources. “We need human resources, and also material resources, namely, serum, gauze, and anything that can be used in case of serious burns,” Yvrose said.

The total number of injured was still not known.

The United Nations office in Haiti said it was ready to help the national authorities in its response, and offered its condolences to the families of the victims.

The UN’s child rights agency (UNICEF) also said later on Tuesday that it was working in coordination with the Haitian health ministry and other partners to send six emergency kits to Cap-Haitien “for the treatment of people with burns”.

Haiti has never produced enough electricity to meet the needs of the whole population. Even in well-off parts of the capital, the state-run Haiti electric utility provides, at most, only a few hours of power a day.

Those who can afford it rely on pricey generators, which are no help in the face of the severe fuel shortage caused by gangs blocking access to the country’s oil terminals.

.@UNICEFHaiti works with the Ministry of health @MsppOfficiel and partners to ship 6 emergency medical kits composed of emergency drugs, consumables and materials to the 2 hospitals in Cap Haitien for the treatment of people with burns. pic.twitter.com/r5sz9FupTE