Tigrayan fighters “are in the town centre, there’s no fighting,” said a resident reached by telephone on Sunday afternoon.

“They came back. They’re already here,” said another, adding that they appeared to have come from the east, in the direction of Waldia.

“The population, most of the people are scared. Some are running away. Most of the people, they already left because there might be a revenge. We expressed our happiness before when the junta left.”

Lalibela is home to 11 medieval rock-cut churches and a site of pilgrimage for the Ethiopian Orthodox Church.

The Tigray People’s Liberation Front (TPLF) rebel group’s military leadership said in a statement shared with pro-TPLF media they had launched “widespread counter-offensives” in numerous locations including along the road linking Gashena and Lalibela.

“Our forces first defended and then carried out counter-offensives against the massive force that was attacking the front at Gashena and the surrounding areas to achieve a glorious victory,” it said. 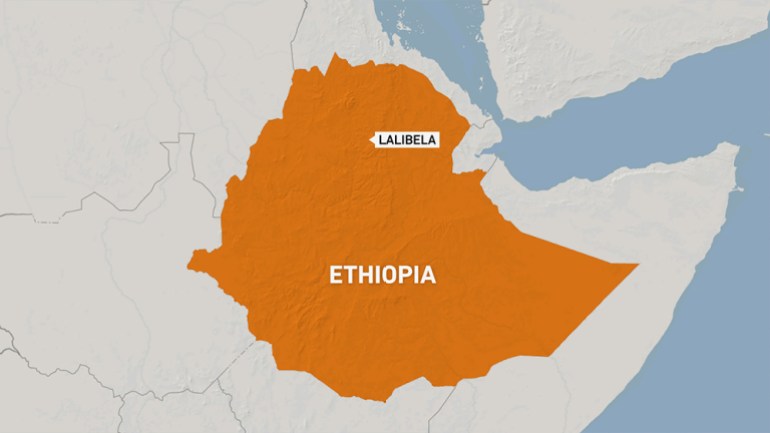 Government spokesperson Legesse Tulu did not respond to requests for comment on the reported recapture of the town.

One of the witnesses who spoke to Reuters said that special forces from the Amhara region and their fighter allies, both allies of the Ethiopian government, began leaving Lalibela on Saturday night.

“The last batch left this morning. We heard gunshots from a distance last night but the Tigrayan forces recaptured Lalibela without firing guns in the town,” said the witness, a hotel receptionist, by phone.

Abiy to the front

Military sources have told Al Jazeera that pro-government forces are advancing towards the city of Waldia – a stronghold of the TPLF.

Forces aligned with the TPLF had taken control of the town in early August.

But on December 1, Ethiopian troops and their Amhara regional allies recaptured the town.

That news was one of a number of reported gains on the battlefield against the Tigrayan forces, who had in November pushed south and threatened to march on Ethiopia’s capital, Addis Ababa.

In a tweet late on Saturday, Prime Minister Abiy Ahmed’s office said he had “headed to the front again” and forces under his leadership had captured several strategic locations in Afar and Amhara including the towns of Arjo, Fokisa and Boren.

“We will continue the remaining areas … nothing will stop us. The enemy will be destroyed,” he said this week.

The offensive recaptured many towns this month, the prime minister’s office said, pushing Tigrayan forces back more than 180 km.

Last week the government announced its forces had recaptured the strategic towns of Dessie and Kombolcha.

Earlier this month the government said its forces recaptured several small towns including Shewa Robit, a town some 220km (135 miles) from the capital Addis Ababa.

The year-long conflict between the federal government and the leadership of the northern region of Tigray has killed thousands of civilians, forced millions to flee their homes, and made more than nine million people dependent on food aid.

A second witness told Reuters on Sunday that residents had begun fleeing the town. “We panicked, we never saw this coming. TPLF forces are now patrolling the town wearing their uniforms,” the witness said.