It was just the latest occurrence in a spate of jailbreaks that has been unravelling in Africa’s most populous country since 2010. More than 7,000 people have escaped from several prisons over that period, with many still remaining at large, according to an Al Jazeera analysis of data from local media reports and escapee numbers provided by officials. The figure amounts to a tenth of the total official number for those currently in custody nationwide, a regularly updated summary of the inmate population published by the Nigerian Correctional Service (NCS) shows.

In the past 14 months alone, there have been eight successive jailbreaks, more than double the number of such incidents in the previous three years. This figure does not include riots, foiled prison break attempts, or clashes between armed non-state actors and law enforcement at police stations to forcefully release detained suspects. Last month, security operatives foiled a bizarre attempt by criminals seeking to hijack a suspect from the Lagos court building where he was standing trial. 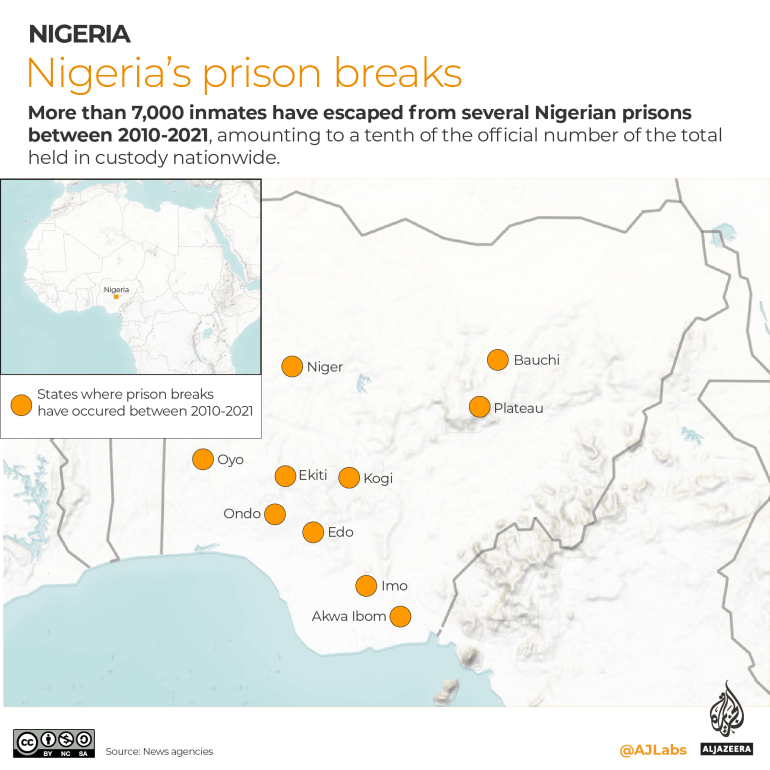 Nigeria’s penitentiary system has long been saddled with a multitude of problems. The country’s criminal and penal codes are archaic, while the infrastructure is mostly a relic of the British colonial era (the Benin prison dates back to 1906), long before Nigeria’s population explosion and a consequent rise in crime.

Even worse, the facilities are some of the most overcrowded globally, with Nigeria ranking 49th on a list of 206 countries in the World Prison Brief published by the University of London’s Institute for Crime & Justice Policy Research. The Ikoyi prison, built in 1955 for a capacity of 800 people, now accommodates approximately four times that number. The absence of a public security surveillance system has also placed the burden of ensuring security on manual monitoring by security personnel, who are underpaid and underequipped.

According to the NCS, there are currently 70,653 prisoners across 240 centres nationwide. Only a third of them have been convicted while the rest are filed under “awaiting trial”. The latter category is local legal parlance for suspects who have been jailed for years for petty crimes such as shoplifting and traffic offences without conviction. In some facilities, those “awaiting trial” represent up to 90 percent of the total prison population, whose true number is believed to be much higher than the official one.

“There are individuals in these facilities who don’t know when they are going to go out, some [are in] for offences that they would’ve been discharged even if they were convicted,” said Uju Agomoh, director at the Prisoners’ Rehabilitation and Welfare Action (PRAWA) group.

“So you see a situation where within, there is tension because of this disproportionate number of persons who have not been convicted and it begins to be overbearing on the infrastructure, cell spaces, water, health – everything.” 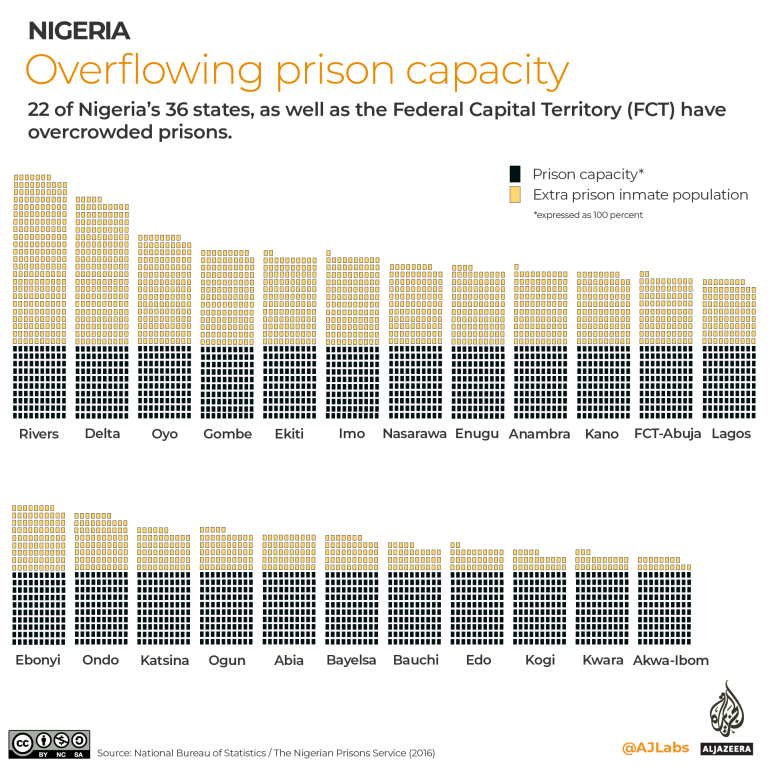 Consequently, the prisons have been susceptible to all manner of attacks in recent years, including invasions by armed groups or unknown gunmen, to riots by inmates.

An exception was an October 2019 jailbreak triggered by a flooding incident at the Koton-Karfe prison in Kogi, south of the capital, Abuja. More than 200 inmates escaped as floodwaters overwhelmed the prison fences, prompting Lazarus Ogbee, the federal politician heading a committee on reformatory exclamations, to say: “This nature of jailbreak is first of its kind in the whole world and to say the least, embarrassing.”

Correctional centres in Kogi have also been attacked by inmates and by Boko Haram, twice.

The attacks often result in many casualties. In the latest incident in Jos prison, at least 10 people were killed and seven were critically wounded.

In July, Interior Minister Rauf Aregbesola admitted that the facilities have “shot above the capacity by 18 percent”. The government official, who has called for an introduction of a parole system, also said some of the jails outside the big cities of Kano, Port Harcourt and Lagos are under-populated.

According to Agomoh, a solution could be that the NCS comptroller-general move prisoners from crammed centres to under-populated ones to even out the disparities. Assistant comptroller-generals can do so within their zones of jurisdiction, too.

But the high number of inmates yet to be convicted means any movement could cause administrative and logistical challenges.

Data, meanwhile, shows all the jailbreaks over the past decade have happened outside the major cities, but in congested prisons nonetheless. Recent figures on the ratio between intended capacity and current capacity are hard to find, but a 2016 report by the Nigerian National Bureau of Statistics (NBS) said Kogi, which has averaged one jailbreak every two years in the past 10 years, had an extra 133 inmates above its assigned capacity of 530 then. 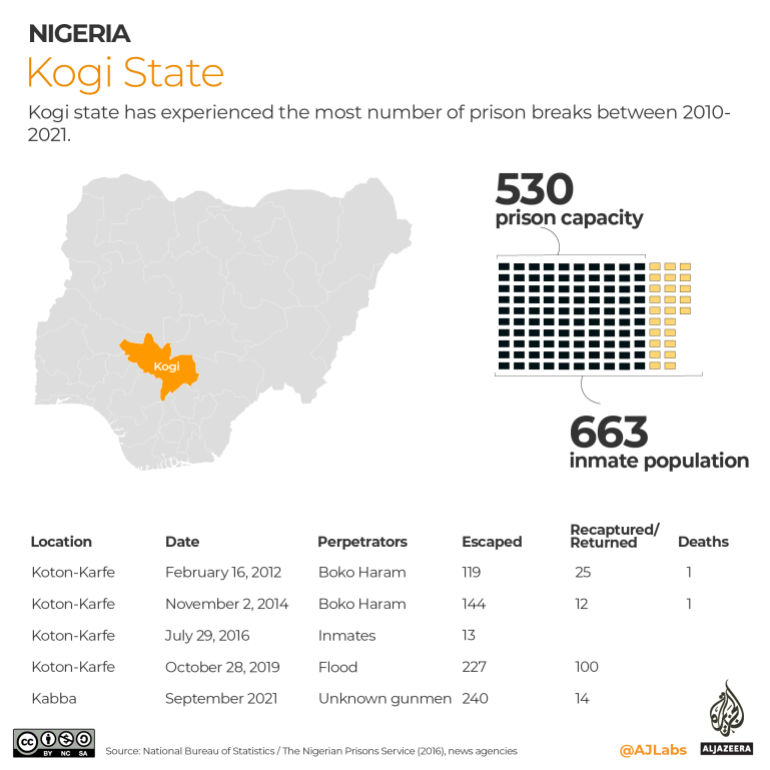 Agomoh said there is a correlation between the rise in prison attacks and the exponential increase in insecurity across Nigeria. “If there is a lot of conflict in the community, the chances of that flowing into the custodial and correctional centres becomes very high,” he added.

Besides Boko Haram’s 12-year armed campaign that continues to displace millions in northeastern Nigeria, other fighters and criminal gangs known locally as bandits have taken to kidnapping people of all religious affiliations, ethnic origins and economic status across the northwest and Middle Belt regions.

Lagos-based geopolitical advisory firm SBM Intelligence estimates that 2,371 people were kidnapped and approximately 10 billion naira ($25m) demanded cumulatively in ransom sums in Nigeria in the first half of this year alone. The Nigerian Communications Commission (NCC) has also directed the shutdown of telecom services in Katsina, Sokoto and Zamfara states at different times this year, in a bid to tackle banditry in those areas.

More recently, the Eastern Security Network (ESN), the paramilitary arm of the Indigenous People of Biafra (IPOB) whose secessionist agitation has become increasingly violent, has been mentioned as a possible perpetrator of prison attacks. “The southeast is unique in the jailbreaks recorded there,” said Oladisun Vera-cruz, security lead at Towntalk Solutions, a Lagos-based data intelligence firm. “Rather than inmates revolting and overpowering the correctional officers, the attacks have come from non-state armed groups who [also] target police stations and free prisoners.”

In 2021 alone, there have been at least 68 recorded cases of confrontations between IPOB and the police, said Vera-cruz. Forty-one of them were raids on police stations, where suspects are also sometimes routinely jailed for weeks on end. 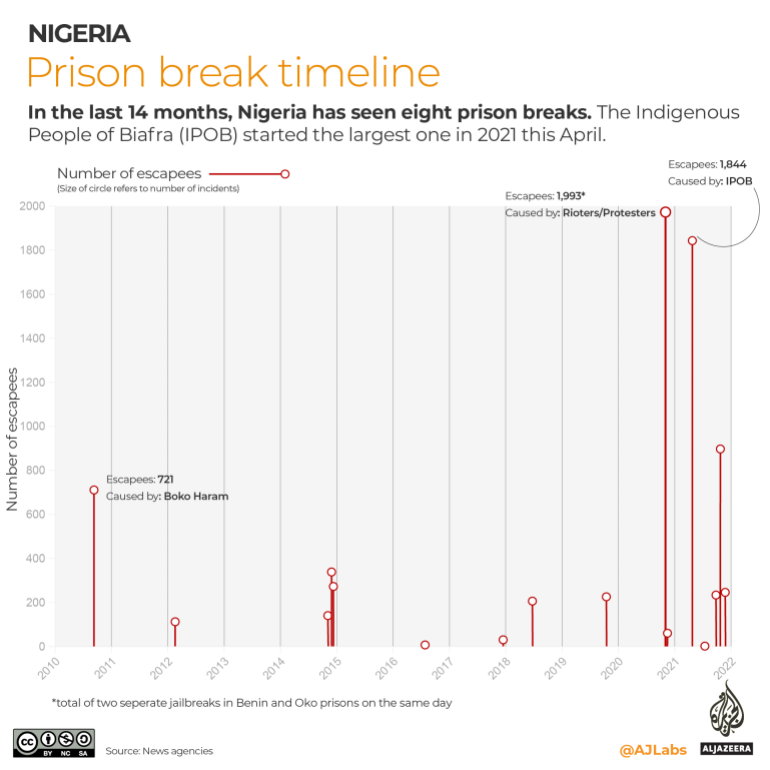 Two years ago, a three-part undercover exposé on the corruption and squalid conditions within the system went viral and put the authorities in a pillory. Fisayo Soyombo, a journalist with local newspaper The Cable, spent two weeks in detention, first at a police cell and subsequently at the Ikoyi jail.

His reports exposed the free flow of drugs in prison and rackets where warders collected as little as 10,000 naira ($24) to delete the jail records of released prisoners or anywhere between 20,000 and 500,000 naira ($48-$1,214) per night for special lodging within the prison.

Following the revelations, Aregbesola, the interior minister, ordered an investigation into the issues raised “to determine if what was reported was right or wrong” but there has not been an update from the ministry yet.

That silence continues to stir concerns about the presence of the needed willpower to implement reforms.

After signing the Nigeria Correctional Services Act in 2019, President Muhammadu Buhari had also urged the country’s chief justice to embark on speedy trials. But except for an immediate change in name from the Nigerian Prisons Service to NCS, there are no public signs that a decongestion process has begun. Specific recommendations in terms of fortification of the facilities to provide scanners, security cameras, and the integration of other technology, are also yet to be implemented.

NCS spokesman Francis Enobore did not respond to repeated requests from Al Jazeera for comment. In August, Attorney-General Abubakar Malami said 10,000 inmates have been freed in the past four years, through the work of a presidential committee on reforms.

Still, the justice system has a backlog to deal with. Courts were shut in the first few months of the continuing COVID-19 pandemic, crippling an overburdened judiciary that has already been struggling with deciding the fate of those “awaiting trial” which in some facilities, is as much as 90 percent of the total prison population.

Without knowing how long inmates will spend at a correctional or custodial centre, it becomes difficult for NCS officers “to plan proper rehabilitation and reintegration programmes,” noted Agomoh. And every prison attack will be an incentive for copycats to consider plotting such moves, she said. “If we don’t checkmate this, it will continue to happen.”