The Ethiopian government says its forces recaptured Shewa Robit, a town some 220km (135 miles) from the capital Addis Ababa, which was claimed last week by fighters from the northern Tigray region.

Government spokesman Legesse Tulu said on Wednesday Shewa Robit was among several small towns retaken by Ethiopia’s army and regional forces loyal to Prime Minister Abiy Ahmed, who last week announced he would head to the battlefield to lead a counteroffensive after the Tigrayan fighters threatened to march on Addis Ababa.

“In Shewa front, the Mezezo, Molale, Shewa Robit, Rasa and its surroundings have been freed from the terrorist TPLF,” Legesse said in comments broadcast on state media, referring to the Tigray People’s Liberation Front which has been locked in a war with Abiy’s government for more than a year.

The Ethiopian government said later on Wednesday that its forces had also recaptured the UNESCO World Heritage site Lalibela, which fell to Tigrayan fighters in August.

Pro-Abiy forces have “captured the historical town of Lalibela and Lalibela international airport,” the government communications service said in a statement. 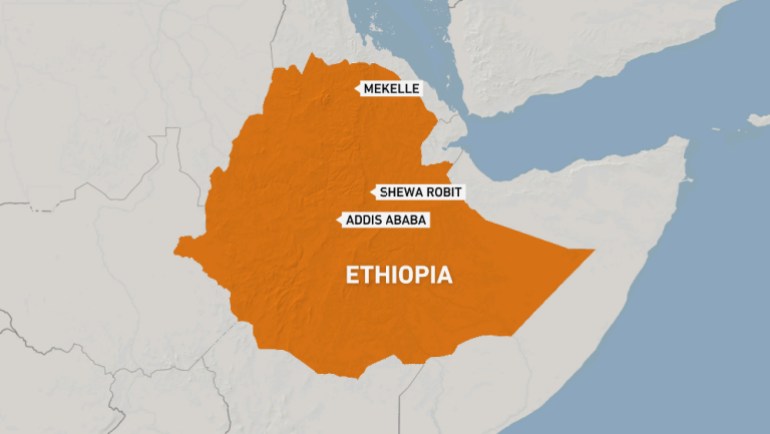 The brutal conflict took a sharp turn about a month ago when Tigrayan forces claimed to have captured the strategic towns of Dessie and Kombolcha, located on a key highway to Addis Ababa.

Legesse said the government would “in a short period of time” retake Dessie, even as fighting reportedly rages on at least three fronts.

There was no immediate comment by the Tigrayan forces.

In recent days, state media has broadcast images of a uniformed Abiy, who is a former military lieutenant colonel and the 2019 Nobel Peace Prize winner, in what appeared to be the northeastern region of Afar.

On Sunday, state media said the army controlled the lowland Afar town of Chifra, and Abiy said Tuesday such gains would be replicated in the Amhara region, where Dessie lies.

Much of northern Ethiopia is under a communications blackout and access for journalists is heavily restricted, making battlefield claims difficult to corroborate.  Al Jazeera, however, was able to gain exclusive access to Chifra, the first international news organisation to do so.

“The scenes we witnessed are appalling,” Al Jazeera Arabic’s correspondent Mohammed Taha Tewekel reported from the town on Sunday.

“Dead bodies everywhere on the streets … proof of the ferociousness of the fighting. There are clear signs of the lack of humanity in this conflict. The town’s commercial shops were totally destroyed, even the mosques were not spared. All the residents have fled for their lives.”

Fears of a Tigrayan forces’ march on Addis Ababa have prompted the United States, France, Britain and other countries to urge their citizens to leave Ethiopia as soon as possible as international mediation attempts have so far failed to yield any results.

Abiy’s government says their rivals’ gains are overstated and the capital is secure.

Meanwhile, Ethiopia’s foreign ministry on Wednesday tweeted images of a press briefing by China’s top diplomat Wang Yi during his visit to the country, quoting him as saying: “China stands against any interference in Ethiopia’s domestic affairs.”

Tens of thousands of people have been killed, millions displaced and hundreds of thousands have been driven to famine-like conditions, according to UN estimates, since fighting broke out in early November 2020.

In late November, government forces had seized Tigray’s capital, Mekelle, but by June, Tigrayan forces had retaken most of the region and pushed into the neighbouring Amhara and Afar regions.