Protests are under way for a second day in cities around the world as part of a global mobilisation against what campaigners say is a lack of urgency to address global warming at a crunch United Nations climate summit in Glasgow, Scotland.

From Paris to Sydney, Nairobi to Seoul, more than 200 events are planned worldwide on Saturday to demand immediate action for communities already affected by climate change, particularly in the poorer countries in the South.

In Glasgow, organisers and police said they expected up to 50,000 people to parade through the streets of the city near the COP26 summit venue, which is under tight security.

“The mood is mixed here,” Al Jazeera’s Andrew Simmons, reporting from Glasgow, said. “There is anger, there is some form of celebratory tactics to be used, and there is real concern particularly among the families who have joined the demonstrations.

“We’re seeing many children and families turning out, and the message primarily to the climate diplomats is one of you must stand accountable. We are halfway through COP26 right now, and the pressure has never been greater,” he added.

Delegates from nearly 200 countries are in Glasgow to hammer out how to meet the Paris Agreement goals of limiting temperature rises to between 1.5 and 2 degrees Celsius (34.7 to 35.6 Fahrenheit).

So far, some countries have signed up to pledges to reduce their greenhouse gas emissions, with separate deals on phasing out coal, ending foreign fossil fuel funding and slashing methane.

The promises followed a significant assessment that showed global carbon dioxide emissions were set to rebound in 2021 to pre-pandemic levels.

But campaigners have been left unimpressed by the summit, with prominent environmental activist Greta Thunberg calling it a “failure”.

“This is no longer a climate conference. This is now a global greenwashing festival.”

In Australia on Saturday, more than 1,000 protesters in Sydney and Melbourne – some dressed as lumps of coal or Prime Minister Scott Morrison, a vigorous defender of the mining industry – labelled the talks “a sham” and their national leader “an absolute embarrassment”.

“We’re all out here to show that we want more from our government,” Georgia, one of the protesters, told the Reuters news agency.

Melbourne’s protest was smaller than Sydney’s, with just a few hundred people turning out for a rally that also featured a giant koala emitting plumes of smoke and protesters dressed as skeletons on bikes.

Meanwhile, the South Korean capital of Seoul saw approximately 500 demonstrators take to the streets demanding immediate action for communities already hit by the fallout of a heating planet.

South Korea has few energy resources of its own and relies on imported coal – a cheap but dirty fuel – for about 40 percent of the electricity powering the world’s 12th-largest economy, according to figures from the International Energy Agency.

The country aims to be carbon neutral by 2050, but local activists say the goal cannot be accomplished without more fundamental changes.

“At COP26, the expected ‘blah blah blah’ is taking place,” Climate Strike, one of the organising groups of Saturday’s march in Seoul, said.

In Turkey, protesters called for more action to be taken to help save the planet for future generations.

“I want my children to live on a beautiful planet in the future,” said protester Kadriye Basut in Istanbul. “I think we owe that to our children and the planet,” she added.

University lecturer Baris Gencer Baykal, who also attended the demonstration, criticised the 2050 targets set by world leaders and called for an earlier end to the use of coal.

“It cannot be postponed any longer,” he said. “We want climate justice.”

COP26 negotiations continued on Saturday before taking a pause on Sunday ahead of what is shaping up to be a frantic week of shuttle diplomacy, as ministers arrive to push through hard-fought compromises on a number of issues.

Countries still need to flesh out how pledges made in the Paris deal will work in practice, including rules governing carbon markets, common reporting timeframes and transparency.

According to the UN, countries came into COP26 with national climate plans that, when brought together, put Earth on course to warm 2.7C (36.9F) this century.

With just 1.1C (34F) of warming so far, communities across the world are already facing ever more intense fire and drought, displacement and economic ruin wrought by global heating.

Brianna Fruean, a Samoan member of the Pacific Climate Warriors, who addressed a world leaders’ summit at the start of COP26, said it was time for leaders to take note of protesters’ demands.

“It can’t go on like this,” she said. “We refuse to be just victims to this crisis. We are not drowning, we are fighting and on Saturday the world will hear us.” 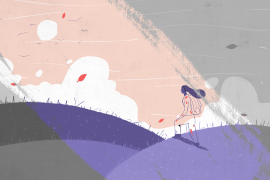 Plus, could the Valneva COVID vaccine be a game-changer in our fight against the coronavirus? 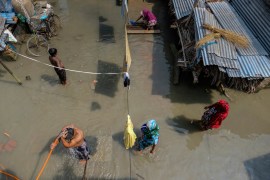 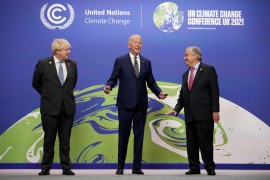