Prosecuting and defence attorneys have presented conflicting versions of the events that led to the death of Ahmaud Arbery in the US state of Georgia last year, as the long-awaited trial of the three men charged with killing the 25 year old opened on Friday.

In her opening statement, prosecutor Linda Dunikoski said the suspects had no reason to follow Arbery or to suspect him of wrongdoing when they chased him through their neighbourhood in Brunswick, a coastal community 480km (300 miles) southeast of Atlanta.

“They assumed that he must have committed some crime that day,” Dunikoski said. “He tried to run around their truck and get away from these strangers, total strangers, who had already told him that they would kill him. And then they killed him.”

Lawyers for the suspects – Gregory McMichael, 65, his son Travis McMichael, 35, and neighbour William “Roddie” Bryan, 52 – described Arbery, who was Black, as an “intruder”.

They argued that their clients – all three of whom are white – had probable cause to suspect that Arbery had committed a crime.

Robert Rubin, a lawyer for Travis McMichael, who shot Arbery three times, said his client was acting in self-defence as Arbery reached for his shotgun.

“He has no choice because if this guy gets his gun, he’s dead or his dad’s dead,” Rubin said.

A leaked video showing the killing of Arbery last year sparked outrage across the United States, fuelling the racial justice protests that rocked the country after the murder of George Floyd by a police officer of Minnesota.

Video footage of the incident was played in the courtroom on Friday.

Local prosecutors had initially declined to charge the suspects in the Arbery case. Months later, the Georgia Bureau of Investigation took over the probe after the video became public and arrested the defendants. They were charged with murder.

Bryan, a neighbour who joined the chase, had recorded the video of the incident.

Arbery had been seen entering a house under construction in the neighbourhood. The owner of the house says Arbery did not steal anything.

But the suspects followed him to stop him until the police arrived. At the time, Georgia had a law enabling citizens’ arrest; it was repealed after the killing of Arbery.

“It is a horrible, horrible video, and it’s tragic that Ahmaud Arbery lost his life,” said Rubin, the defence attorney. “But at that point, Travis McMichael is acting in self-defence. He did not want to encounter Ahmaud Arbery physically. He was only trying to stop him for the police.”

Dunikoskisaid said Arbery was an “avid runner”, noting that he was killed 3.2km (two miles) from his own home. She added that he was “under attack” by the suspects who had no evidence that he had done anything wrong.

“They made decisions in their driveways based on those assumptions that took a young man’s life, and that is why we are here,” Dunikoski said.

The makeup of the 12-member jury that will decide the outcome of the case was finalised on Wednesday, but it only included one Black person, drawing objections from the prosecution. 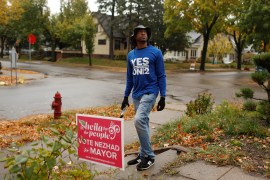 In wake of George Floyd, Minneapolis votes on replacing police

Voters in the city will decide whether to scrap the existing department and create a new Department of Public Safety. 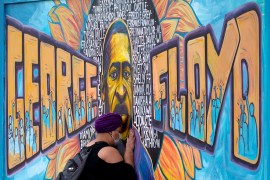 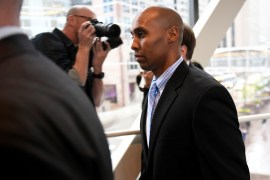 Mohamed Noor claims he feared for his safety and that of his police partner when he shot the unarmed woman.