Istanbul, Turkey – For months now Turkey’s leadership has promised to carry out a new military operation against Kurdish forces in northern Syria. But Ankara has found itself having to tiptoe around the presence of US and Russian forces there, confronting a Gordian knot that is likely to dampen its ambitions and delay any large scale offensive, analysts say.

“An operation is inevitable, but the timing will depend on diplomacy, rather than the military aspects in the area,” Omer Ozkizilcik, a researcher at the Ankara-based Foundation for Political, Economic and Social Research, told Al Jazeera.

Any Turkish action in the area, Ozkizilcik says, would likely draw a reaction from Russia, the United States, or both, who have a military presence in the areas Ankara would like to take from Kurdish forces.

Northern Syria is now a patchwork of sometimes overlapping military presences, and three Turkish incursions into the area have only further complicated what was already a well-choreographed dance that balanced Russian and American forces with the regime of Syrian President Bashar al-Assad, ISIL (ISIS), and Kurdish autonomous regions.

Turkey entered Syria in 2016 with thousands of troops and fighters from the Free Syrian Army, backed by armed drones and artillery, pushing out ISIL and Kurdish forces from the border town of Azaz to Jarablus in the east, on the bank of Euphrates River.

In 2018, Turkey and Turkish-backed Syrian fighters launched another operation, this time against Kurdish positions west of Azaz, taking control of the district of Afrin.

By 2019, Ankara said it intended to take the entire border east of the Euphrates as well, claiming that the United States-backed and largely Kurdish Syrian Democratic Forces (SDF) were working alongside the Peoples’ Protection Units (YPG) which Ankara said were tied to the outlawed Kurdistan Workers’ Party (PKK) and had put Turkish citizens across the border in danger by firing rockets and mortars into towns there.

Washington, which had spent hundreds of millions training and equipping the SDF – its main ally in fighting ISIL – initially tried to broker an agreement to have Kurdish fighters withdraw from the border, but that effort fell apart and in October 2019, Turkey launched its third operation, taking a new strip along the border from the town of Tal Abyad to Ras al-Ain.

US troops withdrew east, to an area near the Iraqi border, where its troops along with SDF remain today, guarding not only lucrative oilfields in the desert, but also tens of thousands of ISIL fighters and their families in sprawling detention camps. 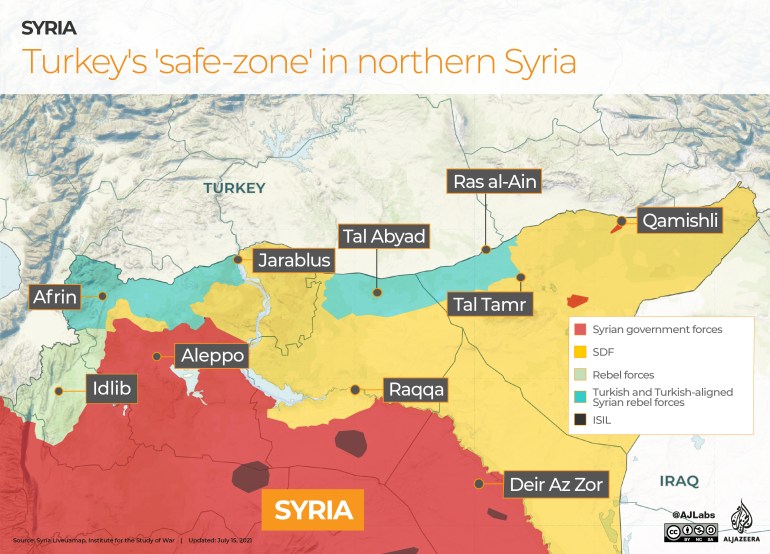 Since then, Turkish President Recep Tayyip Erdogan and Russian President Vladimir Putin have made a number of agreements aimed at alleviating Ankara’s concerns about the border.

Turkey built a chain of outposts around Idlib, the last largely rebel-held area southwest of Afrin, as a buffer with Russian and Syrian regime forces to the east.

Turkish and Russian forces conduct joint patrols in the area, and Russia, meanwhile, has pledged to disarm Kurdish fighters in a 30km (18.5 miles) strip across the entire Syrian border, most crucially in Kobane, a highly symbolic prize for Kurdish forces on the Turkish border, wedged between Turkish-controlled Jarablus and Tal Abyad.

But Ankara says Russia has not kept their side of the bargain, and that Kurdish forces, especially the YPG, continue to attack civilians and Turkish security forces in the area. Over the last few weeks, President Erdogan has repeatedly said Turkey would “do whatever it takes”, to remove all Kurdish threats along the border.

The remaining pockets of Kurdish-controlled areas in northern Syria pose a significant problem for Turkey and Syrian rebels, says Ozkizilcik. Ankara says YPG forces in Manbij and Tal Rifaat carry out regular shelling into Afrin, and while forces in Kobane lob rockets and mortars into Turkish villages across the border.

Ozkizilcik says Ankara has been prompted to take new action against the Kurdish forces because of those kinds of attacks, and especially a wave of car bombings that have killed civilians in Turkish-controlled areas. Some 192 car bombs attributed to the YPG since 2018 have killed 372 people and wounded 1,287 others, Ozkizilcik told Al Jazeera. Hospitals and bustling marketplaces in cities like Afrin have been hit, alongside Turkish and rebel patrols and checkpoints, all in an effort to create an impression the areas operating under the Turkish-backed Syrian Interim Government are not stable.

“The attacks show the YPG has adopted a strategy of disrupting areas of the Syrian Interim Government, and to crease chaos and disorder there,” Ozkizilcik said. “For long Turkey has argued the YPG is a terror organisation because of its links to the PKK, but these car bombs also show the actions of the YPG itself prove it is a terror organisation, and thus a legitimate target for a Turkish military operation.”

In the last few weeks, Turkey has moved hundreds of troops, armour, and firepower to boost its presence around Idlib, which, if Ankara fails to reach an understanding with Russia, could come under attack.

As in previous operations, Turkey is expected to rely heavily on a large force of Syrian rebels it has trained and equipped over the last few years. At least 20,000 fighters now follow a unified command structure under what is being called the Syrian National Army.

“The Syrian National Army is ready for the operation, and it will participate with its full military might if the situation requires it,” Mustafa Sejari, a spokesman for the group, told Al Jazeera.

The group is simply waiting for a green light from Turkey, Sejari said, and is prepared to deploy to any possible front against Kurdish forces in the area.

Turkey has long claimed it will not tolerate PKK-linked Kurdish forces along its 911km (566 miles)-long border with Syria, and in the long term, that means dividing up Kurdish-controlled areas to make it easier to bargain for it in any future settlement with the al-Assad regime, says Soner Cagaptay, director of the Turkish research programme at the Washington Institute for Near East Policy.

“The real reason for this operation is Turkish policy regarding Rojava or SDF-controlled areas,” he told Al Jazeera, referring to a name used to describe Kurdish-run autonomous zones in northern Syria.

“The goal is to turn this region into the political equivalent of Swiss cheese, to break it up into pieces so it is not contiguous and not sustainable, so that once a global settlement to the Syrian conflict is made, the Assad regime can digest it back under its authority.”

Both Moscow and Washington, however, stand in the way of any Turkish ambitions to take territory from Kurdish forces, Ozkizilcik says.

Tal Rifaat and Manbij, two Kurdish-controlled pockets from which attacks on Afrin are carried out, would mean negotiating with the Russian forces there now.

Another target could be Kobane, or an area just south of the city that would connect the Turkish-controlled enclaves of Jarablus and Tal Abyad, but that would require clearance from Russia as well.

Finally, Turkey could look to expand control east of Ras al-Ain, either stopping at Qamishli, where Russia uses an airbase and US soldiers carry out patrols, or going all the way east to the Iraqi border, where some 900 American troops are helping the SDF guard lucrative oilfields as well as tens of thousands of ISIL fighters and their families detained at the al-Hol camp.

Unlike in the past, Ankara should not expect Washington to ignore any missteps in the region that would jeopardise its ally SDF, says James Jeffrey, a former US ambassador to Turkey and Iraq and adviser for the Trump administration on its engagement in Syria.

Turkey’s 2019 operation that took the SDF areas between Tal Abyad and Ras al-Ain were met with hostility in Washington, with American lawmakers calling for Erdogan to be punished.

Then-US President Donald Trump shocked many in Washington by withdrawing troops from the area and allowing Turkey to sweep in, opening the door to what critics said would be the ethnic cleansing of Kurdish allies there, while also jeopardising the war against ISIL.

Trump later reversed his decision – redeploying troops to the east of Qamishli, and imposing sanctions on Turkey until an agreement was made to disarm Kurdish forces in exchange for a ceasefire from Turkey. Each year since then, the Biden administration has told Congress it continues to support the SDF, and it would take action against Turkey if it attacked its Kurdish ally.

The Biden administration, Jeffrey says, is far less likely than Trump to ignore any new Turkish operation that includes attacks on the SDF.

“Anything at all like the October 2019 attack on the SDF in the northeast, would first of all be an explicit violation of the October 17 agreement between the US and Turkey for a ceasefire,” Jeffrey told Al Jazeera.

“I cannot imagine the Biden administration acting less aggressively than the Trump administration did, which imposed immediate and crushing sanctions [on Turkey]. Given the vulnerability of the Turkish economy, which is at an even worse stage than it was two years ago, that would have quite an impact.”

Beyond sanctions, angering the US would also jeopardise Ankara’s effort to buy F-16 jets and upgrade kits, hardware it desperately needs to maintain military pressure in the region. American lawmakers have already repeatedly written to the Biden administration asking to block F-16 sales to Turkey because of its purchase of the Russian S-400 missile defence system.

“If there is an incursion, then the doors to even the possibility that Congress would approve F-16 sales would almost be completely shut,” Cagaptay said.

An attack on Tal Rifaat though, would likely not draw American ire, Jeffrey says, because it is dominated by the YPG, which Washington has insisted are a separate entity from its ally, the SDF.

While the city of Kobane itself would probably spark an urban battle Turkey is likely to avoid, a deal with Russia to skirt it and link Turkish-controlled Jarablus and Tal Abyad is a likely possibility, Jeffrey said.

Russia would likely want something in return, most probably areas along the M4 highway southeast of Idlib. Any deal with Russia that cedes more land to Turkey would be an uphill battle though if past negotiations with them are any indication, Jeffrey said.

“In my conversations with the Russians – I won’t go into details – but you can trust me, they are very, very authoritative, and indicated they do not want more Turkish encroachment on Syrian territory, and I know Assad is also ferociously against it.”