A new COVID-19 variant detected in South Africa with a high number of mutations has raised concerns among scientists and triggered travel restrictions by a number of countries amid fears of coronavirus transmissions.

The National Institute for Communicable Diseases (NICD) said 22 positive cases of the new variant have been recorded in the country following genomic sequencing. News of the announcement broke on Thursday.

South Africa Health Minister Joe Phaahla said the variant was behind an “exponential” increase in reported cases, making it “a major threat”.

What do we know about the new variant?

In a statement on Friday, the WHO designated the new coronavirus strain as a “variant of concern,” naming it “omicron” after a letter in the Greek alphabet.

Also called B.1.1.529, the variant has a very unusual constellation of mutations, which are worrying because they could help it evade the body’s immune response and make it more transmissible, scientists have said.

South African scientists have detected more than 30 mutations to the spike protein, the part of the virus that helps to create an entry point for the coronavirus to infect human cells.

Lawrence Young, a virologist at the University of Warwick, described omicron as “the most heavily mutated version of the virus we have seen,” including potentially worrying changes never before seen all in the same virus.

Tulio de Oliveira, director of the KwaZulu-Natal Research and Innovation Sequencing Platform, said the variant has baffled experts. “It has a big jump in evolution, many more mutations than we expected,” de Oliveira said.

In comparison, the Beta and Delta variant respectively have three and two mutations. The latter originated in India and caused the devastating second wave last year.

“The one piece of good news is that it can be detected by a PCR test,” de Oliveira added.

Are COVID-19 vaccines effective against the new variant?

Scientists know that omicron is genetically distinct from previous variants including the Beta and Delta variants, but do not know if these genetic changes make it any more transmissible or dangerous. So far, there is no indication the variant causes more severe disease.

Maria Van Kerkhove, the head of Emerging Diseases and Zoonosis at WHO, said on Thursday that “the concern is that when you have so many mutations, it can have an impact on how the virus behaves”.

“It will take a few weeks for us to understand what impact this variant has on any potential vaccines,” Van Kerkhove added.

Any new variant that is able to evade vaccines or spread faster than the now-dominant Delta variant might pose a significant threat as the world emerges from the pandemic.

“[Currently] we are trying to identify how widely spread this is. There will be a lot of work looking at: Is it more transmissible? Is it associated with any more severity of disease? Does it render the vaccines less effective?” Rees told Al Jazeera.

“In the meantime, our big request to the world, in terms of vaccinating the African region, is please get the vaccines out into the region because as we know variants don’t stay in one country,” she added.

The variant has spread rapidly through the Gauteng province of South Africa, home to the economic hub Johannesburg and the capital Pretoria.

In response, the United Kingdom has banned all travel from South Africa and five other southern African nations, namely Botwsana, Eswatini, Lesotho, Namibia and Zimbabwe starting at noon local time on Friday.

Israel also announced on Thursday it was barring its citizens from travelling to South Africa. It also included Lesotho, Botswana, Zimbabwe, Mozambique, Namibia and Eswatini to its highest-risk travel list.

European Union nations also moved quickly on Friday to ban air travel from southern Africa, and the United States also said it would ban travel from South Africa and seven other African nations by non-US citizens beginning on Monday.

The number of daily infections in Africa’s hardest-hit country has increased 10-fold since the start of the month.

The NICD said the number of detected cases and the percentage testing positive are “increasing quickly” in three of the country’s provinces, including Gauteng.

The NICD did not attribute the latest resurgence to the new variant, although some scientists suspect it may be the cause.

The country’s daily number of infections hit 1,200 on Wednesday, up from 106 earlier in the month.

Before the detection of the new variant, authorities had predicted a fourth wave to hit South Africa ahead of the festive season, starting about the middle of December.

South Africa has the highest pandemic numbers in Africa with approximately 2.95 million cases, of which 89,657 have been fatal.

Last year, the Beta variant of the virus first emerged in South Africa, although until now its infection numbers have been driven by Delta.

Approximately 41 percent of adults in South Africa have received at least one dose, while 35 percent are fully vaccinated. Those numbers are far above the continental average of 6.6 percent of people vaccinated. 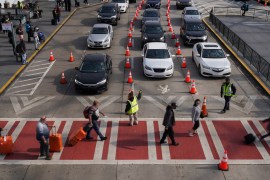 The Americas marked a 23 percent jump in cases last week, though most cases were recorded in the US and Canada. 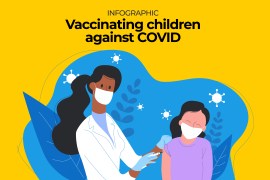 More than 100 countries around the world are vaccinating children against COVID-19. 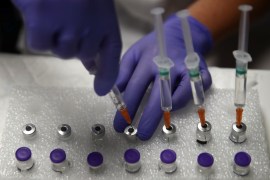 ‘False sense of security’ around COVID vaccines: WHO

WHO chief says many vaccinated people wrongly think they no longer need to take other precautions against COVID.