The motion on Thursday, which was supported by the party of narrowly defeated right-wing presidential candidate Keiko Fujimori, cited “moral inability” to govern. It has the signatures of 28 legislators.

It will need 52 votes from the 130-seat body to begin impeachment proceedings. A vote is not yet scheduled. A final vote to remove Castillo would eventually require 87 votes.

Castillo, who was elected president in July, dismissed the move on Thursday.

“I am not worried about the political noise because the people have chosen me, not the mafias or the corrupt,” he said during a speech in the Andean region of Jauja, without specifically naming the impeachment effort. “I’m calm.”

Castillo has seen his support wane in recent months, even from his left-wing Free Peru party, amid a series of protests in communities that say they have not seen the economic benefits of the country’s recent development and mining booms.

Several scandals have also plagued Castillo’s key ministers and advisers. An anti-corruption prosecutor’s office recently launched an investigation into a key presidential adviser, Bruno Pacheco, and found $20,000 in the toilet of his government office in a raid. Pacheco, who denies wrongdoing, resigned last week.

Still, hundreds of Castillo supporters marched outside Congress in Lima on Thursday to protest against the impeachment effort.

“The right [in Congress] is not allowing to govern, and that is just the reason for us to go out and protest strongly. This is only a start because we will achieve our purpose, to close that Congress of obstructors,” Pedro Lino, a Castillo supporter from Huancavelica, told The Associated Press news agency.

Peru’s Congress, which generally leans to the right, has a history of controversial impeachments.

Despite a presidential term lasting five years, the Latin American country has had five presidents since 2016. 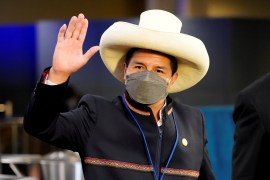 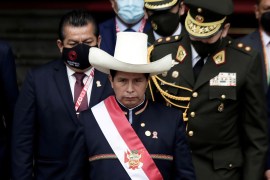 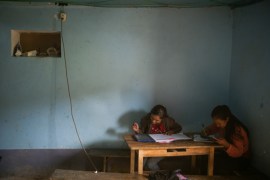 As Peru opens from pandemic, nearly all schools remain closed

Amid high rates of poverty, lack of in-person learning is having a devastating effect on families.