Dhaka, Bangladesh – Supporters of Bangladesh’s main opposition party have organised protests across the country demanding that their jailed leader be immediately allowed to go abroad for treatment.

Khaleda Zia, the 76-year-old leader of the Bangladesh Nationalist Party (BNP) and the main rival of Prime Minister Sheikh Hasina, has been serving a 10-year jail term for corruption.

She has been barred by the court from travelling abroad after she was convicted on corruption charges three years ago – a conviction the BNP says was politically motivated.

The opposition leader was admitted to the critical care unit of a private hospital in the capital Dhaka early this month after her health condition “significantly worsened”.

Zia, a three-time prime minister of the South Asian nation, is suffering from liver disease, chronic kidney disease and a heart ailment in addition to her existing conditions of rheumatoid arthritis and diabetes, according to her personal physician Dr AZM Zahid Hossain.

Thousands of opposition activists have staged multiple demonstrations, rallies and hunger strikes to press home their demands, with Secretary-General Alamgir warning of waging a campaign seeking the fall of the Hasina led-government if Zia is not allowed to travel.

The government has directed the police to remain on “red alert” across the country so that no individuals can create “chaos and unwanted situation”.

‘The law will decide’

Prime Minister Hasina seemed unmoved by the demands, saying that the law of the land would decide whether Zia would be allowed to go abroad.

“I have done whatever I can for Khaleda Zia,” Hasina said, adding that using her power, she has allowed Zia to serve her sentence at home instead of jail and receive the required treatment within the country.

Following the outbreak of COVID-19, the government in March last year granted Zia temporary release from jail at the request of her family. But she still cannot leave Bangladesh.

Law Minister Anisul Huq said the government does not lack compassion for Zia.

“We understand the sentiment of her [BNP] party people and we are genuinely thinking of taking a decision about her treatment abroad. But we have to find out whether legal recourse allows such action,” he told Al Jazeera.

They have been referred to as the “Battling Begums” (Begum is a South Asian term that refers to a Muslim woman of high rank) due to their vicious political rivalry, as they alternated power with metronomic regularity since 1991 when the Zia-led BNP came to power following the first elections after nearly a decade of military rule.

The AL has not lost an election since coming to power in 2008. Subsequent elections, however, have been marred by opposition boycotts and accusations of widespread vote-rigging.

“She [Zia] was convicted in a kangaroo court and now they say she can’t be allowed to go abroad for treatment as there are legal barriers. This is just a joke.”

He claimed that many senior Awami League leaders are in favour of allowing Zia to travel for treatment, “but they are genuinely afraid of Hasina’s vengeance and will not say a word in public”. 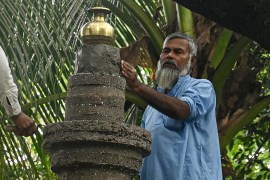 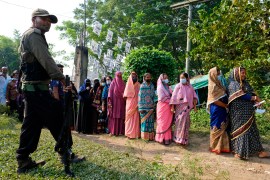 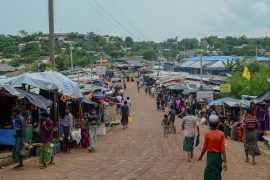 Rohingya in Bangladesh camps fear both the police and ARSA

Refugees say they are caught in the middle of alleged police ‘atrocities’ and violence by an armed community group.