Lesbos, Greece – If there is one thing three months in a Greek prison cell did not take from Seán Binder, it is his sense of humour.

He kept a plastic two-euro coin from his time in jail, which he produces with a coy smile.

“I can buy exactly two spinach pies the moment I go back to prison – and spinach pies are perhaps my favourite thing about Greece,” jokes the 27-year-old, who is studying law in London.

Unlike other students his age, Binder, a German citizen raised in Ireland, is facing charges in Greece of people smuggling, being part of a criminal organisation, espionage and money laundering related to his time working with refugees on the island of Lesbos, all of which could carry a prison sentence of up to 25 years.

Binder was arrested in 2018 along with Sarah Mardini, 26, who arrived on Lesbos as a Syrian refugee in 2015 and returned to volunteer, in a case rights groups have decried as “baseless.”

The two spent more than 100 days in pre-trial detention in Greece. “One hundred and six”, to be precise, said Binder, sitting in a cafe in a Lesbos harbour.

In the distance is a new refugee camp, built in the wake of the fire that razed the infamous Moria camp to the ground last year.

The island’s geographical position as an external European border was why Binder, a certified rescue diver, travelled to Lesbos.

“It seemed that as a German or Irish person, what happens at our borders, relates to me and it happens in my name. So I have some reason and responsibility for being involved in a response to the loss of life at sea,” he said.

Last Thursday, Binder sat in a Lesbos courthouse as the long-awaited trial against him opened. It was later adjourned and will be moved to a higher court at a later date; the Lesbos court decided it did not have jurisdiction because one defendant is a Greek lawyer.

Reporters were prohibited from entering the courthouse. The reason given by officials was “COVID, referring to physical distancing measures.

Three years have passed since Binder was last on the island.

After the adjournment, defendants and their families cried and embraced one another.

Binder said the wait is “super expensive” and has had an impact on his emotional wellbeing and professional life, but he remains clear-eyed. According to him and many observers, they are being used by Greece as an example.

“It’s the chill factor itself,” he said of the continued delays to the trial.“And the limbo dissuades others from participating in necessary and legally required search and rescue.”

Binder was arrested in August 2018 alongside Mardini, who at the time was leaving the island to resume her studies in Berlin.

Mardini, a Syrian competitive swimmer who was earlier hailed as a hero for saving refugees in peril at sea, is now banned from entering Greece and lives in Germany, where she has asylum.

“Sarah and I were handcuffed together at that moment and taken to the courthouse where these very heinous crimes were levelled against us,” said Binder.

When he speaks about his time in jail in the eastern Aegean, his voice lowers and his affable smile disappears.

“You’re supposedly innocent until proven guilty, but what that means in practice is that I was handcuffed to a guy who had murdered two people. I was in a cell with 17 convicted felons.”

Binder, Mardini and Nassos Karakitsos, 40, another member of the ERCI (Emergency Response Center International) NGO the trio worked for, were finally released in early December 2018.

“We were so lucky to have so much support from the public,” said Binder and credits public outrage as part of the reason they were released.

‘No evidence of wrongdoing’

Amnesty International and Human Rights Watch (HRW) are among the high-profile organisations calling for the charges to be dropped.

HRW says the 86-page police investigation file had “blatant factual errors”, including claims that some of the accused participated in rescue missions on multiple dates when they were not in Greece.

Greek authorities allege that the activists monitored Greek Coast Guard radio channels and used a Jeep with fake military plates – but the defendants’ lawyers have pointed out inconsistencies and inaccuracies.

The charges for espionage relate to the defendants communicating on an “encrypted messaging service”: the popular communication app, WhatsApp.

In spite of the doggedness of Greek authorities in pursuing the case, it is clear that the defendants have large pockets of support across Europe. Protests in solidarity took place from Athens to Brussels last week and an open letter, signed by more than 70 MEPs, was sent to the European Commission.

“The only way that justice can be served is for the charges to be dropped,” said Irish MEP Grace O’Sullivan who has been leading the campaign in the European Parliament.

Binder is indignant and especially angry that Mardini continues to be barred from entering Greece to attend her own trial as a “threat to national security”.

“I face the verbatim charges. How am I not a threat to national security?” he questioned. “It’s because she is Syrian.”

Before he leaves the interview, he wants to emphasise a point about the criminalisation of humanitarians in Europe.

“I think that the most shocking thing about what our trial represents isn’t so much about me as an individual or us as a group but rather the risk to all of us, to anyone,” he said.

“When you step back and realise there is no evidence of wrongdoing – the obvious implication is that it can happen to anybody who is doing the right thing.” 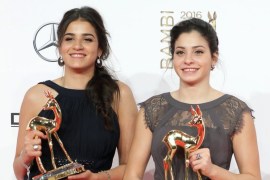 A group of aid workers is on trial in Greece, accused of spying, among other charges. 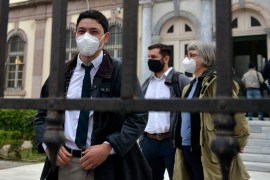 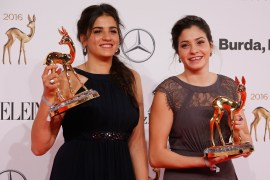 Volunteers who worked on Lesbos, including Sarah Mardini, face spying charges that could see them jailed for years.