St. Cuthbert’s Mission/Pakuri, Guyana – In a small forest clearing, Leeland Clenkian swings his axe into the decaying wood of an ite palm tree and plucks out a squirming tacoma worm.

The tacoma, which Clenkian tosses into a plastic bowl, is a delicacy in this Indigenous Arawak community of about 2,000 residents, located two hours by road from the rapidly developing city of Georgetown, Guyana’s capital.

“They are buttery, high in protein and can be cooked without the need for oil,” Clenkian, a 73-year-old retired Arawak chief and military veteran, told Al Jazeera. “It’s very versatile, very tasty – finger-licking good.”

Eaten raw, sauteed, or skewered and roasted like marshmallows on an open fire, insects like this could help make food systems worldwide more sustainable, Clenkian said. As he spoke, a group of apprehensive visitors from the city tasted tacoma fried with onions.

With the world’s population set to eclipse nine billion by 2050, and as climate-changing emissions from livestock continue to rise, experts say diets must shift to ensure a sustainable future – and insects could play more than a bite-sized role.

Globally, the livestock industry is responsible for about 15 percent of all human-caused carbon emissions, according to the United Nations Food and Agriculture Organization (FAO).

Insects are about eight times better for the planet than beef when it comes to greenhouse gas emissions, said Arnold van Huis, a professor emeritus of tropical entomology at Wageningen University in the Netherlands. He has spent much of his professional life studying the role of insects in food systems.

“I think everybody realises we need to change our diets,” van Huis, an aficionado of spicy deep-fried locusts, told Al Jazeera. “I think it’s safer to eat insects than chicken. Insects are taxonomically much further from humans than chickens or pigs.” Diseases carried by livestock, such as mad cow, are generally more dangerous to people than anything contained in insects, he added.

Producing one kilogramme (2.2 pounds) of beef requires about 25kg (55lbs) of feed, van Huis said, while one kilogramme of protein-rich crickets requires 2kg (4.4lbs) of food. Insects are cold-blooded, so unlike cows, they do not expend energy on producing body heat. Livestock also requires about six times more water than what an equivalent amount of insects would need, he said.

“About 80 percent of agricultural land in the world is already used for livestock,” he added. “We have to change.”

In much of the Global South, eating insects is nothing new or exotic. Some two billion people worldwide savour insects in their regular meals, with approximately 1,900 edible species, according to the FAO.

There are spicy scorpions as street food in parts of China; fried termites in western Kenya; curried dragonflies in Indonesia; beetle larvae in parts of Cameroon; wok-fried tarantulas or silkworms in Cambodia; and sauce-drenched mopane worms in rural Zimbabwe.

In Mexico, crispy grasshoppers are served with lime and chilli – and of course the humble tequila worm to chase down a strong shot.

In Niger, grasshoppers collected in millet fields fetched a higher price in local markets than the actual millet, according to a 2003 study (PDF).

In Guyanese Indigenous communities such as the Pakuri, the tacoma worm “isn’t an everyday delicacy”, said Michael Patterson, an Indigenous chef specialising in traditional foods who runs a catering company in Georgetown.

Setting a tree – chopping it down, making the correct incisions and waiting for the bugs to grow in the decaying wood – takes several weeks, and this cannot be done too often without damaging the forest, he said.

Tacoma worms are normally prepared during cultural activities or festivals, Patterson told Al Jazeera. Their consumption, he said, “comes back to the whole basic survival mode of human beings. Mankind started with the soil; it’s back to those basic principles”.

To some consumers, however, eating insects is not just gross; it is part of a dark, humiliating future. The opening scene of the dystopian sci-fi film Blade Runner 2049 shows the main character entering a protein farm, where a worker in a hazmat suit grows insect larvae in a toxic-looking vat of brown sludge.

Van Huis traces the western cultural aversion to insect consumption to environmental factors. Insects tend to be larger, easier to harvest and available all year round in much of the tropics, compared with the smaller bugs in much of the western world, which cannot be accessed in the winter.

Even in countries where insects have traditionally been eaten, changing dietary preferences mean that some middle-class consumers are now shunning them, van Huis said, as they are “associated with the poor man’s diet”.

For people who are not comfortable eating them directly, insects still have a role to play in addressing climate change and making agriculture more sustainable, said Renata Clarke, a Barbados-based researcher with the FAO. She’s working on a project to make it easier for small farmers to produce insects, mainly mealworms and black soldier flies, to feed chickens and pigs.

“Using insects as a feed source is a lot less costly for the environment than traditional feeds,” Clarke told Al Jazeera in a phone interview. “It’s also less likely to evoke the ‘yuk’ factor than people directly consuming them. Who knows; maybe it’s a pathway to thinking differently about insects?”

About 17 percent of the world’s food is wasted, according to a recent FAO report. Leveraging some of that refuse as a food source for insects, which could then be fed to livestock, would be a win-win for local farmers and the environment, Clarke said.

Many countries in the Caribbean import 80 percent of their animal feed, and supply chain disruptions related to the COVID pandemic – coupled with recent price increases – have made insects more palatable as a source of animal feed, she added.

Having local farmers produce the insects, rather than importing feed from “monopolistic” traders, could also strengthen local economies, she said.

Back in Pakuri, Leeland Clenkian and the current chief, Timothy Andrews, hope the tacoma worm can one day be an export for their community – or at least a potential draw for tourists looking to try something new.

They are working on building an ecotourism project where day-trippers from the capital or foreign tourists can go for a swim in the river, watch colourful birds, take a hike in the forest or try the tacoma worm.

“I’ve heard insects are becoming a delicacy in Southeast Asia,” Clenkian said. “So the tacoma has a good chance of having a worldwide taste.” 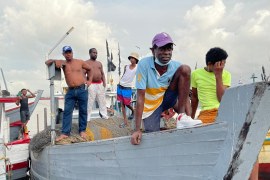 With oil boom, Guyana walks a tightrope on growth and climate

‘It’s like going into the telegraph business now when we are talking about 5G cellular,’ says one economist. 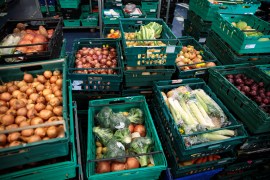 ‘Big Food’ at the UN table: A recipe for big waste? 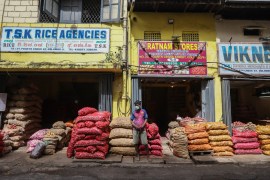 As food and energy prices soar, Sri Lankans go without 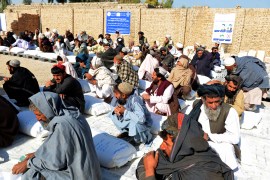 UN food agency: 45 million people on the edge of famine

UN food agency says 45 million people marching towards the brink of starvation, up from 42 million earlier in the year.