Twelve cabinet ministers have submitted their resignation to newly reinstated Sudanese Prime Minister Abdalla Hamdok in protest against a political deal between the prime minister and the country’s ruling military council.

On Sunday, Hamdok was reinstated after signing a political agreement with the head of the military council, General Abdel Fattah al-Burhan, to end a weeks-long crisis that threatened to undermine the country’s political transition.

While the deal was largely welcomed by the international community, Sudanese pro-democracy activists have rejected it as an “attempt to legitimise the coup”. They demand that the military should not be part of any future Sudanese government.

The resigned ministers were part of a transitional government led by Hamdok that was dissolved on October 25 by al-Burhan. The military’s move sparked nationwide protests during which at least 41 people were killed in a security crackdown.

Those who resigned include the ministers of foreign affairs, justice, agriculture, irrigation, investment and energy, according to a statement issued by the ministers. The ministers of higher education, labour, transport, health, youth and religious affairs also tendered their resignation.

The statement said the five ministers were members of the Forces of Freedom and Change (FFC) coalition, which had shared power with the military before last month’s military takeover, were unable to attend Monday’s cabinet meeting.

Al-Burhan declared a state of emergency and dismissed the transitional government on October 25, amid rival protests and accusations between the military and politicians.

The transitional government comprising of civilians and military figures was formed after a power-sharing deal agreed after the popular overthrow of longtime ruler Omar al-Bashir in 2019.

The 14-point deal between Hamdok and the military also provides for the release of all political prisoners detained during the coup and stipulates that a 2019 constitutional declaration be the basis for a political transition, according to details read out on state television.

Hamdok, who had been under house arrest since the last month’s coup, said in an exclusive interview with Al Jazeera that he signed the agreement as he is driven by the “responsibilities” placed on his shoulders.

“I have made up my mind and signed this political agreement, although I know that many may disagree, object, or reject it simply because the people’s ambitions and aspirations were much higher,” he said. 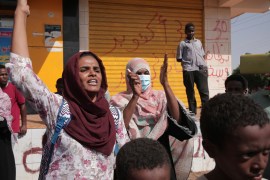 US secretary of state welcomes Sudan deal, calls for release of political detainees and lifting of state of emergency. 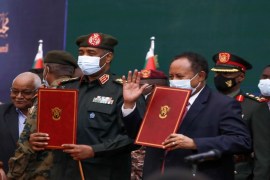 Will the agreement in Sudan hold this time?

Sudan’s prime minister is reinstated after an agreement with the military, which had previously deposed him.