The Kremlin has said it is alarmed by a Western push to supply Ukraine with high-tech weapons that it claims are being used by Kyiv to provoke Moscow.

Kremlin spokesman Dmitry Peskov’s comments on Monday come amid weeks of escalating tensions between Russia and Ukraine, with both sides accusing one another of mobilising military units along their shared border.

“The number of provocations is growing and growing significantly. What’s more, these provocations are being carried out with weapons being supplied by NATO countries,” he said, citing the United States-headed transatlantic security alliance. “And we are observing this with great alarm.”

Several NATO member states, including the US and United Kingdom, supply weapons to Kyiv and the alliance as a whole has said it is committed to protecting Ukraine’s territorial integrity in the face of any possible Russian aggression. The alliance was yet to comment on the Kremlin’s latest claims.

For its part, Kyiv fears Moscow might be preparing an attack.

US and NATO officials have been making similar statements for nearly two weeks, referring to what they say are unusual Russian troop movements in the border region.

The head of Ukraine’s military intelligence told the Military Times outlet this weekend that Russia had more than 92,000 soldiers amassed around Ukrainian borders and is preparing for an attack at the end of January or beginning of February.

Kyrylo Budanov said such an offensive would likely involve air raids, artillery and armoured attacks followed by airborne assaults in the east, amphibious assaults in Odesa and Mariupol and a smaller incursion through neighbouring Belarus.

But Moscow, which had massed troops along Russia’s border with Ukraine earlier this year, has repeatedly dismissed such suggestions as inflammatory and complained about what it has said is increasing activity in the region by NATO.

Peskov on Sunday dismissed as “hysteria” recent claims by officials in Washington alleging that Russia is poised to launch an attack on its neighbour, suggesting Moscow was being targeted in a disinformation campaign.

“This hysteria is being artificially whipped up,” he said in comments broadcast on state TV, suggesting it was not “logical or polite”.

“We are being accused of some kind of unusual military activity on our territory by those who have brought in their armed forces from across the ocean. That is, the United States of America.”

The Kremlin spokesman said “a provocation” in the area could not be ruled out given the US’s rhetoric. He also suggested Kyiv, which is battling separatist rebels in the country’s east, was probably looking for a way to solve its own problems by force.

Moscow annexed Ukraine’s Crimean Peninsula in 2014 and the Russian-backed separatists seized a swath of eastern Ukraine, in regions bordering Russia, that same year.

Ukraine and its Western allies have accused Russia of sending troops and arms across the border to support the rebel forces in the Donbas. Moscow has denied those claims.

Russia wants NATO to stop “concentrating a military fist” near its borders and to stop arming Ukraine with modern weapons, Peskov said.

The Kremlin warned in September that NATO would cross a Russian red line if its military infrastructure expanded in Ukraine.

Ukraine, which has been striving to become a NATO member, received a large consignment of US ammunition earlier this year and Javelin anti-tank missiles, prompting criticism from Moscow.

Kyiv said it is upgrading its combat capabilities to defend itself against new possible Russian aggression. 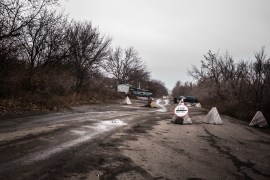 Conflict continues to blight the lives of civilians still living on the front lines in Ukraine’s Donbas region. 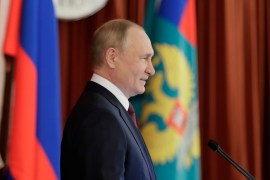 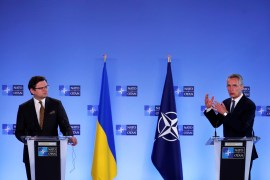