Venezuelan President Nicolas Maduro’s United Socialist Party of Venezuela and its allies have won big in regional elections participated by the opposition for the first time in four years.

Sunday’s vote for governors and mayors across the South American country, which was overseen by European Union observers, was widely seen as a political weather vane for a country that has experienced years of economic crisis worsened by crippling international sanctions.

Maduro said the victories, which saw his allies win 20 of 23 governor posts, as well as the mayorship of the capital Caracas, “must be celebrated”.

“The victory is impressive,” he said.

The elections drew a voter turnout of 41.8 percent, with 8.1 out of a possible 21 million voters casting a ballot, according to the National Electoral Council (CNE).

It was particularly significant as it saw the return of opposition parties that had boycotted elections in the country since 2018 amid allegations of fraud and intimidation by violent gangs loyal to Maduro.

Many of those parties hesitantly returned to the ballot after a raft of government concessions, including allowing observers from the EU, and amid frustration that a multi-year international sanctions campaign had failed to dislodge Maduro from power.

Meanwhile, the EU mission is set to present a report on the elections on Tuesday.

The three governor posts won by the opposition, however, include oil-rich Zulia, the most populated region in the country whose capital Maracaibo is Venezuela’s second-largest city.

The head of the 130-member EU observer mission, Isabel Santos, said on Sunday that the election was proceeding “calmly”, while the CNE said only “small and isolated problems” were registered during the course of voting.

Still, opposition figure Henrique Capriles accused the Maduro government of ordering some polling stations to stay open beyond the 6pm (22:00 GMT) closing time, even when there were no voters waiting in line.

“They are going to put votes that do not exist,” he tweeted.

Sunday’s vote represents a major setback for the opposition, which hoped it would raise their profile ahead of presidential elections set for 2024.

The beleaguered opposition had been plagued by disunity and questions over whether some candidates were actually government plants meant to split their supporters.

Tomas Guanipa, the opposition candidate for the mayor of Caracas, said the results showed “we must rethink our strategy so far”.

“What is undeniable is that the vast majority of this country wants change, and that is why we have to fight.”

The polls – and the government concession that preceded on Sunday – come as Maduro has sought to build goodwill with the international community in hopes of sanctions relief, as well as the unfreezing of foreign funds and being able to again sell its oil to several wealthy nations.

The country is currently experiencing its eighth year of recession in a row, with hyperinflation reaching nearly 3,000 percent in 2020.

A recent study found that three in four Venezuelans live in extreme poverty, with the economic crisis made worse by the coronavirus pandemic.

Still, on Saturday, Maduro, who became president in 2013, said international observers had no authority to give a “verdict” on how the regional elections were conducted, saying they “must respect the laws of Venezuela, and must strictly respect the regulations of the electoral power that invited them”.

The US is among dozens of countries that have not recognised Maduro’s presidency since the controversial 2018 national elections, which opposition leader Juan Guaido claimed to have won.

Prior to Sunday’s vote, Guaido called on the opposition to “unify the struggle” adding that “it is certain that Maduro is, and will continue to be, illegitimate”. 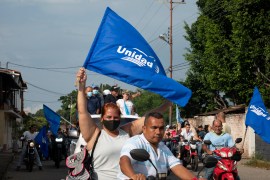 Opposition will contest elections on Sunday, to be monitored by the EU observers, for the first time in four years. 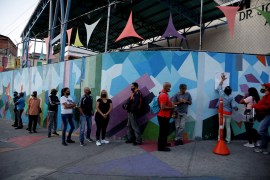 The polls mark the first time in four years that the main opposition parties will participate in an election. 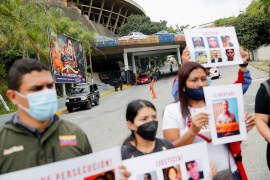 ICC to investigate possible crimes against humanity in Venezuela

President Nicolas Maduro says Venezuelan government respects ICC decision to open probe, but ‘we do not share it’.