A political agreement has been signed in Sudan enabling Abdalla Hamdok to be reinstated as prime minister.

Sudan’s top general Abdel Fattah al-Burhan signed the deal on Sunday with Hamdok to restore the transition to civilian rule nearly a month after a military coup.

The 14-point deal, signed in the presidential palace in Khartoum, also provides for the release of all political prisoners detained during the coup and stipulates that a 2019 constitutional declaration be the basis for a political transition, according to details read out on state TV.

“I should begin by saying that our country is guarded and preserved by God Almighty and whatever we reach at dead end, my fellow Sudanese people are capable of restoring our country back on course,” Hamdok said.

“When I then accepted the designation as an interim prime minister, I realised that the road was not strewn with roses, it would be a daunting task, fraught by risks and dangers. However, by joining hands, we can all prevent our country from plunging into the unknown. We should all come together to let the people decide who will take and hold the reigns of power.

“Signing this framework political agreement will open doors to address all the pending issues of the transitional period over the past two years and under this partnership we have managed to achieve a lot. We have brought Sudan back into the international community, lifted its name from the terrorist blacklist and many other achievements. However, we still have many challenges laying ahead,” he added.

It remains unclear how much power the government would hold.

The coup, more than two years after a popular uprising forced the removal of longtime ruler Omar al-Bashir and his government, has drawn international criticism.

Sudanese people have been taking to the streets en masse since the military takeover, which upended the country’s fragile transition to democracy.

The agreement comes just days after doctors said at least 15 people were killed by live fire during anti-coup demonstrations.

Hamdok was held under house arrest by military leaders for weeks.

“We will continue to work towards preserving the transitional period until all your dreams of democracy, peace and justice are achieved,” al-Burhan said after Hamdok’s reinstatement.CORRECTS SOURCE OF PHOTO – In this photo provided by the Sudan Transitional Sovereign Council, Sudan’s top general Abdel Fattah Al-Burhan, center left, and Prime Minister Abdalla Hamdok hold documents during a ceremony to reinstate Hamdok, who was deposed in a coup last month, in Khartoum, Sudan, Sunday Nov. 21, 2021. Burhan, said in televised statements that Hamdok will lead an independent technocratic cabinet until elections can be held. It would still remain under military oversight.. (

“Over the past five or six days, a group among ourselves has been making maximum efforts. All the credit goes to them for reaching this agreement and we believe this will pave the way for a totally and complete transitional period.”

The Forces of Freedom and Change (FFC) civilian coalition, which had been sharing power with the military, said it did not recognise any agreement with the armed forces.

“We affirm our clear and previously announced position: no negotiation and no partnership and no legitimacy for the putschists,” the FFC said in a statement.

Those who carried out and backed the coup should face justice, it said, calling on people to turn out for the latest round of anti-military protests on Sunday.

“The treacherous agreement signed today between Hamdok and al-Burhan is totally rejected, and concerns only its parties,” the pro-democracy group said in a statement.

Earlier on Sunday, thousands of protesters marched towards the presidential palace in the capital, Khartoum, ahead of the meeting between al-Burhan and Hamdok.

Demonstrators carried Sudanese flags as well as pictures of those killed during recent protests against last month’s coup, and shouted chants against al-Burhan. Tear gas was fired by security forces at protesters as they approached the presidential palace.

“Looking at the signing from today, [the PM] did seem to be still very much the hostage that he was until this morning. The streets have not been happy and these people continue to show their dismay at any sort of power-sharing agreement between the civilians and the military.

“It wasn’t merely about the release of Hamdok and the political prisoners. It was a much larger conversation about what Sudan’s political future looks like and frankly it’s not this.” 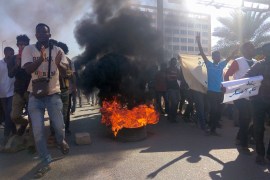 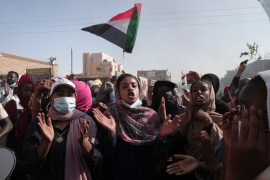 Teenager succumbs to his wounds after being shot in head by live rounds days earlier, taking protest death toll to 40.

Net blocking and journalist arrests, Sudan’s junta is stifling speech. And the rise of a far-right French journalist.