China has strongly criticised the United Nations over comments demanding the release of a citizen journalist jailed for her coverage of the country’s COVID-19 response.

The Chinese mission in Geneva voiced outrage on Saturday at what it said were the “irresponsible” and “erroneous” comments made by the UN rights office OHCHR on Friday in the case of Zhang Zhan.

OHCHR spokeswoman Marta Hurtado on Friday had expressed alarm at reports that the 38-year-old’s health was deteriorating rapidly and that her life was at serious risk from the hunger strike in detention.

“We call on the Chinese authorities to consider Zhang’s immediate and unconditional release, at the very least, on humanitarian grounds, and to make urgent life-saving medical care available, respecting both her will and her dignity,” Hurtado said in a statement.

Zhang, a former lawyer, travelled to Wuhan in February 2020 to report on the chaos at the pandemic’s epicentre, questioning the authorities’ handling of the outbreak in her smartphone videos.

She was detained in May 2020 and sentenced in December to four years in jail for “picking quarrels and provoking trouble” – a charge routinely used to suppress dissent.

She has conducted several hunger strikes to protest against her conviction, sentencing and imprisonment, and her family recently warned that she had become severely underweight and “may not live for much longer”.

Hurtado said the UN rights office had repeatedly raised concerns over Zhang’s case with the Chinese authorities since her arrest last year.

It had sought “clarification on the criminal proceedings taken against her as a consequence of what appear to have been her legitimate journalistic activities”, she said.

China has revelled in its success in keeping domestic COVID-19 infections down to a trickle of sporadic outbreaks.

But there has been little patience with those who threaten the official version by raising questions about the government’s early handling of the Wuhan outbreak.

Zhang is among a group of four citizen journalists – along with Chen Qiushi, Fang Bin and Li Zehua – detained after reporting from Wuhan.

In Saturday’s statement, Chinese mission spokesman Liu Yuyin insisted that “China is a country under the rule of law, and everyone is equal before the law”.

He decried that the UN rights office in Zhang’s case had turned “a blind eye to information provided by China through normal channels,” and instead, “based on hearsay, chose to interfere in China’s judicial sovereignty”.

He also highlighted China’s response to COVID-19, insisting that what the country “has achieved in combating the pandemic is there for everyone to see”.

Zhang was awarded the Reporters Without Borders’ (RSF) 2021 Press Freedom award for courage on Thursday.

“Her reporting from the heart of the pandemic’s initial epicentre was one of the main sources of independent information about the health situation in Wuhan at the time,” RSF said.

Meanwhile, hundreds of human rights lawyers have put their names on an open letter calling for her immediate release due to her ailing health. At least 40 human rights organisations have urged Chinese President Xi Jinping to release Zhang “before it is too late”. 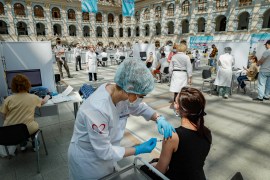 Censorship, misinformation during pandemic have had ‘a devastating impact’ on access to information, Amnesty says. 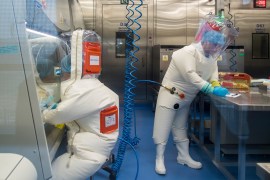 Chinese embassy in US decries fixation on ‘political manipulation’ after Biden orders intelligence review of origins. 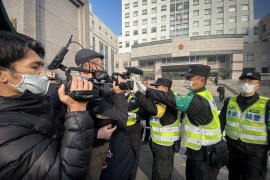 Reporters Without Borders says repression and attacks on press freedom worldwide increased during the COVID-19 pandemic.