France will postpone planned sanctions on the United Kingdom over a post-Brexit fishing rights row while negotiations continue, President Emmanuel Macron has said.

France had earlier threatened to impose targeted measures from Tuesday, such as stopping UK boats from landing in its ports and tightening customs checks.

But Macron, who on Monday met British Prime Minister Boris Johnson on the sidelines of the United Nations climate conference in Glasgow, told reporters the French plan was on hold pending the outcome of renewed talks aimed at solving the dispute.

“Since this afternoon, discussions have resumed on the basis of a proposal I made to Prime Minister [Boris] Johnson. The talks need to continue,” Macron said.

“We’ll see where we are tomorrow at the end of the day, to see if things have really changed … My wish is that we can find a way out on all these issues.”

The argument is centred on the number of licences the UK has handed French vessels keen to fish in its territorial waters following Britain’s departure from the European Union in December last year.

Paris says authorities of the UK and the Channel Islands have denied permits to French boats that have fished in waters where they have long sailed.

London argues it has granted 98 percent of applications to EU vessels, a proportion French authorities have questioned.

The UK has said a few dozen boats have been denied permits because they did not provide the required paperwork to back up their applications.

France said sanctions would not be applied before that meeting.

The UK welcomed France’s decision to hold off on the measures.

“We absolutely stand ready to grant more licences should the requisite evidence be provided,” a government spokesman said in a statement on Monday.

Earlier on Monday, the UK warned France it had 48 hours to back down from the threat of sanctions or face legal action under the Brexit trade deal it signed with the EU.

The UK and France have squabbled for decades over access to the rich fishing grounds around their Channel coasts.

The issue dogged the negotiations that led to the UK’s departure from the EU because of its political significance.

Reasserting the UK’s control over its fishing grounds was a central plank of the case for Brexit that Johnson presented to British voters.

Macron, meanwhile, faces re-election next year and wants to be seen as standing up for his nation’s trawler crews, a vocal political constituency. London says Paris must back down in acrimonious dispute over fishing licences as threat of French sanctions looms. 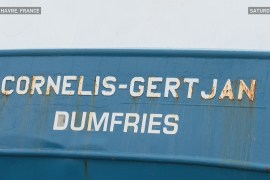 What’s behind the fishing dispute between the UK and France?

Both sides accuse the other of breaking post-Brexit agreements on fishing rights. 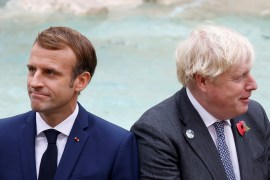