The leaders of the United States, Canada and Mexico have hailed their reinvigorated partnership after their first summit in five years, but nagging tensions over trade and immigration remained largely unresolved.

The so-called “Three Amigos” meeting in Washington, DC on Thursday was the first of its kind since 2016, after being discontinued when Donald Trump took over as president.

“Together as North America we stand strong, and look to better build back our communities, our infrastructure, and our shared future as integrated partners,” US President Joe Biden, Canadian Prime Minister Justin Trudeau, and Mexican President Andres Manuel Lopez Obrador said in a joint statement after the summit.

They agreed to meet again next year, this time in Mexico.

Biden, who took office in January, has sought to re-emphasise strong relations with Canada and Mexico as part of a wider effort to rebuild alliances and Washington’s support for international organisations.

The three countries are bound by the US-Mexico-Canada (USMCA) free trade agreement, which governs some $1.5 trillion a year in North American trade.

After the meeting, Biden said the array of challenges discussed, which included trade, migration, climate change, and the coronavirus pandemic, can be addressed “if we just take the time to speak with one another, by working together”.

Trudeau touted the “extremely strong ties” between the three countries, while Lopez Obrador hailed Biden’s re-engagement, saying “our relations must always be based on respect”.

Despite the positive statements, the meeting yielded few breakthroughs on several tense topics that continue to dog relations as the leaders seek to rebound from the fraught Trump years.

In addition to feuding publicly with Trudeau, Trump threatened to abandon the free-trade agreement and imposed tariffs on Canadian aluminium and steel.

He also declared a national emergency on the Mexican border and used incendiary and xenophobic language about undocumented migrants crossing the border with Mexico, although he ultimately forged a working partnership with Lopez Obrador.

Still, Canada and Mexico see echoes of Trump’s “America First” approach in some Biden policies, particularly as he seeks to reinvigorate the slumping US industrial sector.

Mexico and Canada have voiced alarm over a Biden proposal for a tax credit encouraging US production of electric vehicles. Cars and trucks are the most-traded manufactured product between the three countries

On Thursday, Trudeau told reporters that Ottawa would “continue to do the work necessary to not just highlight our position but find solutions” after the summit did not yield any shifts on Biden’s plans.

Another sticking point is Biden’s “Buy American” policy for the federal government in its plans to replace its huge fleet of automobiles, which Canada has called undisguised protectionism.

Mexico’s Economy Minister Tatiana Clouthier, who attended the meetings on Thursday, had previously called on the US to abandon its “Buy American” agenda and instead focus on “Buy North American”.

In brief remarks to reporters during a bilateral meeting between Biden and Lopez Obrador – the first since the US president took office – the duo also said migration was among the main issues they were discussing.

The Biden administration has been struggling to contend with a surge of undocumented border crossings. Mexico, meanwhile, has long complained that the US immigration policies put an undue burden on its authorities.

Speaking to reporters after the summit, Mexican Foreign Minister Marcelo Ebrard said the US had agreed to further invest in Central America and southern Mexico development to create opportunities and to help curb migration. The Biden administration later confirmed the investment boost, but did not specify the amount.

The White House later released a list of “key deliverables” from the meeting, including agreements by Canada and Mexico to boost donations to global vaccine effort, a North American plan to cut methane emissions, and a strategy for the three countries to strengthen supply chain vulnerabilities.

The leaders also committed to banning imports of goods made with forced labour, a policy Biden’s administration has aimed at China. Activists and Western politicians accuse China of using forced labour in its western Xinjiang region, an allegation Beijing denies. 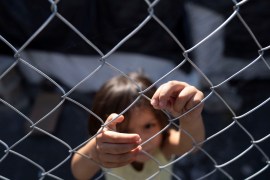 The US reopened its borders this week to non-essential travellers, but most asylum seekers continue to be turned away. 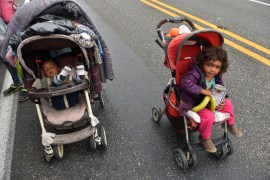 Mexico allows some in migrant caravan to stay, others push to US

The caravan set off from southern Mexico in late October, with numbers dwindling amid gruelling conditions. 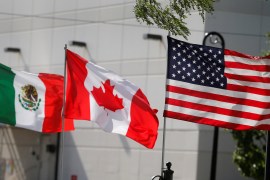 US, Canada, Mexico leaders to meet in first summit since 2016

Biden, Lopez Obrador and Trudeau to renew regional relationship with economy, immigration among issues of discussion.