Sokolka, Poland – On Thursday evening, Polish medics walked through the thick, gloomy forests covering the Polish-Belarusian borderland searching for refugees and migrants who needed their assistance.

Having received distress calls, the medics from PCPM, the Polish Centre for International Aid, came across a Syrian couple whose arms and legs were wounded, and a man with strong stomach pain caused by severe dehydration.

They had been hiding in the forests for weeks.

According to the Syrian woman’s testimony, her one-year-old baby died a month earlier in the woods. It was not clear on which side of the border the tragedy occurred.

Their cases add to a growing number of reports of people suffering from health issues such as hunger and hypothermia as they camp out in the Polish forests near the Belarusian border, hiding from Polish border guards and waiting for a chance to travel deeper into the European Union.

Al Jazeera was unable to independently verify the Syrian woman’s claim of her baby dying.

Aid workers say about a dozen people have died on both sides of the Poland-Belarus border in recent weeks as a migration crisis escalates; the real number is widely believed to be much higher.

Several kilometres away, in a hospital in the eastern city of Biala Podlaska, Ruba, a 38-year old Syrian woman, also grieved the loss of her child.

She was pregnant when she crossed from Belarus and entered the unwelcoming Polish woodlands.

It was unclear when she miscarried.

Each time doctor Arsalan Azzaddin, a specialist in internal medicine who is treating her now for COVID-19, asks her the question, she cries.

Ruba came to Poland with her husband and five children.

They are currently in a migrant detention centre close to the Belarusian border. According to Ruba, they can stay in Poland until January. But is unclear what will happen to the family after that.

Since the crisis at the Polish-Belarusian border began in August, thousands of migrants and asylum seekers have been wandering through Polish woods with little or no access to clean water, food and shelter.

PCPM and other NGOs said they have seen fewer cases of people needing medical assistance in recent days; this suggests that either crossings of the frontier have slowed, possibly due to strengthened border security on the Polish side, or that people are hiding further in the forests and are fearful to come forward for assistance.

There have been reports that people who are hospitalised are often arrested by Polish forces when they are discharged.

“Practically all the patients I dealt with suffered from hypothermia, dehydration, also pneumonia, stomachaches, wounds. Many people had signs of beatings on their bodies. Every case I had was tragic. It’s impossible to describe what one feels when they see people in such a condition,” said Azzaddin, a doctor from Erbil, in Iraqi Kurdistan, who has lived in Poland since 1980.

This is the first time in his career to be treating so many of his countrymen; the majority of people stranded in the Polish forests are reportedly from Iraqi Kurdistan.

“The case that shook me the most was a young boy, a 22-year-old Kurd from Iraq. He was completely unconscious, he had a very high sugar level, he didn’t eat anything that day and only drank raw water from a plastic bottle,” Azzaddin said.

“When someone takes insulin, they have to eat properly after each dose. He had nothing to eat so he asked a Belarusian guard for a piece of bread. The guard sold it to him for 40 dollars. Each story is a tragedy on its own. Working and listening to these people is hard. They only ask for one thing: please don’t let us return to Belarus.”

Polish guards have been pushing migrants back to Belarus throughout the crisis.

According to refugee testimonies, Belarusian guards do not let people back in. Amid beatings and threats, they force refugees to try and enter Poland again.

As a result, thousands are stuck in limbo, hiding from Polish guards and wandering the forests for weeks or months. For some of them, the journey proves deadly.

‘It’s all facilitated by Belarus’

Poland and its Western allies hold Belarus responsible for the deteriorating situation, claiming that Minsk is trying to destabilise Europe.

Earlier this year, Belarus removed visas for citizens of a number of Middle Eastern and African states and opened numerous tourist agencies offering an easy and cheap way to get to Europe.

Critics say the move might be a Belarusian act of revenge against Poland, which supported last year’s protests against longtime President Alexander Lukashenko.

“It’s not a typical migration or humanitarian crisis,” Wojtek Wilk, PCPM’s head and a UN expert in crisis management told Al Jazeera. “Because if you go to the core, the decision to escape or leave the place of residence and seek protection or shelter somewhere else is a spontaneous decision made at the level of a family or small community.

“Here, there is nothing that is spontaneous. It’s all facilitated by the government of Belarus.”

Wilk, whose organisation manages the provision of medical and humanitarian assistance at the border, worries that in the coming days and months, the humanitarian crisis will worsen.

“We’re going to have the first snow by Tuesday next week. As of Monday, the temperatures will go below zero during the night. So the conditions will be very difficult. Nobody can survive such conditions in a tent. People are on the road for many weeks and they are already weakened and sick and have different cold-related diseases,” he said.

“If snow comes, it will be impossible to wander through the forests. I’m really concerned about that and in this case, hypothermia and frostbite will really skyrocket up to a time when the movement stops.” 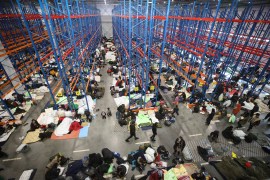 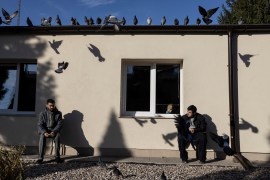 Hundreds of Iraqis repatriated from Belarus amid border crisis

The boarding gate was busy for the Iraqi government’s charter flight, but many more Iraqis remain in Belarus and Poland. 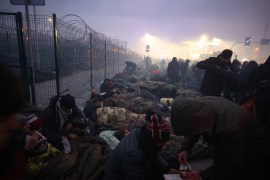 Standoff at the Belarus border

What’s next for the people caught in the Belarus-EU border crisis?