The longest partial lunar eclipse in nearly 600 years has bathed the Moon in red as sky-watchers around the world enjoyed the celestial show.

The Moon appeared red to observers in North America and parts of South America from 06:02 GMT on Friday and was expected to be later seen in Polynesia, Australia and Northeast Asia.

The lunar disc was almost completely cast in shadow as it moved behind the Earth, reddening 99 percent of its face.

The spectacle lasted more than three hours and 28 minutes, marking the longest partial eclipse since 1440.

Space scientists expect it will not be repeated until the far-off future of 2669. A longer total lunar eclipse, however, is expected on November 8, 2022, NASA said.

During a lunar eclipse, the Moon turns red because the only sunlight reaching the Moon passes through Earth’s atmosphere. This is a phenomenon known as “Rayleigh scattering”, where the shorter blue light waves from the Sun are dispersed by particles in the Earth’s atmosphere.

“The more dust or clouds in Earth’s atmosphere during the eclipse, the redder the Moon will appear,” a NASA website explained.

“It’s as if all the world’s sunrises and sunsets are projected onto the Moon.”

Friday’s was the second and the last lunar eclipse of the year. NASA expected it to last until 12:04 GMT.

The remarkable length of the eclipse was attributed by NASA to the Moon’s orbital speed and the near-totality of the eclipse. As sometimes the Moon is closer to the Earth and sometimes it is farther away, this change in distance affects the Moon’s orbital speed. Since this eclipse was almost-total, the Moon also spent more time in the Earth’s umbra than it would in a “more partial” eclipse. 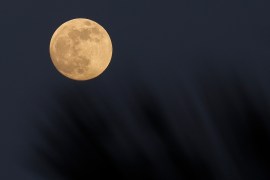 Phenomenon occurs when a total lunar eclipse coincides with the moon being at its closest point to Earth. 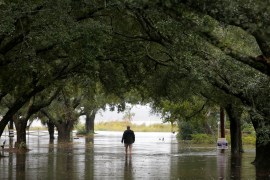 The combination of the Moon’s natural cycle and climate change is projected to cause flooding to surge in the 2030s. 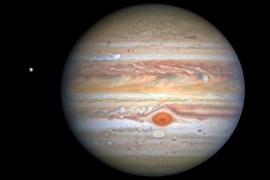