Since the early summer, the mobile phones of Armenian and Azerbaijani military combatants have provided partial but dramatic accounts of a new and evolving confrontation between the two countries.

Back in May, soldiers filmed themselves overrunning enemy outposts shouting in broken Russian at their opponents to leave, orchestrated with kicks to backsides, punches or volleys from assault rifles fired into the air.

In picturesque alpine meadows, platoons of Armenian and Azeri troops faced off, often just a few metres apart. It was a tinderbox that burst into flames on the afternoon of November 16.

While there is no independently verifiable information, military sources and local media reported a full-scale battle for several hours along a stretch of border between Azerbaijan and Armenia on or near Mount Ishkhanasar.

Both sides have reported casualties; Armenia said at least six soldiers were killed, while Azerbaijan announced the deaths of at least seven troops.

Harrowing video shot at night in a blizzard appears to show Azerbaijani soldiers beating uniformed Armenian regulars on the ground.

This is Armenia and Azerbaijan’s new conflict: for control of disputed borders defined by Soviet cartographers.

Until the last year’s war over the Nagorno-Karabakh region, those borders were buffered by territories inside Azerbaijan under de facto Armenian control since the 1990s.

But with Azerbaijan’s military victory and the recapturing of almost all of its lost territories, the border areas between Armenia’s Syunik and Gegharkunik provinces, and Azerbaijan’s newly established East Zangezur region have become militarised front lines.

Olesya Vartanyan, a senior analyst with the Brussels-headquartered International Crisis Group, said that in the mountainous terrain, both armies are keen to establish positions on the best available ground.

“The current daily problem is that troops of opposite sides do not have communication with each other. The same is between Azerbaijani and Armenian Joint Staffs. When one side observes several big trucks with soldiers, he right away suspects possible preparations for an assault. There is no way to check before starting an attack.”

Syunik Province separates Azerbaijan from its exclave, the Nakhchivan Autonomous Republic, in some places by less than 40km (25 miles).

Armenia’s Human Rights Defender Arman Tatoyan has accused Azerbaijan of a deliberate policy of isolation, describing the nearly impassible alternative routes villagers have been forced to take. School children and teachers have been unable to get to school.

“The blockade of the Goris-Kapan road or the so-called Azerbaijani border and customs checkpoints will cause violations of the rights of the civilian population and severe humanitarian issues, including the isolation of a number of civilian communities,” Tatoyan told Armenian media.

While Azerbaijan maintains that Armenia provoked the latest fighting, geolocation of some of the footage recorded since Tuesday strongly indicates incursions by Azerbaijani armed forces inside Armenia proper.

Armenia’s Prime Minister Nikol Pashinyan claimed on Tuesday that since May, 41 square kilometres (15 square miles) of sovereign Armenian territory have been seized by Azerbaijan in the border areas.

Azerbaijan may have a strategy: to pressure Armenia to conclude negotiations following last year’s ceasefire agreement over Nagorno-Karabakh.

Those terms included a commitment by Armenia to allow “unobstructed access” between the Nakhchivan Autonomous Republic and Azerbaijan.

Fuad Shahbaz, a military analyst from Baku, says the latest fighting is a result of those negotiations failing to achieve their objectives, including the demarcation of the borders.

“Yerevan is not ready for concessions on a transit route and I guess Baku lost patience. It was hoping to resolve the issue before the winter during a planned November meeting in Moscow which was postponed.”

While Shahbaz believes the opening of a route to Nakhchivan would benefit both Azerbaijan and Armenia by linking up with Turkey, for many Armenians it poses a direct threat to Armenian statehood.

Russia’s military presence in Armenia is supposed to guarantee Armenian security, and Russian boots on the ground in Karabakh are helping to maintain a fragile peace, albeit with occasional outbreaks of localised violence.

So far, Armenia has not officially requested Russian military intervention as part of its Collective Security Treaty with Moscow. But Moscow can exert influence in a way that no other mediator can.

“It is the only regional power with an actual military presence on the ground and a serious political say with leaders in both capitals. So it’s no surprise that Moscow is succeeding. Especially where the OSCE Minsk Group has been struggling to renew its functions,” said Vartanyan.

The so-called Minsk Group is co-chaired by Russia, France and the United States and was established in 1994 after the first Karabakh war to work for a permanent peace between Armenian and Azerbaijan.

“Only recently the co-chairs found a way to propose an agenda and a format that can satisfy both sides. But they still have a long way to go before conversations that can lead to real change.”

An intervention by Russia’s Defence Minister Sergey Shoigu led to a cessation in the fighting on November 16.

For the time being, the guns are silent. 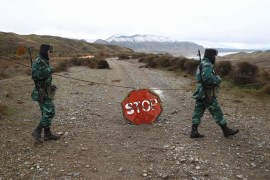 Several people have been killed and injured as de-mining agencies say lack of resources slows efforts to clear weaponry. 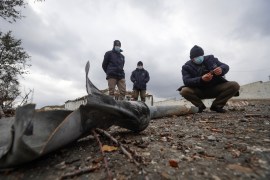 Are Azerbaijan and Armenia ready to improve relations?

One year has passed since the Nagorno-Karabakh war and there are hints that diplomatic ties could be built. 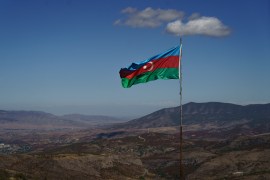